At the height of the fire, nine appliances and about 30 firefighters battled to contain it.

It was decided to immediately escalate the response to ‘‘third alarm’’ and further crews arrived from Milton, Lawrence, Clutha and Balclutha, Ms Higgison said.

Three buildings on the farm caught fire, but firefighters were able to quickly extinguish two and contain the blaze to one 40m x 10m shed.

Crews remained at the scene all day and by 3.45pm four appliances and associated teams were on site to assist a fire investigator. 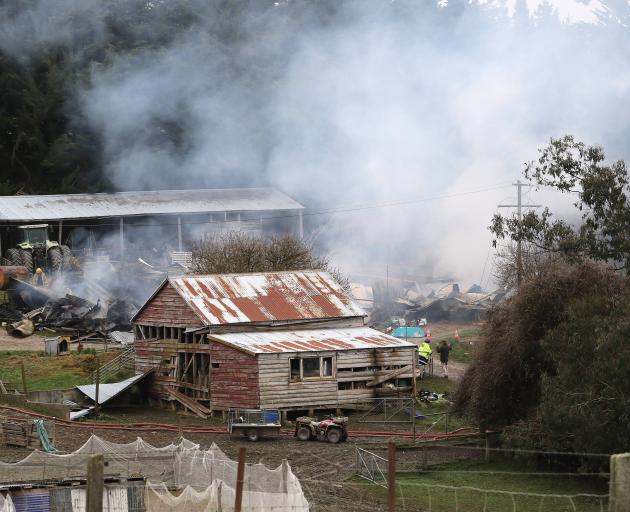 Fire crews assess the damage and dampen down the remains of a large shed that was destroyed by a blaze on a farm between Lawrence and Balclutha. PHOTO: JOHN COSGROVE

At the time of printing, no cause of the blaze had been ascertained but the shed had been destroyed.

Ms Higgison confirmed neither people nor livestock had been trapped inside.

The Otago Daily Times had been unable to confirm the name of the property, but the fire occurred between Roberts Rd and Burma Rd intersections on Mount Stuart Rd, Johnston.

Pioneer Energy, owner a wind farm on the opposite side of the road, confirmed the fire had not affected its infrastructure.