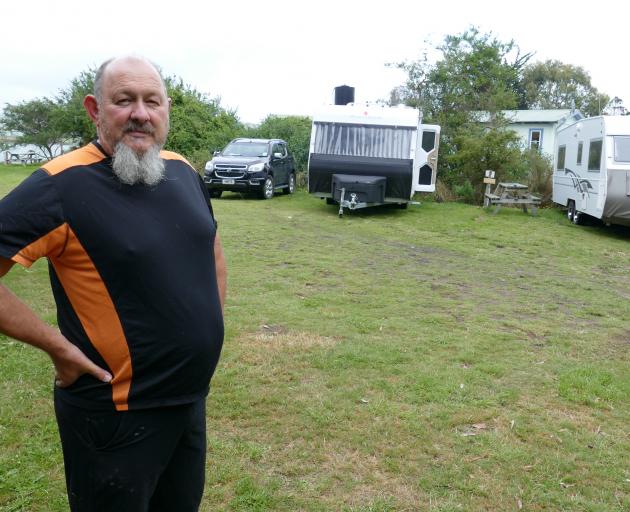 The council formulated the trial to address previously uncontrolled freedom camping in the area by limiting free options, while generating additional ‘‘overflow’’ business for the area’s commercial campgrounds.

But Newhaven Holiday Park owner Grant Gabolinscy claimed the trial was costing his business, 6km southeast of Owaka, more than $800 a week.

‘‘We’ve been full during peak season the past three years, but have averaged three camper van berths empty this season, which equates to about $800 a week.

‘‘We’re just not seeing the overflow benefits [Clutha Mayor] Bryan Cadogan described. And those who are coming as a result of the freedom camping ban do so grudgingly, which ends up in bad reviews online.

‘‘I understand the theory, but it’s not been properly thought out, he said.’’

Mr Gabolinscy’s experience was in sharp contrast to that of Whistling Frog Resort owner Paul Bridson.

Mr Bridson said the resort — which provides a mixture of camping, cabins, motels and chalets — had received ‘‘double’’ the number of guests this season.

He attributed growth at the resort, 38km southwest of Owaka, at least in part to the council’s new restrictions on freedom camping.

‘‘I’ve noticed many of the previous freedom camping hot spots are nearly empty and much tidier this summer. And there’s a buzz of extra people in Owaka, which has to be good for everyone.’’

The other factor influencing growth was public awareness, he believed.

‘‘We’ve recently rebranded and improved our exposure in the district and online. If you discover you can’t camp where you like, next you go online or remember the big new sign you saw. Perhaps others just aren’t capitalising on the opportunities provided by the change.’’

Mr Cadogan said, to date, the trial had justified itself.

‘‘There’s been pleasing progress on most of the key objectives and we haven’t experienced any clear issues.

‘‘The wider public concerns in previous years of mixed messaging, or unpleasant surprises in driveways, has basically been non-existent this year.’’

He acknowledged not all commercial operators had seen a boost to business under the trial, but said it was ‘‘up to the campers themselves’’ to stay at a campground or leave the area when the free site was full.

‘‘Council has had no other option than to take a pragmatic approach [to this issue], as no perfect solution exists.

‘‘The trial has given us a strong factual base to establish a more permanent stance.’’

Lets be honest here, this is a Motorhome & Caravan trial, "NOT" a freedom camping trial.

Under the definition in the Freedom Camping Act (FCA), motorhomes & caravans are less than 25% of all freedom campers.
The definition provides for camping in 'tents' which are unable to be 'certified self contained' and therefore not included in this trial.

People who are freedom campers under FCA, include anyone that camps with 200 metres of a 'motor vehicle accessible area' - that motor vehicle could be an off road type motorbike!

Some of the people who use tents to camp (and are potentially included in the definition) include Cyclists, Hunters, Kayaker's, Mountaineers, Trampers, Anglers, Bird watchers and many others.

That the survey released this week by Ministry of Business, Employment and Innovation (MBIE), was targeted only at Motorhome and caravan owners demonstrates the Government would rather forget the other group's that are defined by the FCA.

Unfortunately Legislation does not allow that to happen legitimately.

It is high time Government and Councils considered all Freedom campers defined by the Act and stopped bowing to the wishes of as large RV club.