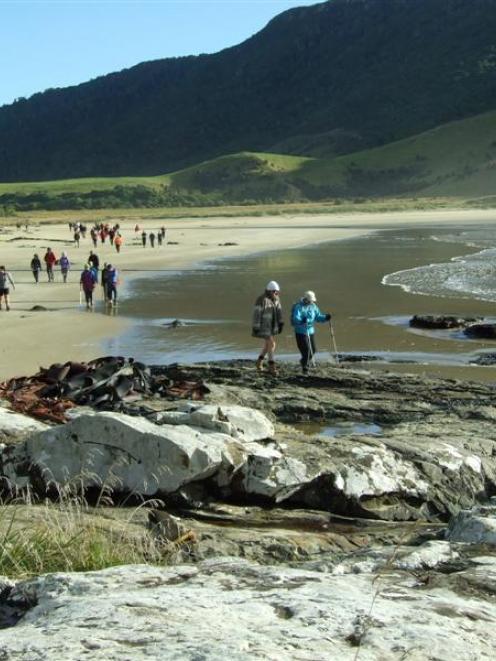 Walkers set out from Purakaunui Bay (Catlins) during the Catlins Great Escape Coastal Walk in April. The walk followed the coastline from the bay to Papatowai. Photo by Helena de Reus.
Dates have been set for the next Catlins Great Escape events after a successful year.

The fifth Catlins Great Escape Bike Journey is planned for April 12 and 13 next year, and will see riders complete 110km in two days, starting in Owaka and finishing at Tokanui.

Along the way riders will enjoy the sites and attractions for which the Catlins is famous - remote beaches, rainforests, waterfalls and the Catlins wildlife.

Catlins Coast Incorporated projects co-ordinator Kim Dodds said this year's event had riders getting off their bikes and exploring parts of the Catlins by foot, which proved to be a popular feature of the event.

Next year's event will involve a similar concept.

''This event has become a great way to experience our unique environment,'' Mrs Dodds said.

The events were developed in conjunction with the community, with money from the event directed into community projects for sustainable tourism development, she said.

The event had good sponsors and organisers were pleased the Mataura Licensing Trust had confirmed its sponsorship for the 2014 event.

Organising the Catlins Great Escape Coastal Walks was also under way after another successful year.

Walks are planned for both February and March - one in the South Catlins and onein the North Catlins.

Mrs Kim Dodds said the events were both exciting and well supported, but could not be run without landowners' co-operation.