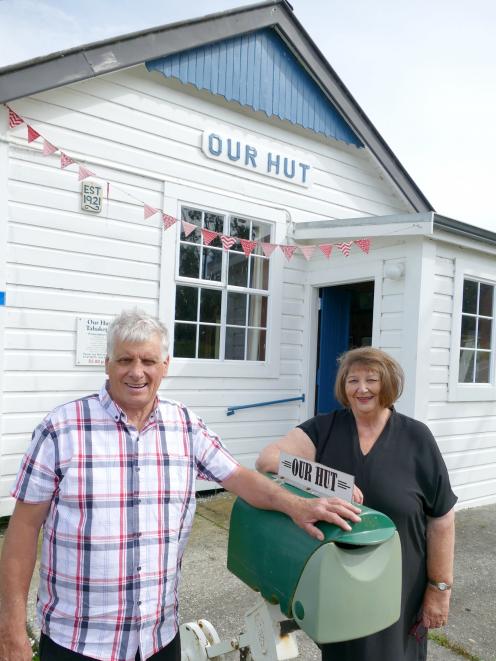 Our Hut Tahakopa committee members Don and Eleanor Sinclair take a break from preparing the community hub on Thursday, for its centenary celebrations on December 5. PHOTO: RICHARD DAVISON
A historic Catlins meeting place will have its 100th anniversary celebrated next weekend.

"Our Hut", in the remote township of Tahakopa, has weathered a century of continual community use, and its committee hopes all those with links to the area will come to help mark the occasion, on December 5.

To comply with Covid-19 regulations, organisers will be erecting gazebos on the surrounding lawns, as the hut itself is a mere 54sq m.

Spokeswoman Eleanor Sinclair said the hut’s cosy confines might in part have been responsible for its continued survival and popularity, despite a second, somewhat grander community hall existing just 80m along the road.

"The hut was originally built as a Baptist church, by local sawmilling family the Wrights.

"It still holds fellowship every fortnight but, over the years, many more groups have come to use it, and members of the public can also hire it for weddings and the like.

As Tahakopa had enjoyed something of a reputation for drunken debauchery during its earlier, sawmilling days, the hut’s constitution included a specific clause that no alcohol could be consumed on the premises, Mrs Sinclair said.

As a result, the hut had remained a haven for more civilised pastimes, such as Women’s Institute meetings, card playing, library services and community meetings.

She and Mr Sinclair had helped lead a $50,000 restoration of the hut in 2016, which included work to piles, drains and the kitchen, and the purchase of new chairs and a heat pump for comfort.

In 2019, the committee renamed the facility Our Hut Heritage Hub, as it had begun to acquire an informal role as a museum and archive for local history.

Nowadays, the committee also involved itself with other community projects, such as the opening of a recent walking track in honour of one-time Tahakopa resident, Sir Truby King.

The celebration next Sunday would be a "low-key" affair, Mrs Sinclair said.

"At 11am we’ll have a church service; then my brother, Grant Martin, will launch his local history book about the hut.

"Then we’ll finish with a cup of tea and some finger lunch, and no doubt share an interesting story or two."