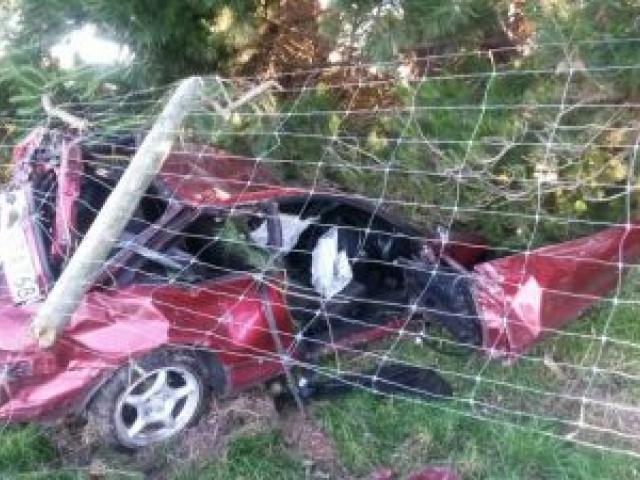 The wreckage of a car in a paddock near Clydevale last night. Photo by Hamish MacLean.
A man was flown to Dunedin Hospital with serious injuries after being thrown from a vehicle in South Otago yesterday.

Emergency services were called to Clutha River Rd, near Clydevale, at 5.45pm, following reports a passenger was trapped under a branch downed in the crash.

''You couldn't even see the car. It was right through the trees, wrecked in the paddock,'' Clydevale Senior Station Officer John Kee said.

Volunteer firefighters helped secure the large pine branch pinning the man, who was ''talking to us when we got there''.

St John officers helped remove the 30-year-old, who was taken to Dunedin Hospital by the Otago Regional Rescue Helicopter.

He remained in hospital last night with serious injuries.

The 25-year-old female driver of the Ford Probe was taken to the Balclutha Medical Centre with minor injuries.

Police were investigating whether alcohol or speed were factors, Senior Sergeant Craig Brown, of Dunedin, said.

It was too early to say whether the passenger had been wearing a seat belt.

The pair was travelling from Clydevale towards Hall Rd when the driver lost control on a moderate bend, the car sliding across the road into a tree, he said.