Rongahere Rd, near Beaumont, is closed after the crash that claimed Nigel Beck's life. Photo: Craig Baxter
A Balclutha man died after the truck he crashed had been overloaded because of a "rule of thumb" his colleagues had relied on, a court has heard. 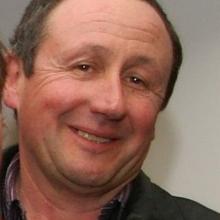 Nigel Beck.
Rather than weigh and measure pre-cast concrete panels being loaded on to the trailer to be transported the next day by Nigel Beck, staff at Calder Stewart Distribution relied on a docket from the manufacturer.

The weight of the trailer itself had not been taken into account, the three panels were not secured properly and the load was unbalanced.

The Milton-based company appeared in the Dunedin District Court yesterday after admitting a charge under the Health and Safety at Work Act.

He said Calder Stewart had been "grossly negligent".

Next door to the site where the truck was parked overnight on January 15 last year was a weighbridge.

Had it been used, Mr Beck would not have been allowed behind the wheel in the morning.

The company had been contracted by another firm since late 2017 to move the concrete from Balclutha to Frankton.

He had worked at the company since 2012 and had never had an accident.

Because the work shifting the massive concrete panels was seen by the company as high risk, only its top drivers did the work.

In an independent assessment of his capabilities in 2016, Mr Beck had been deemed "a very good driver".

Less than an hour into the trip, he took a left bend on Rongahere Rd, near Beaumont.

The truck and trailer rolled right, causing significant damage to the cab, and the panels slid 25m down the rural road before coming to a stop.

Mr Beck died at the scene from severe neck injuries.

An investigation by the police Serious Crash Unit found the trailer was overloaded and revealed the other deficiencies, which prompted the WorkSafe prosecution culminating in yesterday's sentencing.

Calder Stewart's own risk register at the time of the incident, the court heard, identified the hazard of overweight loads destabilising trucks or causing trailer tip-overs.

"The control method recorded was for the driver to be provided with panel details, including the actual panel weight and dimensions, prior to loading, and records that the driver is responsible for ensuring the load is safe to transport," a summary of facts said.

Mr Beck received no such information.

Judge Phillips said it was a case of the company "talking the walk but not walking it".

Since then, Calder Stewart had stopped using A-frames for transporting goods, used a computer system to plan loads and had ordered crane scales.

Meanwhile, WorkSafe had released a publication regarding the transportation of concrete panels.

He said the death of his father had brought them anger and grief.

The wider family were in the process of reuniting and the tragedy had robbed them of the completion of that process.

Mr Beck's son attended a meeting with Calder Stewart representatives, which he said had provided clarity and he appreciated the steps they had taken.

In a statement, chief operating officer Darren Evans accepted the shortcomings highlighted by the prosecution.

"Our thoughts are with the family of Mr Beck. He was a highly valued employee of Calder Stewart and, quite simply, the accident should not have happened," he said.

The court heard the firm had immediately paid the victim's family more than $35,000 and a further $110,000 after the restorative justice conference.

NZ should have a right to sue.
Compensation should not
be contingent upon RJConference, which is not compulsory for victims to attend.