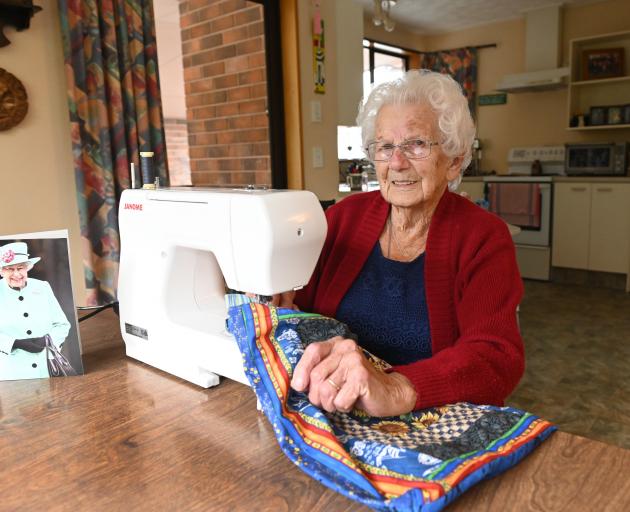 Ina Panting of Balclutha turns 100 on Sunday. Mrs Panting lives in her own home, sews bags for charity, knits and does the Otago Daily Times Code-Cracker every day. PHOTO: LINDA ROBERTSON
Balclutha woman Ina Panting is showing no signs of slowing down, despite turning 100 this Sunday.

Quick-witted, cheerful and still doing her bit for local good causes, Mrs Panting put her good health and longevity down to a combination of factors.

"I’m very fortunate really. I still drive, cook for myself, and can get around on my own two legs and see well enough to sew and knit.

"I don’t know if I have a secret particularly.

"I can’t stand sitting idle, but I think it’s probably just the way you’re made.

The former hotel manager and mother-of-five said keeping busy was a way of life.

Mrs Panting’s daily routine began with a widely-practised Southern tradition, rifling through the pages of the Otago Daily Times for a certain page.

"It’s important to keep your mind active as well as your hands, so I like to do the Code-Cracker in the ODT each day.

"Then I might go out for a drive and do some shopping, and get my sewing machine out later on."

A prodigious seamstress and knitter, she was noted among local charities, friends and family for her contributions.

"We tried to do a count, and I reckon I’ve made more than 800 shopping bags since we got rid of the plastic ones.

"I just use scraps from op-shops, and that people drop off for me. I love to sew and knit."

The tireless near-centenarian was also a member of two local friendship societies, and filled any other spare time with light walking and gardening.

Despite being an only child, brought up by "Gran Old" and her father in Milton after her mother died during Mrs Panting’s infancy, Mrs Panting went on to have a large extended family of her own with husband of 73 years George, who died five years ago.

Among other well-wishers during recent days was the Queen (96), whom she joked would be due a card herself before long.

"She must have a very big birthday book. Perhaps I’ll make her a bag for her 100th when it comes."

In the meantime, the unflappable Mrs Panting would continue to take the modern world in her stride.

"The advances everything continues to make are amazing. It’s hard to comprehend what a wonderful world it’s become.

"I count my blessings every day."