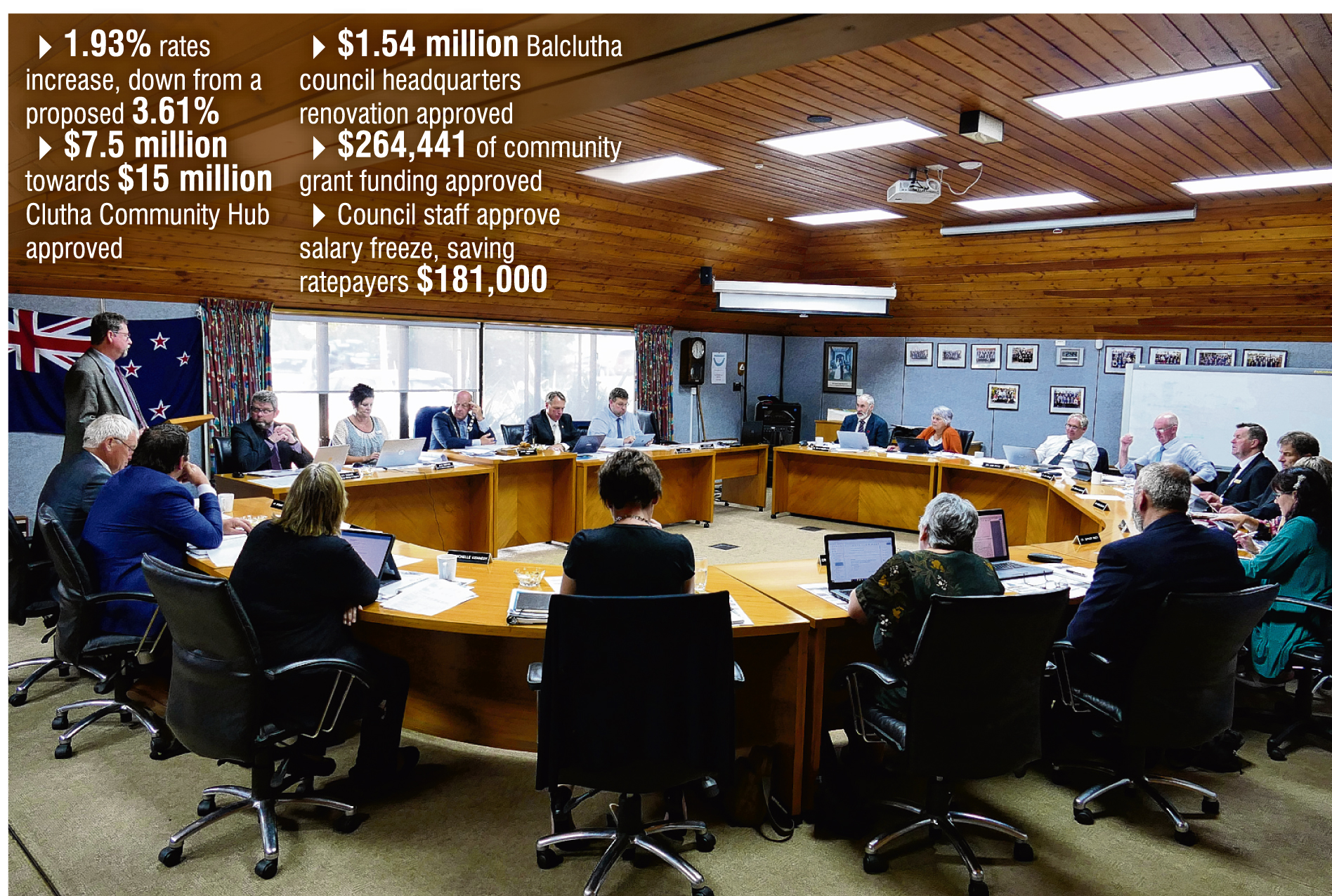 The Clutha District Council has resolved a 1.93% rates increase for the coming year.

The lower-than-expected rise was reached during more than six hours of annual plan deliberations, conducted in socially-distanced Balclutha council chambers and broadcast online on Thursday.

Although the figure falls short of the 0% rise signalled by some neighbouring councils, it comes close to halving a provisional increase of 3.61% proposed in Clutha’s annual plan consultation document.

Targeting rates distress among the worst affected, the council will also establish a working group with access to $100,000 of discretionary funding.

And in a gesture towards hard-hit enterprise, the introduction of significant new trade waste fees that had caused alarm among some business owners has been postponed until July next year.

During the meeting, Clutha Mayor Bryan Cadogan said keeping rates as low as possible was critical, given the economic challenges faced by ratepayers as the district emerged from Covid-19 lockdown.

Although he had advocated for a 0% rise to illustrate the council’s "compassion" towards ratepayers, he expressed satisfaction the council had been able to retain key upcoming projects on its programme, while reducing the overall figure.

Looming largest among those projects was the controversial replacement of Balclutha’s 58-year-old War Memorial Hall with a new, multi-purpose Clutha Community Hub.

In the event, the $15million project was given the go ahead by 13 votes to two.

Ratepayers will pay up to half that cost, and the council hopes to secure Crown Infrastructure Partners "shovel-ready" co-funding for the remaining 50%.

Alongside several smaller cuts helping the council reduce its rates figure, most significant was a saving of $181,000 in wages due to a staff salary freeze, effecting a 0.68% rates reduction.

Several councillors thanked staff for their gesture, which had been made with the full agreement of affected employees, including senior management.

On the debit side of the ledger, councillors voted by a narrow margin to spend $1.54million renovating their Rosebank, Balclutha headquarters.

While acknowledging the timing of the project was unfortunate, Mr Cadogan said the modifications were essential to improve health and safety.

The proposal, which would also replace the building’s asbestos roof, was resolved by eight votes to seven.

A total of $264,441 of grant funding was awarded to the district’s community groups and facilities.

The Cross Recreation Centre, in Balclutha, also received a $26,749 grant towards building improvements.

The biggest loser was the South Otago A&P Society, whose request for $20,000 to help replace asbestos roofing was declined.

The grant for Milton area social development initiative Project Bruce heralded a turnaround in its fortunes.

On being passed by nine votes to six, the decision was greeted with a whoop of delight from Bruce ward Cr Gaynor Finch.

In August, the group had signalled it might have to wind up this year, after Department of Internal Affairs seed funding lapsed.

A similar appeal to the council for operational funding last year fell on deaf ears, and just $7244 was awarded.

Thursday’s 2020-21 annual plan decisions will be formally adopted on June 11.

Well done CDC to minimize increases when the rest of us are getting no pay rises or losing jobs. Big thanks to the staff who have agree to pay restraint. The commitment and dedication of the CDC is outstanding and appreciated.