Overall satisfaction in the council was down 4%, to 77%. PHOTO: RICHARD DAVISON
The Clutha District Council says it is satisfied with its latest ratepayer review, while acknowledging it has room for improvement.

The council has carried out an annual "resident satisfaction survey" since 2013.

Following the release of its 2020 edition last week, council chief executive Steve Hill said while many areas showed continued high ratings or improvement, more could be done in areas such as roading.

Ratings for maintenance of both sealed (77%) and unsealed roads (47%) were down, in part due to the survey’s timing, he said.

"The survey was conducted in mid-February to March and ... reflects we had flood damage being repaired across the network, grading that tapered off, and reductions in maintenance metalling [having] an impact on perceptions." 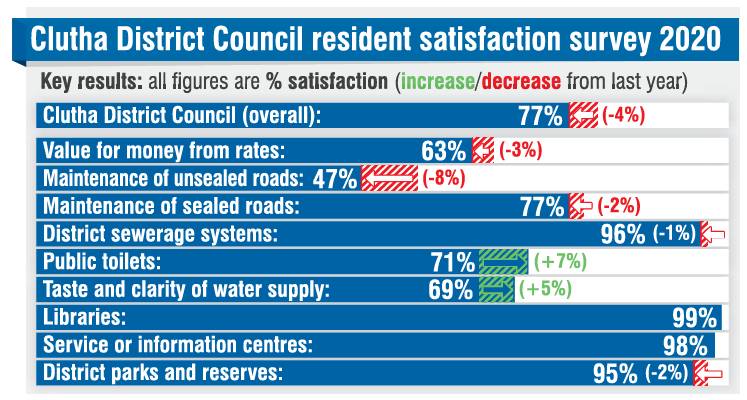 "We haven’t defined ... what’s necessary to achieve satisfaction on unsealed roads yet, and whether residents’ expectations of satisfaction are affordable and achievable. Until we do, it is a factor of grading and metalling to meet a budget ..."

He said a "ballpark" cost to seal Clutha’s gravel roads would be $1.2 billion.

The council continued to strive for improvement.

"We are putting a lot more effort into service requests with our additional capacity, and are now looking at measures of performance across the network."

"Libraries, service and information centres continue to score well (99% and 98%), confirming the high esteem in which these local services are held.

"And both Mt Cooee Landfill and the wheelie bin service achieved the highest level of satisfaction in the past six years of surveying (94% and 96%)."

Overall satisfaction in the council was down 4%, to 77%.

Clutha Mayor Bryan Cadogan said this was within acceptable bounds.

"Across the spectrum of activity, the underlying theme was that this year was virtually the same as previous years, with only slight variations.

"While the survey [shows] we need to focus more in certain areas, it should be taken in context, with many areas showing improvement."