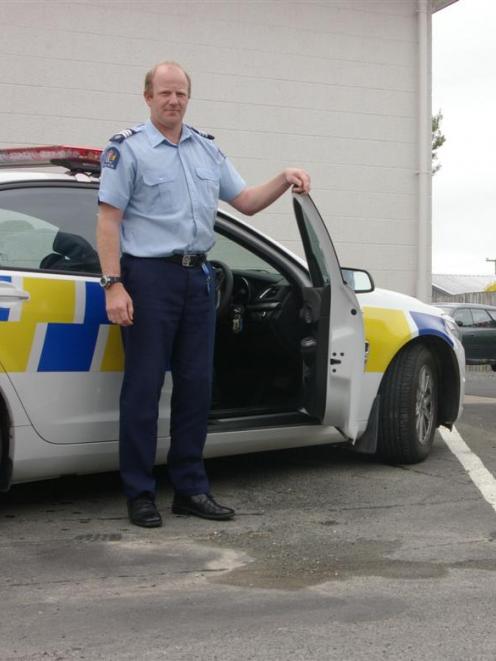 After 17 years policing his hometown of Balclutha, Sgt Craig Dinnissen has accepted a role at the Southern District Command Centre in Dunedin. Photo by Hamish MacLean.
The murder of 18-year-old Michael Hutchings in Kaitangata is one of the memories Sergeant Craig Dinnissen will take with him as he contemplated his last day on the job yesterday in his hometown of Balclutha, before leaving for a new position in Dunedin.

The 41-year-old police officer moved to the South Otago town when he was 11 years old and has spent his entire law enforcement career - 17 years - policing it.

He has been promoted and will be one of six senior sergeants on the third floor of the District Command Centre, working as a Southern district deployment co-ordinator.

The decision to leave duty in his hometown was not one he took lightly, Sgt Dinnissen said.

''I've spent a huge amount of sleepless nights over it, and lots of discussions at home,'' he said.

In his previous position at the Balclutha station, he had responsibilities over a variety of areas.

Working in Dunedin would narrow his scope, while providing him with a much broader overview of policing.

In 2002, he joined the combined investigation unit and in 2010 became a qualified detective.

Yesterday, he spent his last day as the officer in charge for the entire South Otago region.

He would begin four days of induction on Tuesday and his first day on duty would be November 28, he said.

He had traded ''screeds and screeds of paperwork'' for ''six computers and a wall of TV screens'', he said.

He would work as an Acting Senior Sergeant until a course next year would affirm a new rank, trading the three sergeant's stripes he wears on his shoulders for a crown.

The father of four said he planned to commute for at least the first six months. He said, too, if he did decide to move on he would always have ties to the area.

''I've got friends and hobbies and interests based down here: fishing, football, my parents, close friends, all that sort of stuff.

He said he enjoyed the teamwork in Balclutha and the times he would ''get stuck in with the family'' of victims.

''You can deal with some of the worst hours and circumstances imaginable, but you come out with the feeling you've done some good,'' he said.

He said he had become ''very familiar'' with his role in Balclutha and was keen to broaden his horizons and seek new challenges.