Athlete a global role model with a vision 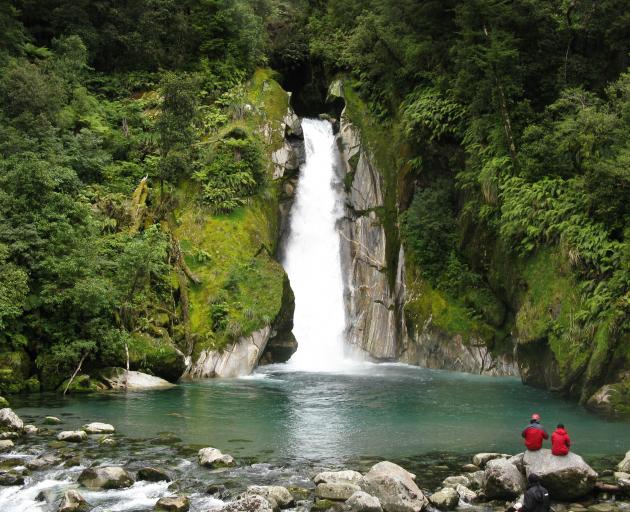 Giant Gate Falls, Milford Track. Photo: DOC
American athlete Dan Berlin has conquered Mt Kilimanjaro  and the Great Wall of China, and broken world records in the Grand Canyon — yet he’s never seen any of the famous locations with his own eyes. The blind endurance athlete believes perceived limitations can be overcome and next month he’ll take on two of New Zealand’s Great Walks to prove it.  Sharon Reece reports.

Attempting to complete Fiordland’s Milford Track in one day is a notable challenge in itself  — completing it in 12 hours without the ability to see seems almost implausible. That, however, is exactly what American athlete Dan Berlin will attempt next month.  Berlin, who progressively lost his eyesight because of a degenerative condition called rod dystrophy,  is now completely blind — but a lack of sight has not stopped him from breaking records the world over.

Team See Possibilities, a group made up of  Berlin and his three guides Alison Qualter Berna, Brad Graff and Charles Scott, travel the world taking on "epic endurance challenges" to raise money for, and awareness of, "overcoming perceived limitations",  Qualter Berna said.

Seven Continents in Seven Years has allowed the team to take on challenges at iconic locations around the world, including Machu Picchu, Mount Kilimanjaro and the Grand Canyon, where  Berlin became the first blind athlete to complete the 74km Rim to Rim to Rim in one day.

Endurance champions Alison Qualter Berna, Charles Scott, Dan Berlin and Brad Graff visit school pupils after their climb up Mount Kilimanjaro in November 2016. Photo: Supplied
The team has chosen New Zealand for its Oceania continental challenge and hope to break some records in the process. Berlin would attempt to become the first blind athlete to run two trail ultra-marathons in the North and South Islands  within a week,  Qualter Berna said.

When the foursome arrive in the country next month, they will first attempt to take on the Tongariro Northern Circuit in less than 12 hours. The Department of Conservation (Doc) describes the 43km track as "rugged and exposed alpine terrain" with the highest altitude sitting at 1886m.

Just four days later, they will travel to Fiordland where they hope to make their way to the start of the Milford Track via an 11km kayak before running the 54km track in less than 12 hours.

Doc described the Milford Track as the "finest walk in the world" with "complex avalanche terrain" and suggested taking four days to complete the hike.

With the unique terrain of every continent presenting different challenges for the team members, they must remain flexible in how they guided  Berlin,  Qualter Berna said.

Team See Possibilities take on the 100km epic endurance challenge on the Great Wall of China in November 2017. Photo: Supplied
"We’ve used different guiding techniques for each challenge and they have been decided on the spot.

"We also have to maintain our energy to last through hours and hours of challenging courses, while also staying positive that we can achieve our goal."

And positivity is exactly what drives  Berlin and his guides to complete such extraordinary tasks.

When he completely lost his sight,  Berlin fell into "a bit of depression" but he didn’t stay there long,  Qualter Berna said.

"The words that come to my mind when I think of Dan are gentle, resilient and kind.

"[After losing his eyesight] he decided to become a runner and find purpose in his life and be a role model for his kids."

Pass shelter, Milford Track. Photo: Keri Antoniak
After a "few marathons" and a half ironman, the team decided to take on the challenge at the Grand Canyon, she said.

"Dan completed this in one day, made history and quickly became a role model inviting people to focus on what they can do rather than what they can’t."

During their New Zealand journey, they will direct their financial support and energy towards the TSP Global Scholarship Programme, which will offer five scholarships of up to $5000 each to blind and vision-impaired students in New Zealand and the United States in 2019.

"The end goal is to facilitate a meaningful education and career path for those that have the will and determination to take on the challenge."

Following the completion of the challenges, the team will travel to Dunedin to meet  children at the Blind and Low Vision Education Network NZ (Blennz) where members hope to "inspire" both blind and sighted children with  Berlin’s accomplishments.