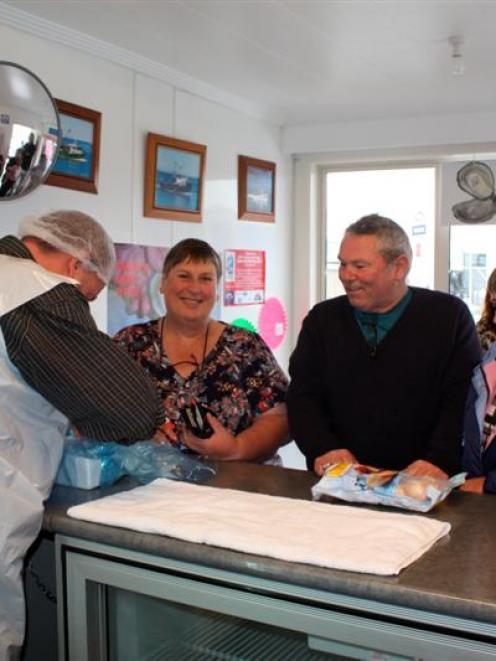 ''Bloody Norah, that's good!'' he said, after wolfing down three in quick succession in Invercargill yesterday on the first day of the 2013 season.

Mr King and his wife Jackie, holidaying from Essex, were visiting Bluff earlier this week when they were told they should not miss the southern delicacy.

They had planned to head north on Wednesday but delayed their departure.

At lunchtime yesterday they joined about 20 others so they could be among the first in the doors when Barnes Oysters opened its shop at 1.15pm.

Used to smaller Mersey oysters, Mr King was impressed by the size of the Bluff beauties - and their taste.

''Absolutely gorgeous,'' he declared as he finished his snack and resealed the pottle so he would have some left for later.

Joan Black drove from Gore to get oysters for herself and friends.

The opening day trip was now a tradition, she said.

There are about a dozen boats in the Bluff oyster fleet.

Barnes Oysters manager Graeme Wright, who is also spokesman for the Bluff Oyster Management Company, said indications were the harvest was going to be good.

This year's quota is 11.5 million oysters, the same number as last season and up about two million on 2011.

Yesterday was a ''mad day as usual'' at the Barnes shop, he said, with first-grade oysters selling quickly at $23 a dozen.

For those wanting to sample their oysters as close to their Foveaux Strait source as possible, this year's Bluff Oyster and Food Festival will be held on Saturday, May 25.