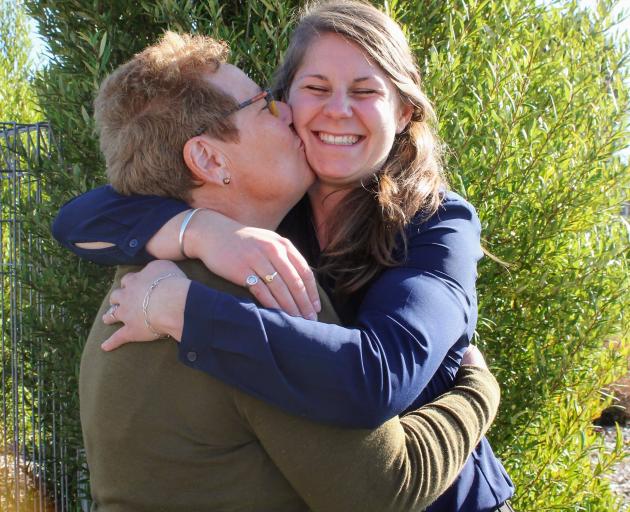 Sue Morrison-Bailey (left) and her daughter, Alex, are celebrating Mrs Morrison-Bailey’s victory over breast cancer by hosting a Pink Ribbon Breakfast fundraiser at the ILT Stadium this weekend. PHOTO: LUISA GIRAO
A life-changing  event can either lead to a life filled with negativity or positivity.

Southland woman Sue Morrison-Bailey decided, when she was diagnosed with breast cancer in February last year that she was going to face it as a fighter, not a victim.

Her strategy worked, as now she could say she was free of the "big C".

"Cancer is always the big risk out there but when it impacts you it is like, Wow! It is a shock.

"But for me, I saw it as something to learn from. It was long drawn-out year, but when you come out the other side, you feel recharged, renewed, reinvigorated and ready for the next part of life."

Mrs Morrison-Bailey had a mastectomy during lockdown, then underwent six rounds of chemotherapy and three weeks of radiation treatment.

"I told my doctor, ‘I never want to see you again.’

"I’m at the stage now where I’m waiting for breast reconstruction and my surgeon’s promised me a tummy tuck, so I’m looking forward to that," she joked.

Mrs Morrison-Bailey found out about the cancer on Valentine’s Day.

The next day, her mother died. However, she managed to keep the news about the cancer to herself for about two weeks.

She did not want to worry her family, especially her only child, Alex Morrison-Bailey (26).

Mrs Morrison-Bailey kept the positivity going during the whole process.

"That fear and dread, it is something you have to go through in order to have a fighting chance."

"I’m very much into my wine so every chemo cycle, I had a different style of wine. So I’ve told the staff — it is chardonnay week and I’m looking forward."

Her daughter said Mrs Morrison-Baileywas an example of what a positive mindset could do.

"The initial reaction was pretty much shock because you hear the cancer word, you automatically get scared. But Mum definitely makes it not scary. "

She remembered her mother giving names of cocktails to the various medications she was taking.

"She was always like that. It helped take the scariness away."

Breast cancer being a cause so close to her heart, the events manager for ILT Stadium decided to pitch to her bosses the idea of hosting a Pink Ribbon Breakfast fundraiser last year.

They agreed and this Sunday, the ILT Stadium team will host the second edition of the Pink Ribbon Breakfast "boobie brunch" fundraiser.

"Breast cancer sits very close to home within our stadium family as many of us have been closely affected. We’re passionate about raising awareness and uniting together to raise funds for this incredible charity."