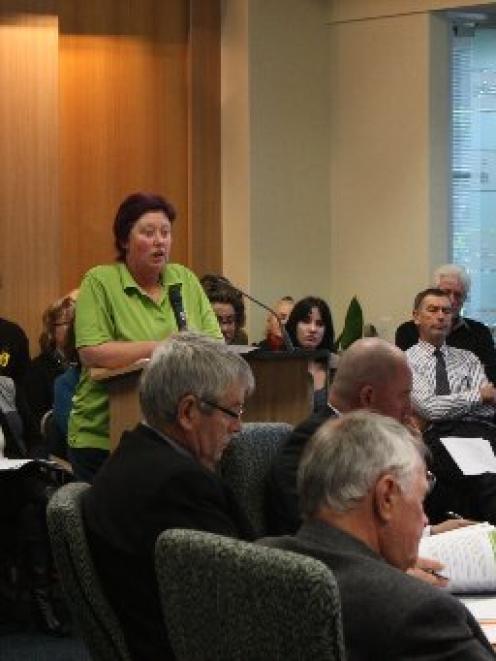 Invercargill resident Carol Jasperse speaks about the CBD revitalisation plan at an Invercargill City Council meeting on Tuesday evening. The councillors at the table are (clockwise from foreground) Graham Sycamore, Lindsay Abbott, deputy mayor Darren Ludlow and Graham Lewis. Photo by Allison Rudd.
Invercargill city councillors adopted an ambitious and expensive CBD revitalisation master plan this week, but not without impassioned views from both sides of the debate and members of the public.

The plan, the culmination of two and a-half years' work, will see a major overhaul of the Dee, Tay and Esk Sts area with two ''family-friendly anchor'' spaces, pocket parks and pedestrian shelters.

Later would come a revamp of the Wachner Pl plaza and the creation of a park on the southern edge of the CBD linking to the Otepuni gardens.

The plan was adopted eight votes to five after nearly four hours of public forums and council debate.

The cost, the future of earthquake-prone heritage buildings in the CBD, whether the revamp would draw people back to the CBD, and whether the plan was well-enough understood by the public were all canvassed.

The proposal to reduce Dee and Tay Sts to one lane each way within the CBD provoked much comment.

Council roading manager Russell Pearson said both streets were state highways administered by the New Zealand Transport Agency and the NZTA would need to trial the change successfully before any permanent changes were made.

The council had budgeted $6.6 million for the upgrade, most of which was to come from a rate on CBD property owners, but the new cost estimate is $12.19 million, plus up to another $1.3 million if the council goes ahead with buying three Esk St car parks it leases.

Several councillors said they supported the plan but wanted the council to delay adopting it until ratepayers had been consulted about cost increases.

However, Inner City Working Party chairman Cr Norman Elder said the council did not know exactly how much the work would cost and would not know that until specific projects were tendered.

The council would be able to decide each year through its annual plan how much should be spent on the plan, which had been staged to be completed over five years.

Plan designer Craig Pocock said in many towns and cities he had worked in, the development economics of strengthening buildings did not stack up. That meant heritage buildings were demolished, leaving ''gappy-toothed'' streets.

''Provincial New Zealand is under a massive amount of pressure. We have to give owners the confidence to strengthen or rebuild and I think this plan does that. The plan is about vitality.''