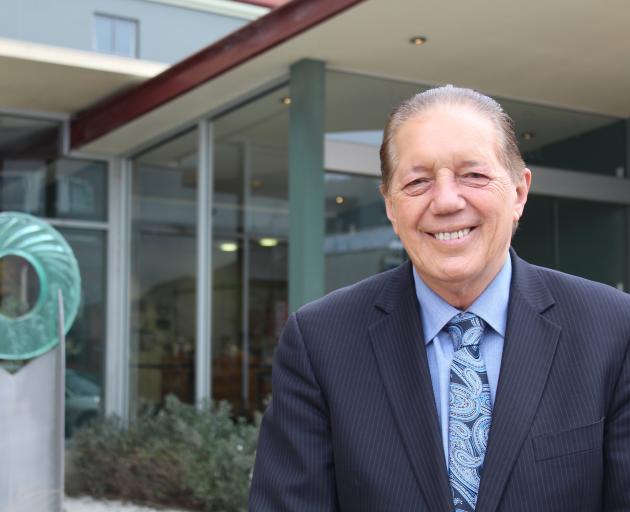 Sir Tim Shadbolt. PHOTO: ODT FILES
An email sent by Invercargill Mayor Sir Tim Shadbolt was accessed by the council’s chief executive and used against him at a behind-closed-doors meeting.

The revelation is the latest unfolding from last Tuesday’s southern political melee, in which councillors challenged the embattled mayor about a private statement to the media an hour before.

Councillor Alex Crackett confirmed the contents of the email were raised by chief executive Clare Hadley at the chairmen’s meeting last week, which Sir Tim afterwards called a "let’s attack the mayor fest".

Ms Hadley responded to questions about what unfolded by confirming the email accounts of the mayor and executive staff at the council all had "more than one support officer with access".

She did not comment further on how she accessed the contents of the email hours before the story including the comments was published.

The emailed statement, which the mayor’s partner said was only sent to one external recipient, labelled the council a "regime" and accused staff of sifting through his personal documents.

Now Sir Tim is concerned staff are looking through his emails too.

"You feel as if you’ve been set up in a way. Yes I’m concerned about my privacy, I feel like it’s been violated," Sir Tim said.

"I’m definitely upset if people are going through my emails and not telling me."

The saga began at 12.55pm last Tuesday when an attributed response from the mayor was emailed by his partner, Asha Dutt.

The message was sent from his work address, but the council is aware of the working relationship between the mayor and Ms Dutt.

Five minutes after the message was sent, the mayor entered a closed chairmen’s meeting held at council, where a late item was brought up about 2pm.

At the time, the mayor incorrectly assumed his comments had already gone live in an article. But the story was not actually published until after 6pm. On Friday, Sir Tim and his partner realised there could be a leak.

Deputy mayor Nobby Clark, who challenged the mayor at the meeting, remained tight-lipped about the situation.

"It came to our attention he made comments to you [Local Democracy Reporting] that were about to be published. So we asked for some explanation to that," Mr Clark said.

"It doesn’t really matter who raised it."

Independent observer Jeff Grant was also hesitant to comment, but suggested the message had been leaked.

"Somebody must have given it [the email] to somebody, I assume," Mr Clark said.

On Wednesday, Sir Tim described the closed meeting as a "let’s attack the mayor fest", and said those present took turns to destabilise him.

He said the late item was introduced without prior warning.

On Thursday afternoon, he sent an email to media outlets doubling down on the bullying claims, saying he was disappointed he had not received any contact from elected members or the chief executive about his welfare.

"I feel there is a strategic effort behind closed doors to break me, to which I won’t give in."

Within an hour, an internal group email was sent out by the chief executive with counselling information. The mayor also received a formal letter from a staff member saying the council took bullying seriously.

Independent observer Lindsay McKenzie would not confirm who raised the item, but said it was raised late about 2pm.

An overwhelming majority of people believe Sir Tim Shadbolt should resign as Invercargill mayor, according to an informal poll conducted by the Otago Daily Times. The poll, which ran from last Friday to Sunday, asked readers if it was time for the mayor to resign. Of the 157 respondents, 82% said it was.
matthew.rosenberg@odt.co.nz
7 Comments

Do they want the current Council?

Sure Tobe, why wouldn't we?

I am shocked that the invercargill council are more concerned with there petty in fighting than doing any work for there district.

Agreed. What **productive** work are they doing for their community-funded income?? All of their energy seems to be on point-scoring and in-wars for the media. Shameful shambles of non-productivity.

Having a mayor literally asleep at the wheel is not petty infighting.

A LOT of bullying and petty political maneuvering in the press. Very petty and unprofessional.
As has been said: Local politicians are very high on ego and ambition. But local politicians often have low ability or talent. Dangerous mix. Optics are a TRAIN WRECK council full of petty personal ambition and rivalry, written large as leaks, bullying, ageism, and backstabbing in the media. For goodness sake. Like little kids, bullying and telling tales, with too much access to the media.