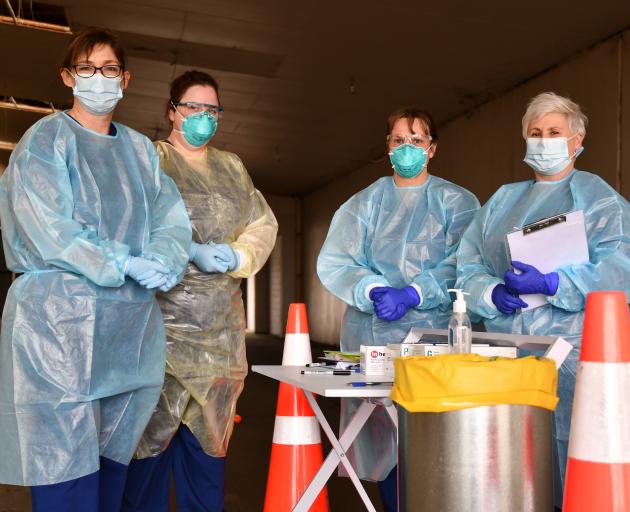 A new testing centre has been established in Invercargill, and rest-homes across the country have gone into lockdown.

Yesterday, director-general of health Ashley Bloomfield announced there were four more probable Covid-19 cases - all linked to the community-based cases - as well as one additional case in managed isolation.

Two of the new probable cases were also family of the first case, and two were co-workers of the family, he said. All were showing symptoms.

Health officials were still unsure if the cases of community transmission were linked to staff working at the borders or at managed isolation facilities.

The Government’s response has been praised by University of Otago department of public health Prof Michael Baker, who said it responded "very vigourously, very rapidly".

But the country had to prepare for all possible scenarios, he said.

"Given the timing, incubation period and so on, the virus could have been circulating for a couple of weeks. The extent of that outbreak is the key unknown at the moment," he said.

"We are a mobile population and it’s possible that the virus has been in other parts of New Zealand. Hopefully it’s not, but a regional lockdown only really works when the virus is confined to that population."

At noon yesterday, Auckland moved into Level 3, and the rest of New Zealand went into Level 2.

The restrictions will remain in place until midnight tomorrow.

Prof Baker said there had been some complacency about the virus in New Zealand, but the outbreak in Victoria, Australia, had been sobering.

There was cause for some optimism, as there were "more tools" available to tackle the virus than during the first outbreak earlier in the year.

"They’re all really useful tools that we didn’t have."

WellSouth chief executive Andrew Swanson-Dobbs said there had been a significant rise in demand in the South.

"It is exactly what has been requested, but we need to ensure it is people who are symptomatic or who have been close contacts."

At this stage, community-based assessment centres were not being re-established in the district, but they were prepared to do so if required.

Visiting hours for Southern District Health Board hospital remain unchanged in Level 2, but people were asked not to visit patients if they were unwell.

Patients who presented with respiratory illness, but were unlikely to have Covid-19, will also be tested as part of ongoing surveillance testing.