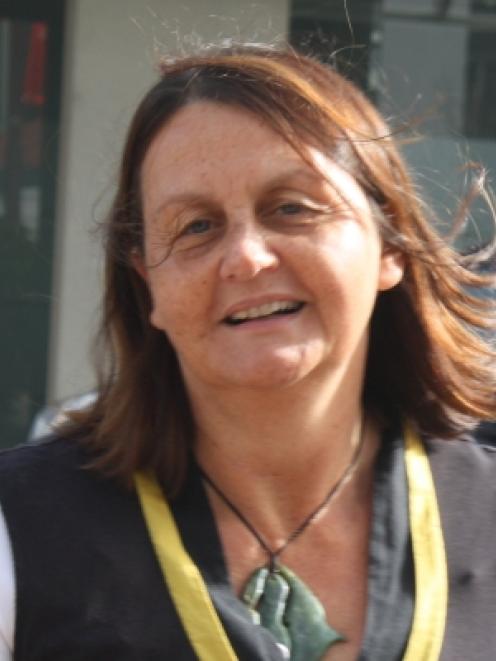 Gloria Davis.
A woman who lost four family members when Easy Rider sank in Foveaux Strait two years ago is distressed by a guilty verdict handed down yesterday against the widow of the skipper.

A district court judge found Gloria Davis, the sole director of the company that owned the fishing boat, partly responsible for the capsizing that cost eight lives.

Rena Fowler had not heard about the court decision until contacted by the Otago Daily Times.

''That sinking had a natural cause. It was one of those things that happen.

''Foveaux Strait is an iffy strait.''

Mrs Fowler said yesterday it was not fair Davis had been charged.

Davis, the sole director of AZ1 Enterprises, had denied 10 charges laid by Maritime New Zealand. A 10-day defended hearing was held in Invercargill in January.

In a reserved decision released yesterday, Judge John Strettell found Davis and her company guilty on three charges. Seven others were withdrawn or dismissed.

No date has been set for sentencing.

Davis was reported in Stuff yesterday, questioning the court ruling.

She said it was difficult to understand how the district court and the Transport Accident Investigation Commission had arrived at different outcomes.

''I respect both organisations but right now I am struggling to see how two respected organisations can arrive at different results, and how people like myself and thousands of others who use their commercial boats daily for recreational use can comply with the law,'' Davis said.

''I can only wonder at what effect the existing confusion with the rules between MNZ and Safe Ship Management companies as to recreational use of commercial vessels will now have on the boat owners and operators throughout the country, who may all be affected by this decision.''

The trial heard Mr Karetai took passengers on Easy Rider when he was not permitted to do so; overloaded his boat; stored too much equipment on the deck; did not carry enough life jackets; and left port at night when the weather forecast was for gale-force winds and rough seas.

He did not hold a skipper's certificate for a commercial vessel and left port on March 14, 2012, while a routine safety inspection of his boat was yet to be completed.

Judge Strettell found Davis as owner, and AZ1, were responsible for the safe operation of the boat, for the safety of those on board, and for ensuring all on board were adequately qualified and trained.

''Having taken on those responsibilities, however regrettable and unfortunate it is, it is not open for either Ms Davis to say, or more properly, others to say, that the only responsibility was that of the skipper and that Ms Davis was no more than an administrator,'' Judge Strettell said.

He said Davis knew Mr Karetai did not have a skipper's certificate, and that he intended to take passengers to the Muttonbird Islands.

These ''shortcomings'' had placed passengers at unacceptable risk.

Davis' defence was Easy Rider was on a personal recreational trip at the time it sank and was not subject to Maritime New Zealand rules for commercial vessels.

Judge Strettell rejected that, saying the evidence was overwhelmingly that the principal purpose of the trip was to fish commercially.

Leon Harrison, a friend of crew member Shane Topi, said that Davis had suffered enough and should not have been charged.

Rewai Karetai ''was his own person'' and Mr Harrison did not believe Davis or anyone else could have told him what to do if he did not want to do it.

''I think she has suffered enough, and I am sure the families of those who died feel exactly the same,'' Mr Harrison said.

Davis conducted her own defence with help from Invercargill lawyers Jodie Harvey and Jeff Walker, a friend of the court. Maritime New Zealand director Keith Manch said the verdicts should send a strong message to operators in the fishing industry.

''The decision to prosecute Ms Davis was not taken lightly, given she has already suffered greatly as a result of the incident.