'End of an era' as tavern destroyed 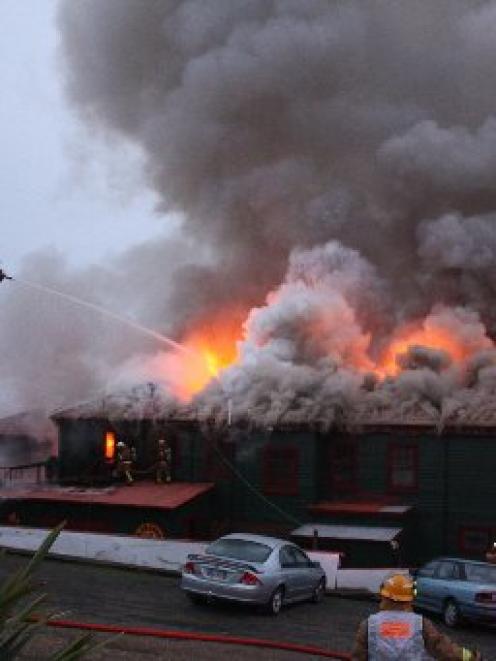 ''Within five minutes of being told to get outside, we could hear the hot-water cylinder overflowing, so she was hot,'' Cazna Gilder said.

''It's the end of an era,'' she said as she and a crowd of Riverton residents watched fire crews try to save the 135-year-old building.

''You wouldn't ... believe it. It's the biggest fire we've seen in Riverton for a long time and, hopefully, the last,'' Mrs Gilder said.

The two-storey tavern, established in 1878, overlooks the Jacobs River Estuary. A huge pall of smoke could be seen across the town, 30km west of Invercargill.

Fire Service assistant area commander Julian Tohiariki said last night he did not think the building could be salvaged.

''The building is still standing, but the roof is burnt through in several places and ... there is a lot of smoke and water damage as well.''

He was full of praise for the firefighters.

''It was a difficult fire to fight, because it [the building] had quite a few false ceilings in there that the fire travelled along, which made it very difficult for the firefighters to get access to.''

The fire was under control by about 8pm, but crews remained at the scene to dampen down hot spots. The Riverton crew was going to stay at the scene overnight to make sure the fire did not reignite, he said.

It was believed the fire started in the kitchen, but the cause was not yet known. Fire safety investigators would inspect the building today. he said.

Robyn Mulligan, who has owned the hotel for about 11 years, and Lindsay McDougall, her bar manager of four years, both lived upstairs.

Mr McDougall said Ms Mulligan was unable to stay at the scene and was being comforted by a friend at a nearby house.

He said he had lost his possessions, but was pleased no-one was injured.

Onlookers said smoke billowed from the building for about half an hour before flames broke through the roof soon after 5pm. About 5.30pm, a firefighter said the upper floor had collapsed inside the building and firefighters were not able to gain access.

Watching from the other side of the road, Loel Kennedy said the hotel was ''gone''.

''She wouldn't be worth saving now.''

Her parents owned the tavern in the 1950s and she lived there, worked there and was married there.

Resident Robbie Wallace said he was also sad to see the hotel ablaze.