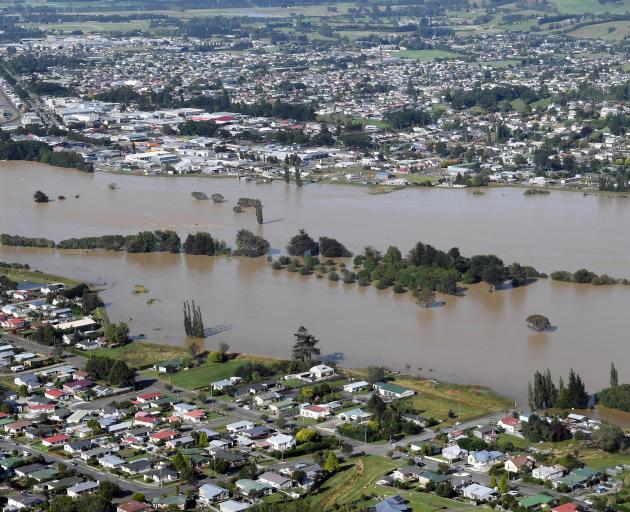 Gore is flooded in February after the Mataura River burst its banks. PHOTO: STEPHEN JAQUIERY
Emergency flood repair costs following recent severe weather in Southland are well on their way to reaching $2million.

A report presented to the Southland District Council services and assets committee yesterday confirmed the snow and flooding in September cost the council $1.75million in road repairs. A total spend of $2million was forecast.

McLean Rd was under design and would be ready for a consent application to be put in next month, with works forecast to start in January 2021.

Repairs to Ellis Rd had been put on hold while Environment Southland carried out flood protection work on the flood bank, Mr Hayes said.

"We’ve been in regular contact with them [ES] on a weekly basis and they’re programming that work for before Christmas."

The council received 165 requests for service in September, mainly in response to the flooding and snow at the end of the month — an increase of 35% compared with the number recorded in the same month last year.

Chairman Ebel Kremer asked whether any major risks had been identified and if staff were "reasonably comfortable" repairs were on track.

Staff confirmed there were none which had not been discussed previously.

The council’s road maintenance spend across its three contracts, which include Waimea Alliance, Central Alliance and Foveaux Alliance, totalled $3.74million from July 1 to the end of September.