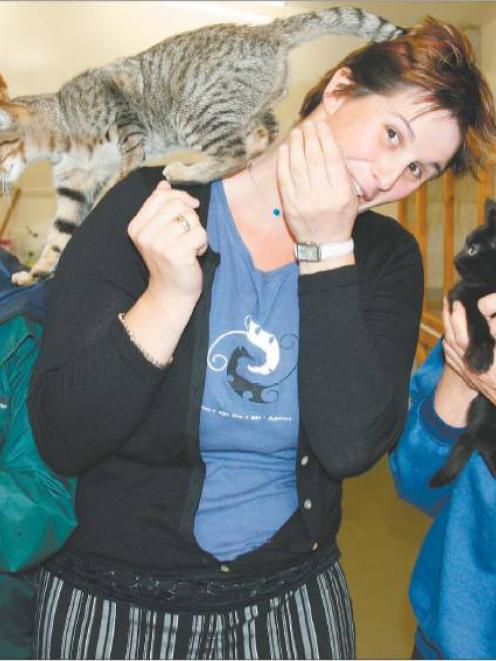 Emotional time: Gore SPCA Shelter volunteers (from left) Debbie Lawson, Andrea McMillan and Averley Jackson are saddened so many cats may have to be put down if the shelter is forced to close.
The Gore SPCA Shelter will be one step closer to closure when volunteer manager Kathy Ashbridge retires on June 1.

Mrs Ashbridge, who has been volunteering at the shelter for four years, said she had ‘‘run out of puff''.

‘‘The last two years have been a struggle,'' Mrs Ashbridge said.

‘‘To administer the shelter, do a good share of cleaning, dealing with complaints and being on call 24 hours a day has taken its toll.

‘‘That, along with two kitten seasons a year and a large increase in abandoned animals was also a contributor to my resignation.

‘‘Although it has been a necessary source of much needed-funds, the cattery increased the workload.

‘‘I want to thank the generous and caring people who have played their part in keeping the shelter operating for the last four years.''

She and her husband Peter had often worked more than 60 hours a week and have been part of a team that has significantly upgraded the shelter, built a cattery and landscaped the grounds. The couple won a Civic Award last year for their dedication to the shelter and its feline occupants.

Gore SPCA member Andrea McMillan said although the shelter had enough money to maintain the day-to-day expenses, they had no funding to pay a shelter manager.

She said finding another manager prepared to take on the task on a voluntary basis was unlikely although she would be happy to carry on in a fundraising capacity.

‘‘It's a reflection of society,'' Ms McMillan said.

‘‘People are committed and busy these days.'' She said if they did not find another manager, the shelter would ‘‘cease to exist''. She said a manager would have to be robust and assertive, have leadership skills and be flexible.

‘‘From a national perspective, we will try and negotiate with local helpers and maybe turn the shelter into a satellite shelter for either Dunedin or Invercargill but we would still need a [local] manager.

‘‘The alternative is that it will close and people would have to take unwanted cats to Invercargill.''

He said towns such as Balclutha and Milton had no shelter and people had made the journey to Dunedin to drop off a cat. ‘‘I am surprised the shelter has lasted this long and it's all because of a dedicated group of people,'' Mr Soper said.

‘‘It's a lovely shelter but we can't continue without a manager.