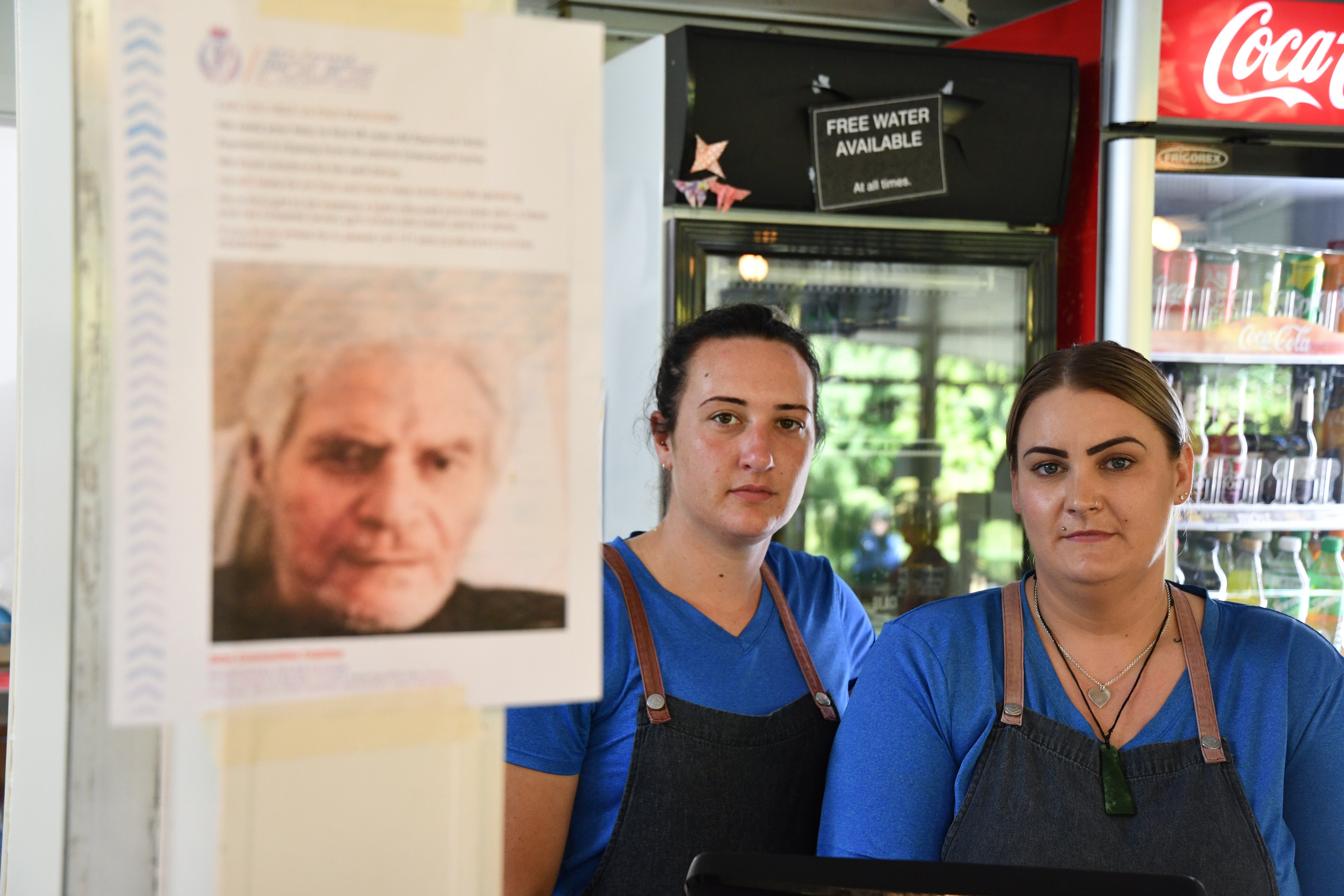 Cheeky Llama Cafe staff Toni Gorton (left) and Gemma Le Vaillant say most people are aware missing man Raymond Horn (68) was last seen in Queens Park, Invercargill. PHOTO: LAURA SMITH
Civilian volunteers are refusing to give up hope despite it being two and a-half weeks since Raymond Horn disappeared from an Invercargill rest-home.

Mr Horn (68), who has dementia, walks with a limp and is non-verbal, went missing from Walmsley House, Richmond on Monday, February 15.

Teams of LandSAR volunteers and police had been searching for him since, but to no avail.

However, it was not just the professionals on a mission.

Founder Sue Hodson created it in response to the surge of concern from people who wanted to do more than just "sit at home and stress".

During the first week of their search, about 150 volunteers rallied together - twice a day and at times, through wind and rain - to search Queens Park and its surrounds.

In recent times, the meetings had stopped but people were still coming forward to help with dropping flyers in peoples’ mailboxes and delivering balloons to those who wanted to tie them to their fence in solidarity.

"It’s becoming a real push to keep it in peoples’ minds but we’ve distributed about 6000 flyers so far.

"Our focus at the moment is on the whole of Invercargill because Mr Horn could literally be anywhere."

She was concerned about the fact there had been no national coverage of his disappearance and believed it would assist in the search for him.

"It was the weekend after [the] Burt Munro [challenge]. Maybe he’s been picked up and the person doesn’t know people are looking for him.

"Maybe someone does know where he is and that’s the missing piece of the puzzle."

Despite police saying it was unlikely Mr Horn was still alive, the group had "refocused" and remained committed to finding him.

"We’ve renewed our sense of purpose as a group."

Nearly two weeks ago, police released CCTV footage which showed Mr Horn on the corner of Yarrow and Mary Sts about 9.30am, just after he left Walmsley House, and then walking along Yarrow St towards Queens Dr.

The last confirmed sighting of him was captured at 2.10pm, the same day, near the children’s playground in Queens Park.

Senior Constable David Loader yesterday said two people captured in CCTV footage were deemed as people of interest but they had not yet been identified.

"It is believed the two people sought by police may have seen Mr Horn."