About 400 people turned up to the meeting hosted by Groundswell New Zealand to protest against the Three Waters reforms.

It was the third meeting of four hosted by the group in Otago and Southland.

A Taxpayers Union board member, Mr Williams was the keynote speaker at the meeting.

If the reforms went through, iwi would have six out of 12 members on the entities appointed to run the Three Waters provision, he said.

"That does not seem democratic to me.

"Water is something that everybody in New Zealand uses and needs and why Maori should have special access or special privileges around the use of water, I just don’t get.

"It’s very obvious iwi interests will be at the forefront of any decisions made," he said.

That would mean iwi would "control the water assets of this nation".

"Water is for everyone — it cannot possibly be claimed as a taonga."

According to English common law, which had been established in New Zealand for more than 180 years, water was a public good, he said.

"That some people might have rights of ownership of water is just patently ridiculous because fresh flowing water is a public good."

Since the freshwater reforms were proposed in 2019 there had been "an avalanche of Government stupidity", Mr Paterson said.

"Three Waters is just a classic example of that."

He learned how bullies operated when he was at school, he said.

"We have a Government that wants to bully rural New Zealand even though it has been the only sector that has kept the economy going for the past two years.

"Central government does not steal the assets of local government just because they are the big kids in the playground. 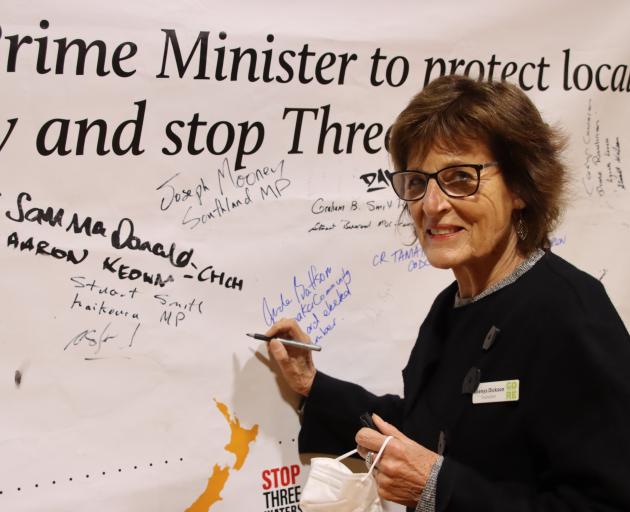 Cr Byars said he was disappointed how councils from Oamaru down had accepted the Government’s reforms.

There was a breakaway group of councils who disagreed with the reforms, he said.

"To my mind we should be doing the same thing."

Mr Hicks said it was not a case of stopping the reforms because that would not fix the problem of out-of-date stormwater, wastewater and tap water infrastructure many councils had.

"We have to address it as a nation.

"It’s been underinvested [in] for decades and we’ve got examples in our town where our infrastructure is falling apart."

The crowd, which had been orderly just before this point, started to call out.

The work the council was undertaking in Elizabeth St was an example of work that needed to be done throughout the town, Mr Hicks said.

"Elizabeth St alone is going to cost $4 million for our ratepayers."

District-wide, the council would need to spend $330 million to upgrade the infrastructure.

His council believed a partnership between central and local government similar to the Waka Kotahi New Zealand Transport Agency one would be a good solution.

The officials were also invited to sign a community leaders’ appeal calling on Prime Minister Jacinda Ardern to stop the reforms.

Refreshing Local Democracy spokesman Chris Romero told the crowd he was excited by the large turnout.

"It’s a sign to us that the people in this area are awake and are not particularly happy with the things this Government is doing and we are prepared to do something about it to make a positive change in our communities."

Those elected to government were supposed to listen to those who elected them, he said.