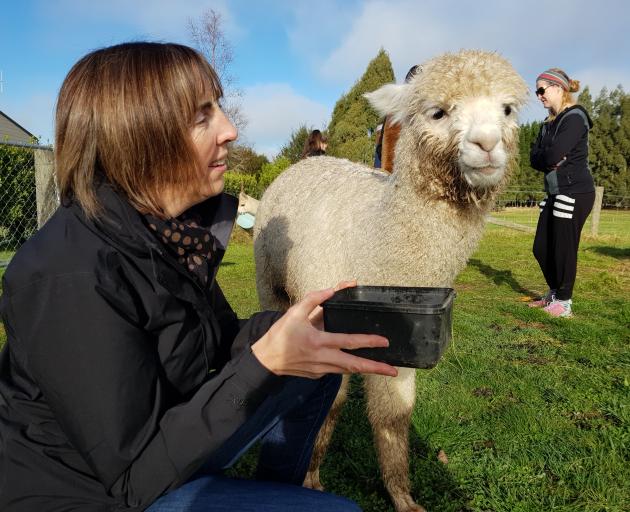 Invercargill woman Helen McEwen feeds Burns, the alpaca, at Kepler Mountain View Alpacas in Te Anau yesterday. PHOTO: SUPPLIED
Adventure-seekers  flocked to Te Anau over the long weekend for a chance to "shake off the cobwebs".

For the first three-day weekend since lockdown, Fiordland tourism operators encouraged locals and domestic travellers to make the most of their own backyard at a discounted rate.

"We want to show people that Te Anau is still alive and kicking but also get people to shake off the cobwebs from lockdown and just get back out in nature."

At the discounted rate of $15 per adult and free admission for children, the Kepler water taxi transported "well over 100 people" across Lake Te Anau to Brod Bay on the Kepler track.

From there, visitors could choose between hiking to Luxmore Hut or taking a flatter track around the bay.

"It’s about livening the place up again. Town’s been quite busy actually. I was really surprised by that; it’s been great."

Plenty of locals had taken up the offer to "make the most of the sunshine", as well as travellers from across the Southern District, she said.

"It’s really good to get a positive vibe going and just welcome New Zealanders to Fiordland."

"There were definitely more people than we normally get on Queen’s Birthday weekend," Mrs Haansen said.

Children were invited to visit one of the three alpaca tours available on the farm for free.

While the farm had been open since Level 2, business had started to pick up over the past few days.

"A lot of people don’t have the opportunity to come see alpacas and they’re right here in our backyard."