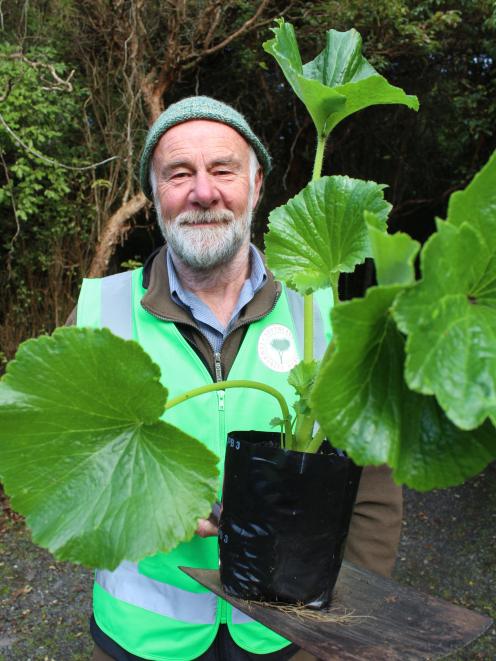 Southland Community Nursery volunteer Ray Jackson, of Otatara, holds one of the punui which was planted on Motupohue (Bluff Hill) on Saturday. PHOTO: JENET GELLATLY
The megaherb punui has returned to Bluff.

In a joint project between the Bluff Hill Motupohue Environment Trust (BHMET), Awarua Runanga, the Department of Conservation and Southland Community Nursery, 50 plants which could grow to 2m, were planted among the titi and seabird colonies at the entrance to the Glory Track and on the Foveaux Walkway, as well as near the gun pit on Motupohue.

Used by Maori as a food source, punui which still grows on many of the Titi Islands and Stewart Island, used to grow along the southern coast of Foveaux Strait and Fiordland, Brain Rance, of Southland Community Nursery said.

"It is a special true Southland Murihiku plant... and is only found down here [in the southern part of New Zealand]."

BHMET chairwoman Estelle Leask said the seeds had been given by Tane Davis and his family from their tupuna whenua (ancestral lands) in Foveaux Strait, and had been grown at the Southland Community Nursery in Otatara.

She described returning the toanga to the mainland as historic.

Captain James Cook also used the megaherb, described as tasting like cabbage, to help prevent scurvy among his crew.

Mrs Leask said the leaves were also used to wrap kai, and the stalks, which were hollow, were used to inflate bull kelp when making titi bags.

Mrs Leask said it was hoped the plants would flourish and become self-seeding via birds.