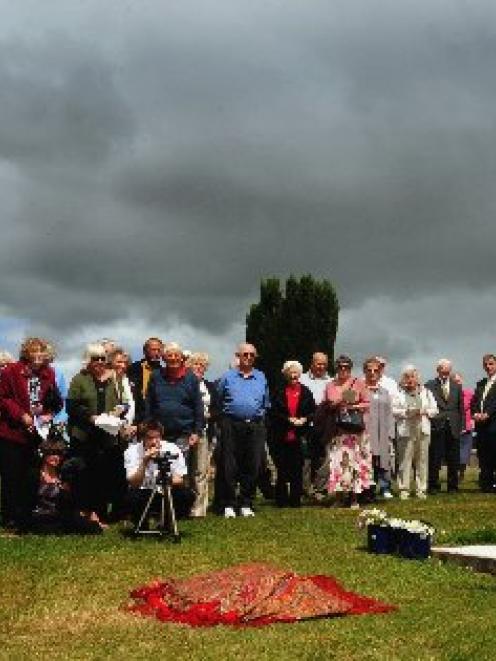 A descendent of Minnie Dean, Paula Wells, reads some words on behalf of the family at the unveiling of the headstone marking the grave of Minnie and Charles Dean at the old Winton cemetery, Winton, Southland. Photo by Craig Baxter.
It was hoped a memorial unveiled to Winton's most infamous resident yesterday would bring her and all those whose lives she touched some peace, reconciliation and healing, a crowd attending the unveiling heard.

"Now she can finally rest in peace," Paula Wells, a relative of Minnie Dean, said after a headstone marking the graves of Dean, the only woman hanged in New Zealand, and her husband Charles Dean was unveiled at a service at Winton's old cemetery during a sudden downpour.

Some of the 100-strong crowd then laid white flowers, believed in Victorian times to represent forgiveness, on the headstone, which closes another chapter in the enduring tale of Minnie Dean.

It was commissioned by Martin McCrae, Dean's great-great-nephew, who lives in Stirling, Scotland. He did not attend the ceremony.

The headstone replaces an unauthorised plaque erected on the grave earlier this month.

Before that, the grave had been unmarked in the 113 years since Dean, popularly known as the Winton babyfarmer, was hanged and buried there after she was found guilty of murdering a baby in her care.

About 100 people including Mrs Wells, who travelled from Timaru, and the granddaughter of Margaret Cameron, the first of about 24 children taken into Dean's care in the late 19th century, attended the service led by Presbyterian minister the Rev Tekura Wilding, of Winton.

Mrs Wells told the gathering the family's intention in unveiling the memorial was to seek peace, reconciliation and healing for Dean, the wider family and all those touched by Dean's life.

"We cannot easily change her reputation in the world. However, we can in our hearts offer her forgiveness . . . and love."

Afterwards, she said the headstone recognised that Dean was a human being too.

"She was a daughter, a sister, a wife, a mother and a grandmother.

Not having a headstone only added to the speculation and fallacies surrounding her."

Mrs Cameron's granddaughter, who did not want to be identified, said her grandmother had told family members Dean was "a nice person" and "not all bad".

It was always her impression that Dean was a well-intentioned woman who was simply overwhelmed by the situation in which she found herself, the granddaughter said.

Dean biographer Dr Lynley Hood said the memorial service concentrated on the themes of reconciliation and joy, elements that were not usually thought about in relation to Minnie Dean.

"This service we had today means she can finally rest in peace and shows that history does not go away.

People will be able to go and find her now, and go and make peace with her."