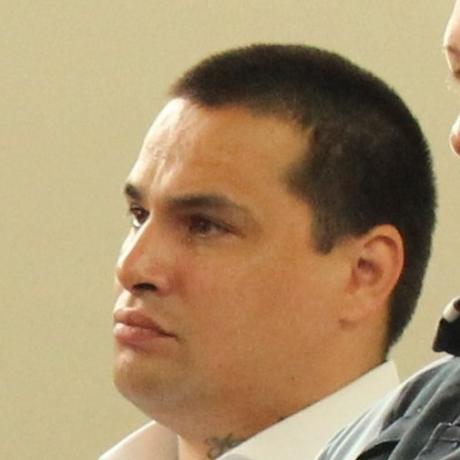 Samuel Samson in court last year. PHOTO: ODT FILES
The man convicted of the brutal murder of an Invercargill woman has had his bid for a reduced sentence tossed out.

The Court of Appeal yesterday dismissed an appeal against the minimum jail term imposed on Samuel Moses Samson (34) last year for murdering Azalia Wilson at the Bavarian Motel in Invercargill in 2019.

After a jury trial in the High Court at Invercargill last year, Samson was sentenced to life imprisonment with a 17-year minimum non-parole jail period.

Ms Wilson, who was 21 years old and the mother of Samson’s baby daughter, died of blunt force injuries to the head, neck, abdomen and face on November 17, 2019.

She applied for a consultant psychiatrist’s report dealing with those issues to be admitted as evidence, and asked for his minimum prison term to be reduced to 13 and a-half years.

Ms Levy said that at the time of his sentencing, Samson’s then counsel, Judith Ablett-Kerr QC, was restrained by his instructions not to put the report before sentencing judge Justice Gerald Nation as it contained partial admissions to the crime.

It led to a propensity for violence in domestic relationships, and addiction to drugs and alcohol.

It was unjust that Samson would have to wait 17 years before he was entitled to return to the community, regardless of the progress he might make, she said.

In their decision yesterday, Justices Gilbert, Mander and Fitzgerald said they would not normally admit evidence on appeal that had been deliberately withheld from a sentencing judge for strategic reasons.

However, they had decided to grant the application "with some reluctance" in the overall interests of justice.

He had experienced "physical, sexual and psychological trauma at the most severe end of the spectrum".

However, there was no evidence of significant intellectual impairment, and the offending was premeditated.

He had gone to the motel intending to brutally murder Ms Wilson, and his subsequent actions were "calculated and extremely callous".

Any discount that might otherwise have been justified would have to be reduced to take account of Samson’s long history of serious and escalating domestic violence.

They found the minimum term of imprisonment was appropriate, and dismissed the appeal.