Owner angered, puzzled by actions of those who set kitten alight 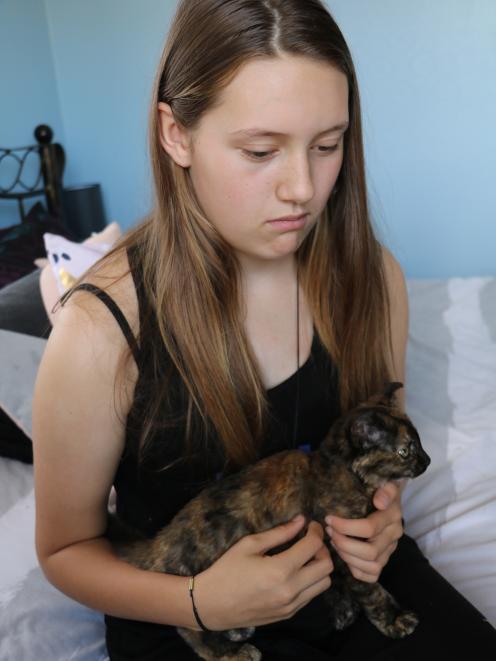 Allyssia Nicol (12) is relieved her sister’s kitten, Hazel, did not come to more harm after it was deliberately set alight by a mystery attacker. Photo: Sandy Eggleston
The owner of a 4-month-old kitten that was deliberately set on fire in Gore on Tuesday is at a loss as to why anyone would be so cruel.

Hazel, the kitten, was found by her owner, Jodie Richards, singed and smelling  of perfume.

Miss Richards said she was puzzled by the actions of those who had hurt Hazel.

"What did they get out of it?

"I don’t know anyone that would do that to an animal — it’s cruel and inhumane," Miss Richards said.

She came home for lunch at 11am and saw Hazel, but did not notice anything different about the kitten. However, when she arrived home after finishing work at 1pm  she saw the kitten in distress, lying in the garage.

"She was meowing and trying to gasp as well," Miss Richards said.

When she picked the kitten up, all she could smell was perfume and singed hair.

She and her partner took Hazel to the vet.

"They were mortified — they were very, very shocked."

Hazel’s long fur and whiskers are gone and she has burns on her ear.

"Her injuries aren’t too bad. She is very lucky that she didn’t get worse."

The kitten was recuperating but had undergone a change in personality.

"She’s very timid — she was a friendly cat."

Previously  Miss Richards’ 18-month-old daughter and Hazel had been inseparable.

"Now [Hazel] won’t have a bar of her. She has no idea why she can’t pick her cat up or give her cuddles."

It was hard letting her older cat, Sam, go outside now.

"I panic that something is going to happen to him."

"Animals have no way of defending themselves so this is horrific [that] this has happened to Hazel."

She urged people to contact police if they had seen anything suspicious in Gore’s Sword St area from 7am to 1pm on Tuesday, no matter how minor the information might seem.

The people who did this, unless treated, is likely to go on to kill humans. Port Arthur killer did the same as a young person. So very sad and cowardly.