Strolling back after a refreshing dip were Riverton locals Pat Kemp and Mayana Allen.
The good-humoured and the brave took to the water in Riverton yesterday for this year’s midwinter swim.

On a day when the air temperature was about 10degC, about 40 men, women and children ran into the cold waters at Taramea Bay, watched by about 100 much warmer spectators.

Before proceedings, Mia Mennel (7) was obviously having second thoughts when asked why she was taking part, given what seemed a briskly chilling prospect.

She went in the water with her sister, Lakisha, mother, Tanya Colyer, and grandmother, Sue Colyer.

After the swim, Lakisha was pleased she had done it although said it was not that warm. 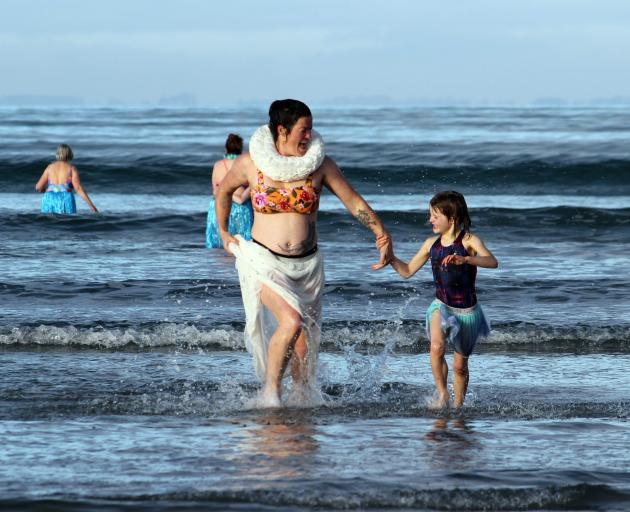 Splashing their way back to drier ground after taking part in the Riverton midwinter swim at Taramea Bay yesterday are Eve Holiday and her daughter, Sigourney (6). PHOTOS: KAREN PASCO

"The best bit was jumping the waves," she said.

For Sue Colyer, the advice of her mother came to mind when she took the plunge yesterday.

"My mother always used to say there’s never a swim she ever regretted. She got to 94."

Judge of proceedings was Southland Mayor Gary Tong — dressed for fun in a gorilla suit.

He counted the swimmers down before they made their way to the sea about 3pm when the tide was low.

However, he decided not to take part saying he did not think the defibrillator in his heart would cope with the cold. 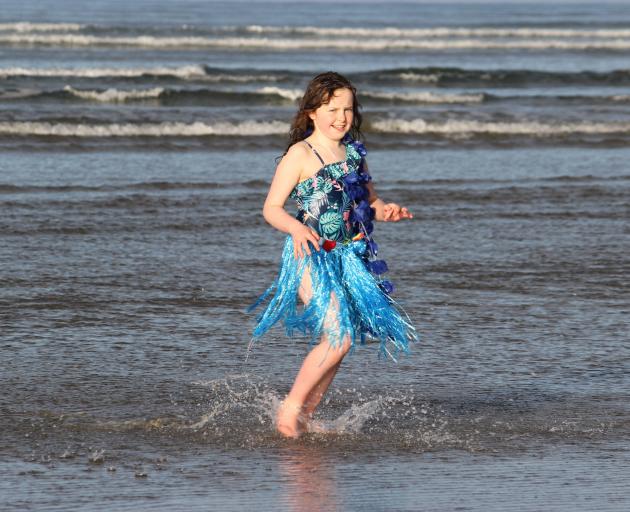 Returning from her swim at Taramea Bay is Lakisha Mennell (9).

As the swimmers emerged the sun came from behind the clouds to help warm them up again.