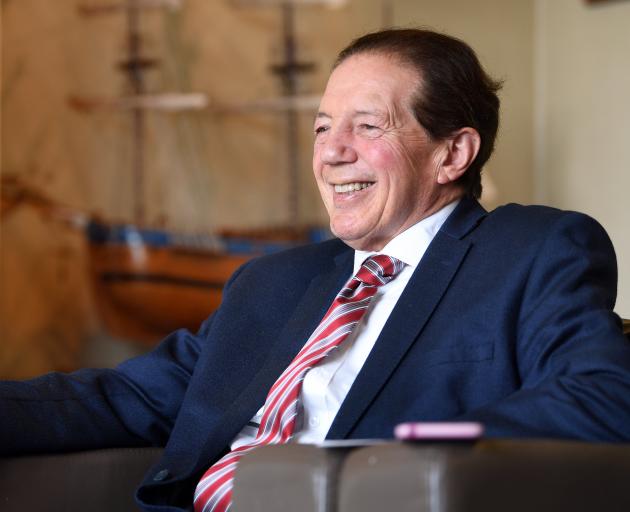 Invercargill Mayor Sir Tim Shadbolt reclines in his office. Photo: ODT files
The suspension of Sir Tim Shadbolt's driver’s licence is just the latest flare-up in a fraught term which has some questioning if he is still up to being Invercargill mayor. In a candid interview with Local Democracy Reporter Matthew Rosenberg, New Zealand's longest-serving mayor addresses speculation about his health and ability to lead, and for the first time touches on the incident that led to his licence being suspended.

"If I can survive this, I can probably do another three or four terms."

Sitting on a plush chair in a room that resembles more of a lounge than a mayoral office, Sir Tim Shadbolt is reflecting on the issues that have thrown him into the headlines.

It’s been a tumultuous term in office for the man who put Invercargill on the map.

The past 12 months have seen the resignation of his deputy, a scathing independent review of his leadership, and most recently, questions about his ability to drive.

Photos of Sir Tim in the passenger seat of his Chrysler 300C last month sparked speculation about the state of his driver’s licence, and it was later revealed it had been suspended.

He remained tight-lipped, but now says it’s nothing "major".

"No-one was hurt. No bumper-to-bumper exchange. No accident of any sort where a person got hurt."

But behind the golden smile, Sir Tim seems acutely aware he’s getting older. He talks about slowing down and says the "golden years" could be over, even though he doesn’t want to admit it.

He didn’t expect to win the latest election and fears his chances of making it back into power aren’t good if his opponents play it smart.

They’re surprising admissions from a man who carried an air of invincibility the moment he set foot in Invercargill.

That was almost 30 years ago, when he hitch-hiked from Auckland to the southern tip of the South Island in hopes he could take out the 1993 by-election.

He won, and minus a 1995 loss to Dave Harrington, has maintained a perfect mayoral record ever since. All up, he’s won a total of 11 mayoralty bids across two locations — Invercargill and Waitematā City. 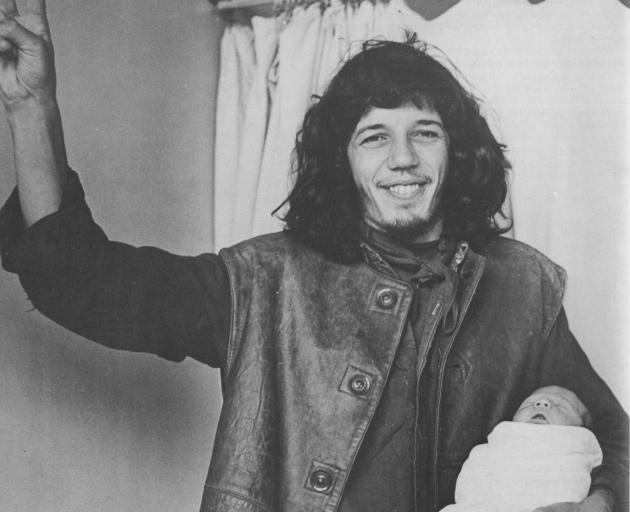 Sir Tim in 1971. Photo: via Herald on Sunday
Over the course of his 74 years, New Zealand’s longest serving mayor has worn many hats. Activist, commune founder, concrete contractor and comedian.

But Sir Tim is being monitored like never before. He thrives on a challenge, but at what cost?

Dysfunction at the Invercargill City Council has forced the hand of the executive team to employ a group of independent observers — a move that could cost ratepayers up to $730,000, depending on how long they’re required.

Late last year, the Department of Internal Affairs was so concerned about the performance of the mayor and councillors that an independent review was launched.

The Thomson Report, named after its author Richard Thomson, highlighted issues with a mayor who seemed "increasingly unable to deliver on the kind of leadership that might unite a struggling council".

Across its 32 pages it detailed a breakdown in communication between Sir Tim and both his deputy and chief executive. It also cited a lack of management and leadership from the mayor, and an increasing need for him to be assisted with basic tasks.

According to the review, Sir Tim felt abandoned by management and stripped of power.

Then came the fateful day of November 23 when he blindsided his councillors at a press conference.

The media front was supposed to be a united effort to address the issues which had been laid out in the report and discussed behind closed doors the previous week.

But Sir Tim had other plans.

With chief executive Clare Hadley to his left and deputy, Councillor Nobby Clark to his right, he said he "refused to take the mantle of convenient scapegoat".

Looks of both surprise and disappointment spread across the faces of city councillors seated behind him. 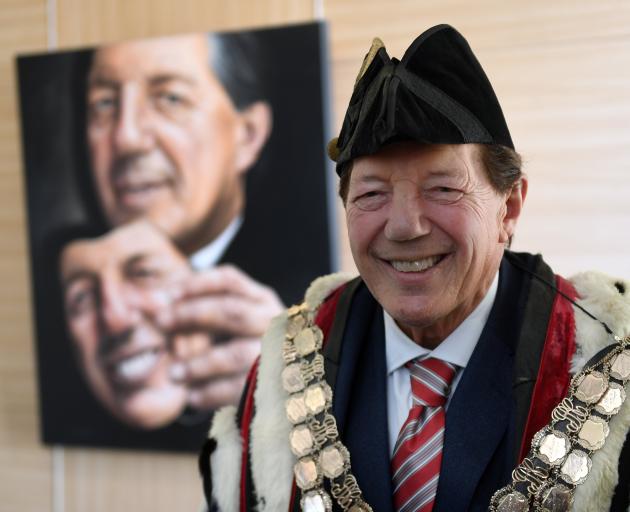 That includes morality, a subject which appears front of mind.

"You get all these Covid-19 reports that anyone over 70 is virtually a gonner, and it does undermine your confidence a bit.

His charisma has won him supporters across the country, and the Invercargill City Council website hails him a "local hero".

But Sir Tim says he’s not enjoying the job like he used to.

Things have remained tense between the mayor and his deputy, and last month Sir Tim labelled him "Brutus" when Cr Clark said he should front up over his driving.

Looking back at last year’s press conference, Sir Tim says he was blindsided too, by a media turnout that was far beyond what he expected.

"Usually there’s only two or three, maybe four [reporters] if it’s a big issue. But it seemed to be a far bigger deal than what I was expecting, so I just kicked for touch.

"I’ll review my stand on this once I’ve been able to do some study on it."

Sir Tim picks and chooses what he talks about but is relaxed and unhurried. Sitting in his Kathmandu puffer jacket, which he describes as uniform for chilly Invercargill, his schedule is clear for now.

He gets up at one point to check what’s ahead for the day and is a bit surprised to see he’s staring down the barrel of another engagement.

"They’ve got a meeting on how to support the mayor! Two o’clock. I’m not sure if the media are invited to those."

Support is a contentious issue in Sir Tim’s world.

An ongoing friction between the mayor and council is IT training — the mayor claiming he’s been rejected the help he needs to get his head around the digital world and council staff saying he’s actually turned down opportunities.

But perhaps one of the harshest criticisms of the Thomson Report was leveled at Sir Tim’s cognitive ability.

"Many interviewees reported a range of obvious concerns including short term memory deficits, confusion, and the need to be closely managed by both council staff and senior councillors in order to chair a council meeting," the report said.

Asked if city councillors had brought up that concern in person, Sir Tim said they hadn’t.

"No, none of them have. I’m sure they would have thought it."

He isn’t afraid to talk about his own health, saying he’s working hard behind the scenes to "clear" himself of conjecture.

"There’s been several visits to the doctor," he says, explaining that he’s keen to disprove the naysayers.

So have the external pressures taken their toll? Yes and no.

Sir Tim says "activist Tim" from the past would tell him he needs a rest, but that doesn’t mean retirement.

He puts a large portion of his success down to campaigning and putting up as many billboards as he can.

Even though he didn’t think he’d do "all that well" last election, he managed to out-muscle his opposition by focusing on the people who weren’t planning on voting for him .

The only thing that would put an end to his run would be losing an election or suffering a health event, he says.

"If I had a stroke or something, I’d re-evaluate the situation.

"I’m definitely slower than when I was in my 40s and 50s. But with wisdom comes old age ... with old age comes wisdom."

He also has some advice for those going up against him, saying councillors should pull a name out of the hat and not split the vote with multiple people.
Statistics would agree.

In the 2019 election, it was the first time in 21 years the combined votes for other candidates exceeded what he managed to pull in himself. But he still won, by more than 3000 votes.

"From my point of view, the more people that run the merrier. It’s a strange situation because my destiny isn’t going to be decided by me, but by what the other candidates decide to do."

If he isn’t re-elected next year, Sir Tim is eyeing up getting involved in charity work or even taking a crack at the Southland Regional Council, which he says is seen as a "semi-retirement" option.

"A lot of councillors have done when they’re feeling a bit insecure, run for Environment Southland."

Comedy could even be back on the cards, he says, even though he feels like his fellow councillors have never been to a comedy show.

Perhaps they’d argue that's because they don’t have much to laugh about.

I suspect Shadbolt has lost the plot.. Time to go away now Tim and write your memoirs.

"Comedy could even be back on the cards, he says, even though he feels like his fellow councillors have never been to a comedy show.

Perhaps they’d argue that's because they don’t have much to laugh about", good on ya Sir Tim, give em ell.