Sneezy the healthbot proving a hit with patient and dog 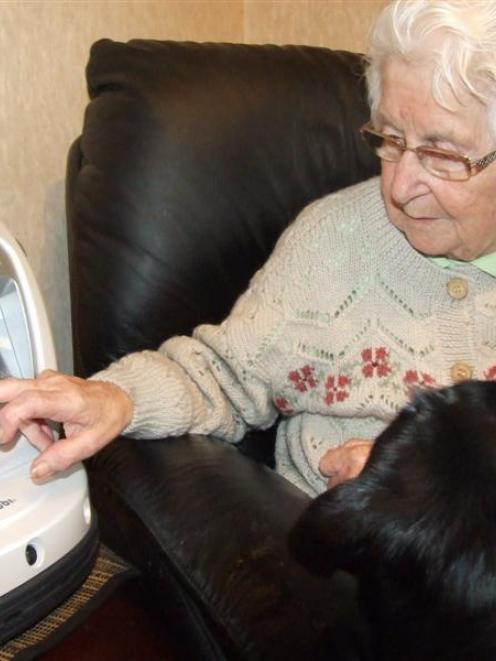 Gore woman Peggy Haar uses her healthbot 'Sneezy' in her home, watched by her black labrador, Meg. Photo by Helena de Reus.
At the age of 87, Peggy Haar did not expect to have a robot in her home.

The Gore woman is one of two people trialling health robots, or ''healthbots'', as the town becomes the first place in the country to deploy them.

The machines speak and use voice recognition to talk to patients, reminding them to take medication. They also move around and provide companionship.

Mrs Haar, who has lived alone since her husband Bernie died in November 2011, said the healthbot moved in several weeks ago, and already proved to be useful.

The robot has taken up residence in her kitchen.

Her seven-year-old black labrador Meg was not worried about the new arrival. Mrs Haar still walks her dog every day which keeps her active.

''I'm not used to technology. The bells ring first thing in the morning for the first lot of medication ... he [the healthbot] does get excited, and the grandchildren like pressing the button to make him dance.''

She said she was ''not too bad'' about remembering to take her medication, but was reminded by the robot ''from time to time''.

Daughter Margaret McCord said although she and other family members lived nearby it was reassuring to know the healthbot was with her mother.

''We're in and out all the time anyway, but it's nice to know it is there for mum.''

Once ''teething problems'' were sorted, it was hoped that some additional features would be available, Gore Health Ltd acting chief executive Rhonda Reid said.

She hoped Sneezy's Skype video-calling programme would soon be operational, allowing health staff and family members to contact Mrs Haar through the healthbot.

In an emergency, such as incorrect medication data, healthbots are capable of sending a text message indicating a problem to a nominated phone number. Mrs McCord and her mother agreed that function would be ''great'', and were also looking forward to accessing Skype.

John Redman (79) also has a healthbot in his home in East Gore where he also lives alone.

The robot also reminds him to take his medication four times a day.

Mr Redman said he hoped the robot would help keep him in his home.

Medical staff at Gore Hospital and a participating pharmacist have access to Mr Redman and Mrs Haar's healthbot data.

Mrs Reid said the data showed if and when residents were taking their medication.

Gore Health is working closely with UniServices, the commercialisation company of the University of Auckland, which launched its healthbots project four years ago. The robots use hardware created in South Korea and software developed by UniServices and other New Zealand companies.

The four healthbots were bought by Gore Health, assisted with funding from the University of Auckland and the Gore community. Another two small healthbots arrived last week - on loan from the university - and technicians are fine-tuning their software.

The larger healthbot, which will be based in the GP centre, has equipment attached allowing patients to be guided through a step-by-step process to check blood pressure and heart rate. The test data is automatically transferred to clinicians.