Some properties too flooded for residents to return 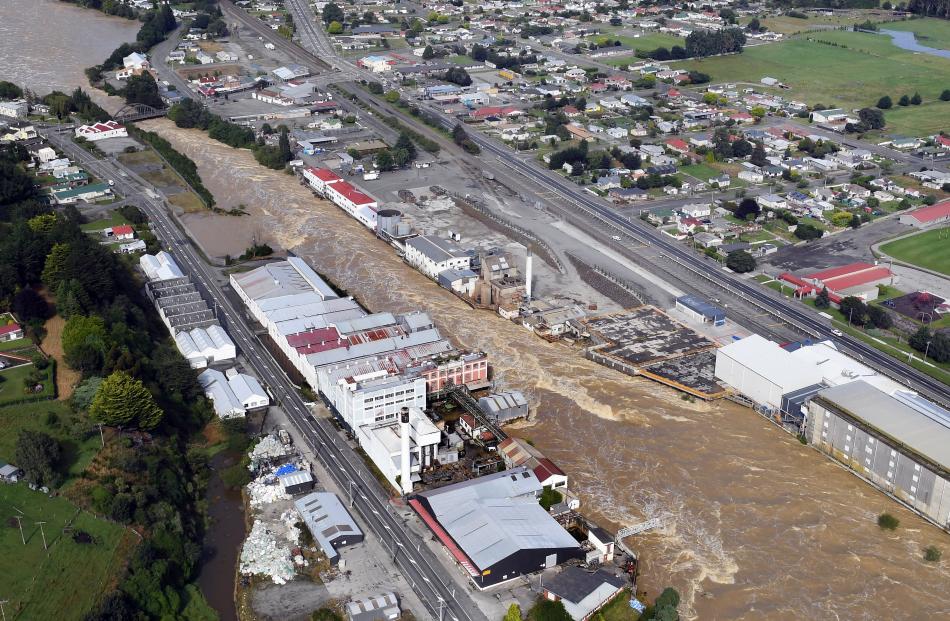 The swollen Mataura River rips through the town on Wednesday. PHOTOS: STEPHEN JAQUIERY 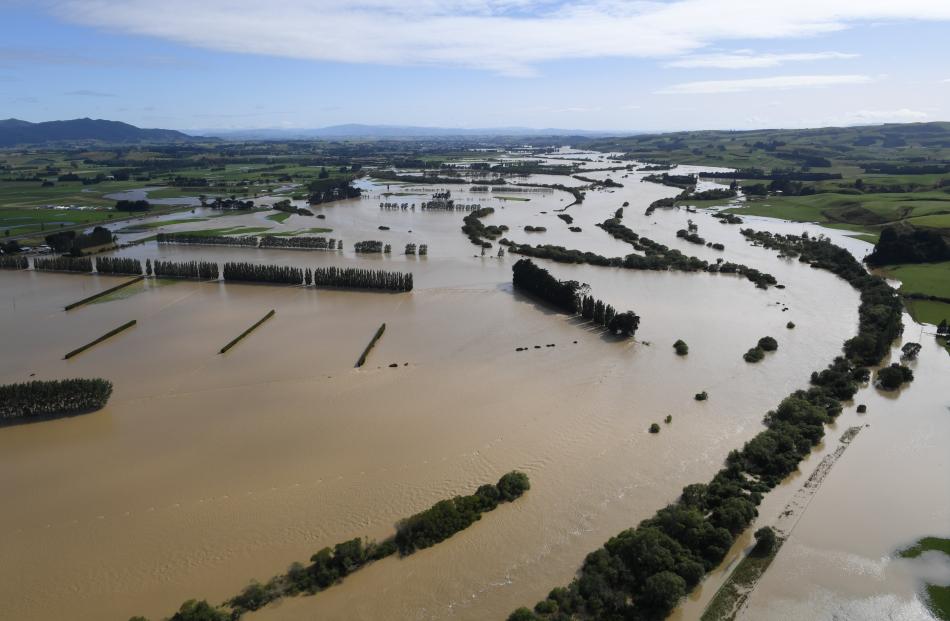 The Mataura River flows across farmland near Gore. 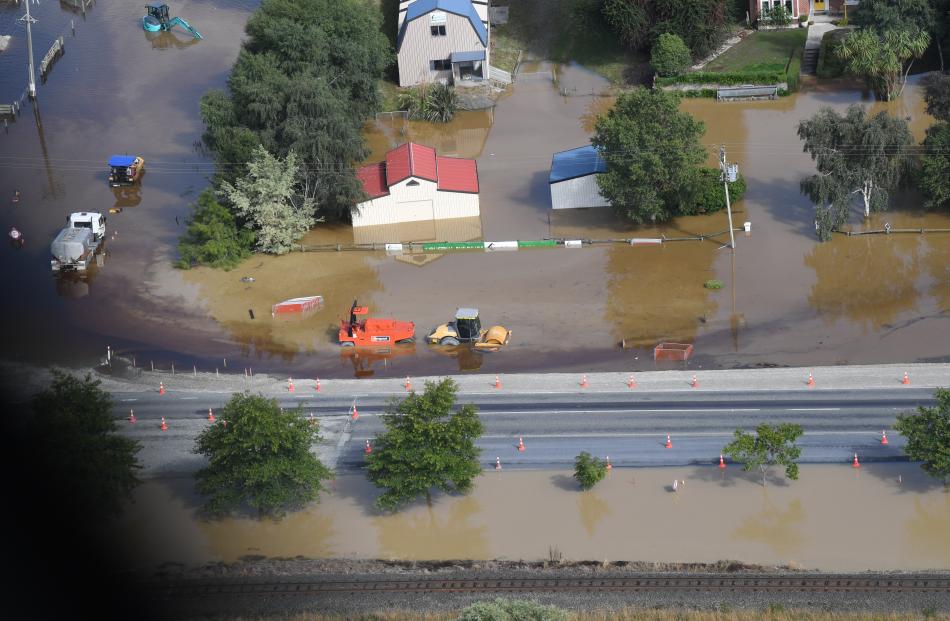 The Mataura River’s water laps about road-working machinery on Wednesday. 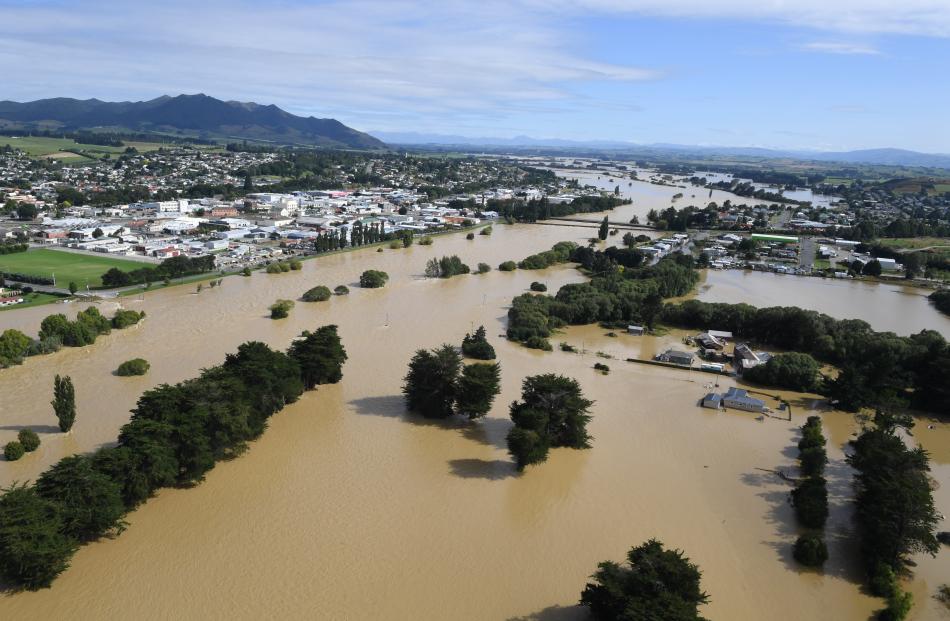 The Mataura River rises to cover parts of Gore on Wednesday. 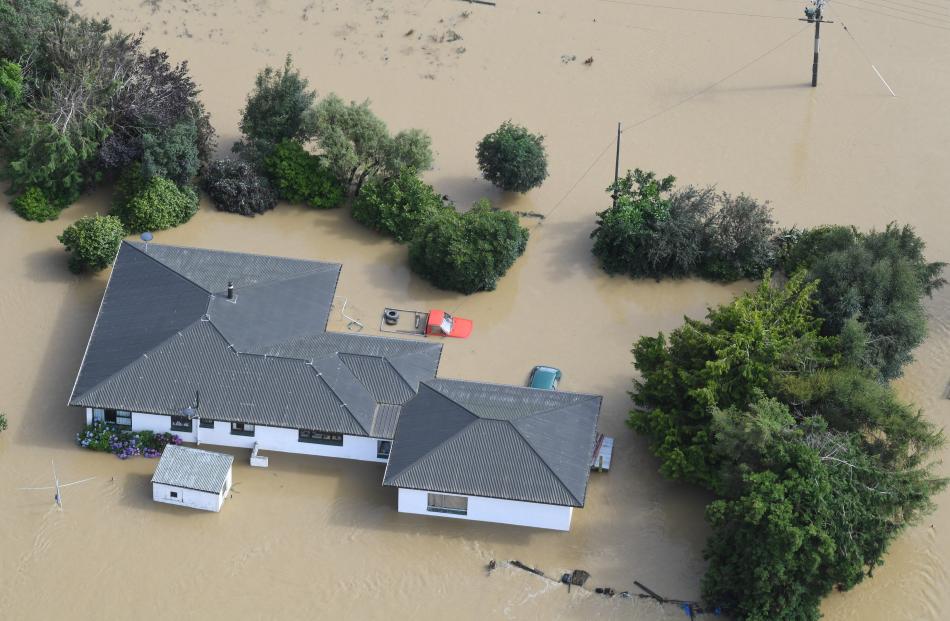 A utility vehicle sits in front of a flooded house, where it was left as the water rose. 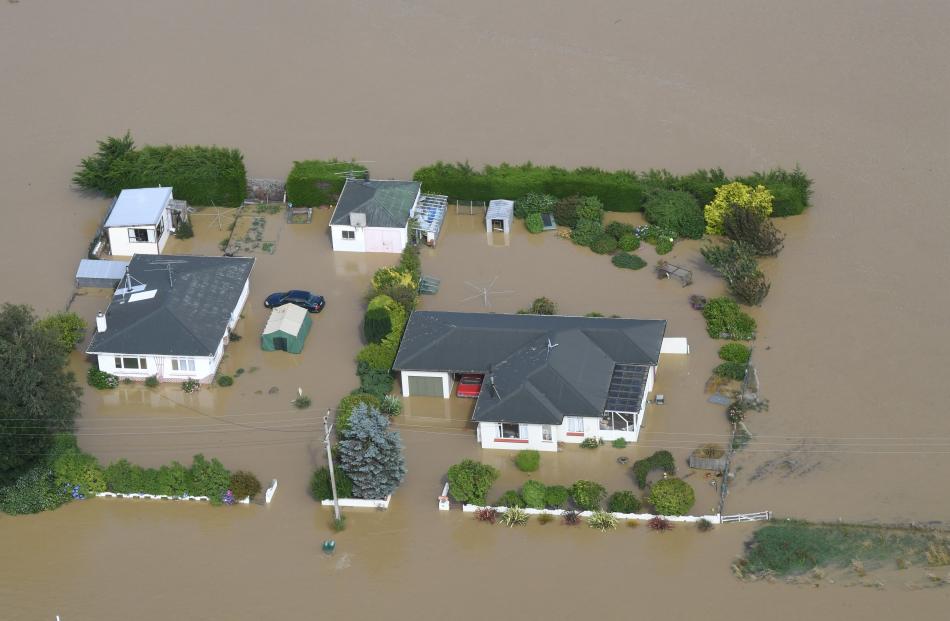 Sheds, cars and heavy machinery are swamped by the Mataura River on Wednesday. 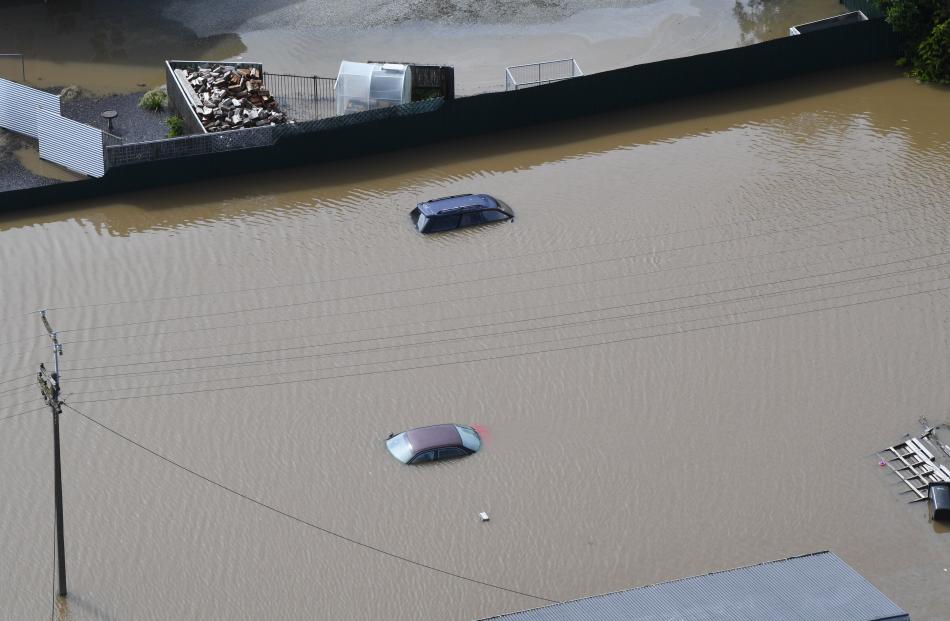 The roofs of parked cars peek above the floodwater in Gore on Wednesday. 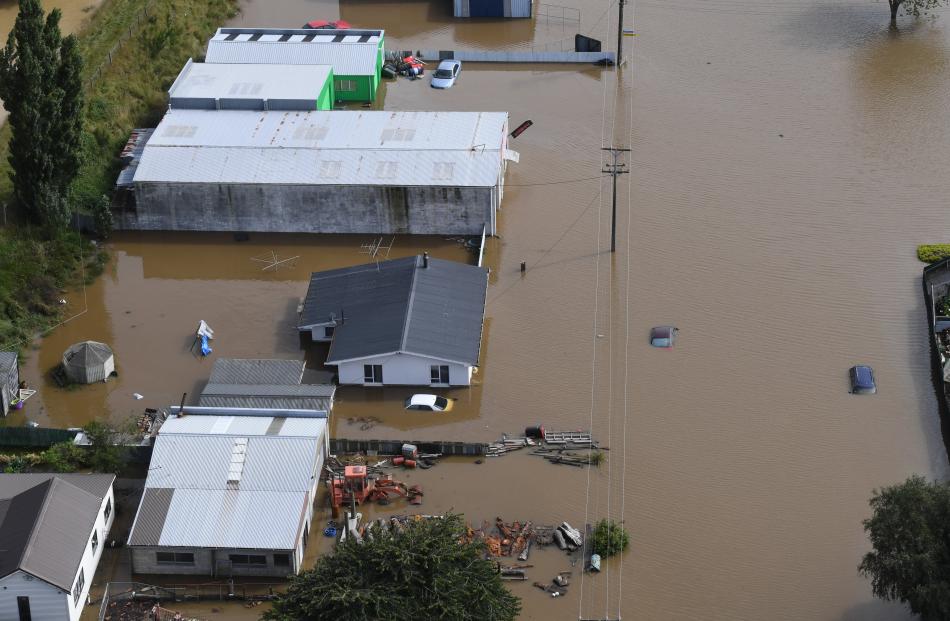 Muddy brown floodwater on Wednesday surrounds a farm that would otherwise be set in a sea of green. 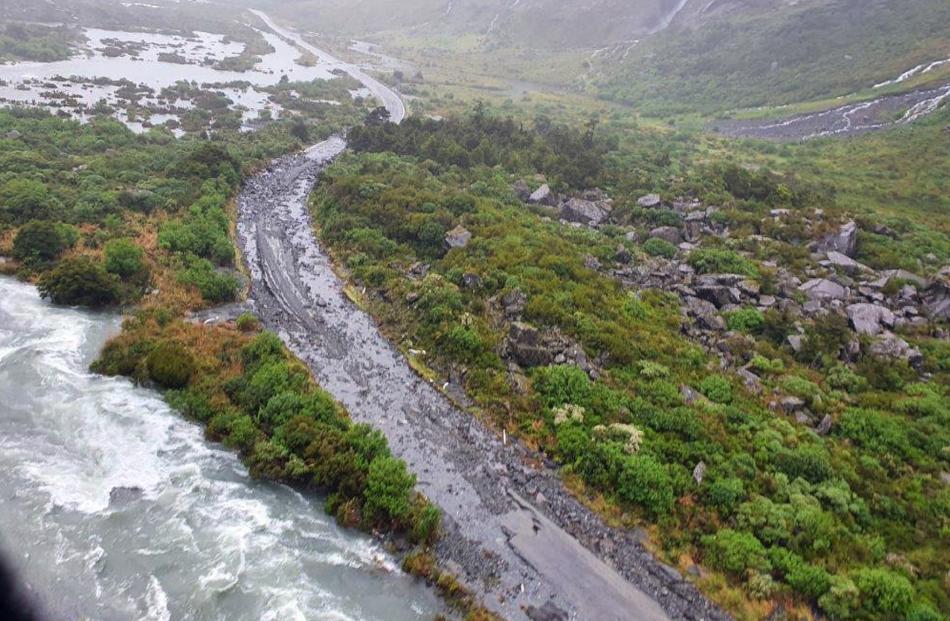 State Highway 94 towards Milford Sound was damaged in many places during the week. PHOTO: SUPPLIED 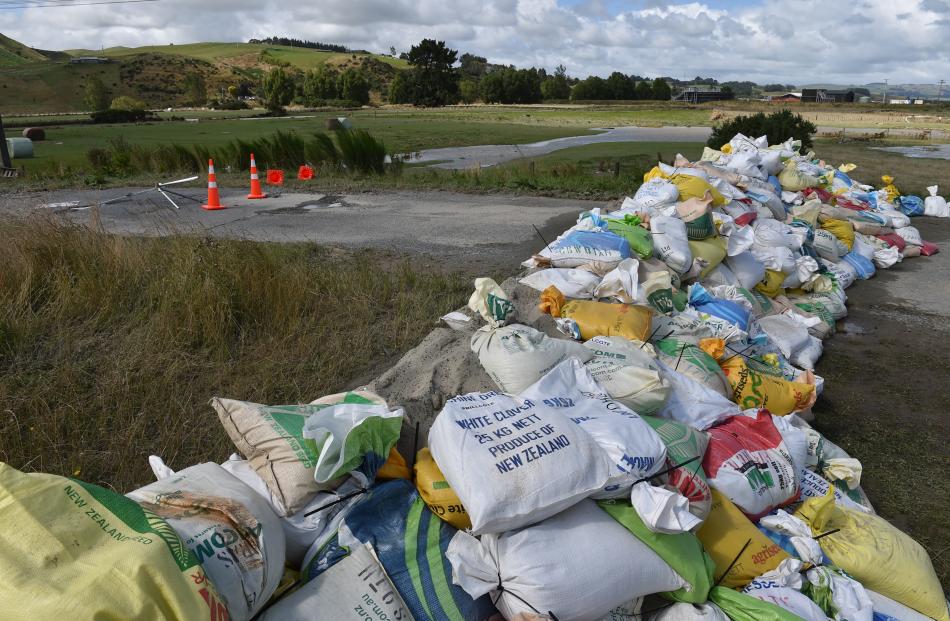 Sandbags sit dry after the floodwater receded on Thursday.

Some Mataura residents returned to the town to find their properties too flooded to live in and authorities are providing temporary accommodation for the worst hit.

Emergency Management Southland Controller Angus McKay said this morning about 30 Mataura properties were flooded, and temporary accommodation had been provided for any affected families.

In Gore, residents had been able to return to the 12 properties flooded in Ontario St, following a pumping operation to remove the water.

Pumping is underway this morning in Mataura to remove water from flooded areas and there could be delays and obstructions for local traffic, as well as noise from the operations.

There were also a few Mataura properties without power because of floodwater effects or concerns over safety. 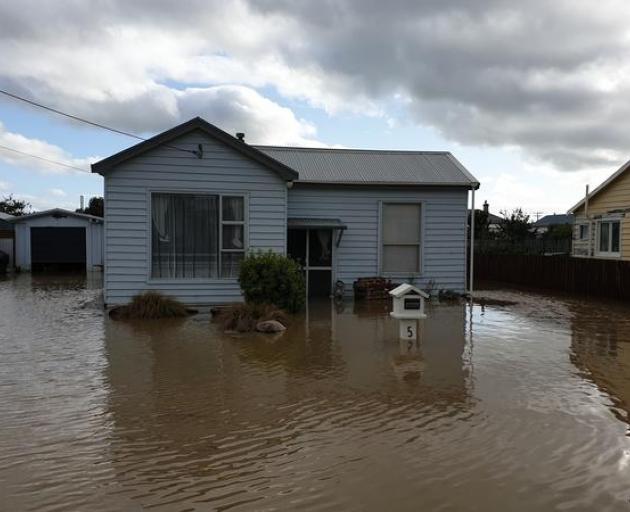 A number of houses in Mataura are still surrounded by floodwaters. Photo: RNZ/Sarah Robson
People were advised to go to the Mataura Community Centre if they needed help because of property damage or other issues.

This hub would remain open for as long as necessary.

In three severely affected rural areas MPI and the Rural Support Trust were contacting farmers to check how they are coping and whether they need additional support.

All state highways are now open with detours and speed restrictions in many areas – NZTA and AA websites have the latest updates. Many local roads are still closed or have speed restrictions. Drivers are reminded to take special care, obey all signs and instructions  and not to drive through flooded areas.

All rivers in the district have peaked and have reducing flow volumes.

Stop banks were being checked for structural integrity and so far, there were no issues. 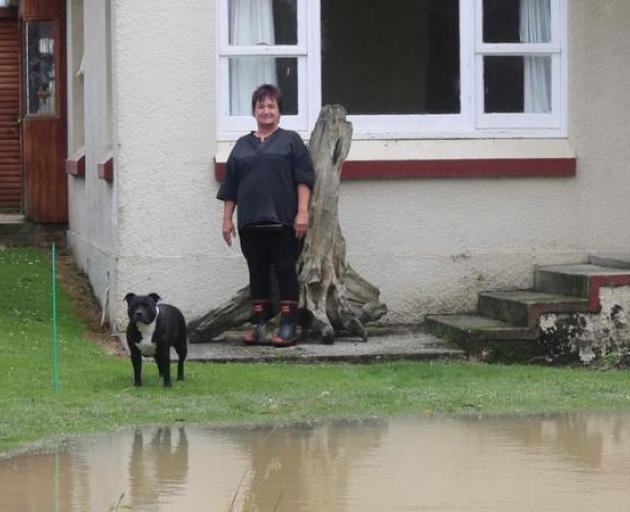 Near the Wyndham bridge, Sue Campbell's driveway has been ripped up by the force of the water that came over it. The flooding reached the porch where she is standing before receding. Photo: RNZ

Engineers were having to wait for flow volumes to recede before checking all stop banks.

Weather conditions in Southland were forecast to improve over the next few days, and although a band of rain was forecast for Saturday morning and again on Sunday, they were not expected to cause issues.

This comes as officials are beginning to count the cost of cleaning up after this week’s dramatic flooding across the lower South Island as evacuated residents return home to face the damage.

Affected councils in Gore, Clutha, Southland and Queenstown-Lakes have done early assessments of damage to key infrastructure, which range from "significant" in Southland to "not the most severe" in Clutha.

Total costs are expected to run into millions of dollars, although most authorities have been reluctant to place a figure on repairs while a state of emergency remains in place across the region.

Floodwater inundated large parts of Fiordland, Northern, Central and Eastern Southland and South and West Otago between Monday and Wednesday, leading to multiple highway and road closures and causing Gore to be cut off for more than 24 hours.

Mataura residents, Alison and George Bishop, who had to evacuate on Wednesday morning due to the flooding, entered their house last night.

Alison Bishop told Morning Report she was let back into the house about 8pm yesterday.

"Some of the water had receded for us to get into through the back door. When we opened the door there was about an inch to two inches of water left lying on the floor, but it had been to about a two-foot level. We had lifted quite a lot of stuff."

She said the water was silty and "everywhere the water's gone down, everything is just brown, brown as".

Some drying machines would help, she said.

"The carpets are just saturated, and just a layer of muddy silt all over the house. I think we'll rip all the carpets out and just recarpet ... it would probably just as expensive to do either or. We just put new carpets down not long ago."

She said she was lucky to be able to get their motorhome out, which is what they're staying in now at a friend's house.

She said she was "just heartbroken because we didn't think it would be quite this bad".

"We've just renovated and got ready for our retirement. I'm going to have to work a little longer now."

Steve Kaire-Smales who lives around the corner on Oakland Street said his heat pump was underwater and he had no power.

"[The] second car we've got in the garage is soaking wet. There's just rubbish ... I think I've got the whole neighbourhood's bark in this section."

An unknown number of properties were likely inundated or uninhabitable.

Gore Mayor Tracy Hicks was pleased Mataura people could begin to return after many expressed frustration with the evacuation.

"Any dislocation to homes causes frustration. People desire information and they want to know if they can get back to it [their home]," he said.

About 1500 people in Mataura were forced to abandon their properties on Wednesday as a churning Mataura River broke its banks.

Mr Hicks confirmed the gravity of the event: "My understanding is that [on Wednesday] in Gore and Mataura, there was more water that went down the channel than there has ever been before."

The Mataura River peaked at 2500cumecs at Gore River, and at nearly 2700cumecs at Mataura.

A boil-water notice was issued for Mataura as a "precautionary measure", Mr Hicks said.

A water tanker would provide fresh water and a welfare centre would be set up to provide information and resources.

The cost of repairing infrastructure was not known yet.

"In essence, we’ve had two events in one here, with huge run-off from local rain combined with issues with extreme river flow," Mr Hicks said.

"Roads, culverts and pumping stations have all required attention, but our focus at the moment remains getting people safely back in their homes."

"The guts of it is this is a significant event, which will require a significant amount of work to make things safe again. Compared to damage from past flood events, it’s right up there."

Although roads had been severely damaged across the region, "3 waters" infrastructure remained unaffected: "Luckily we’ve dodged that bullet."

Clutha district incident controller John Scott said it would take "some time" to assess the district’s 3000km of roads.

"Although early feedback suggests we’ve not experienced the most severe damage historically, there’s a lot of work to do. We’re just trying to get traffic moving as safely as possible."

He did not believe the eventual costs would be "huge" for the district.

A Queenstown Lakes District Council spokeswoman said staff were not assessing road or infrastructure damage during yesterday’s statutory holiday, but would resume inspections this morning.

A council statement on its website on Wednesday said a clean-up was under way to address "minor slips and surface flooding".

In Southland, 35 roads remained closed, in Clutha the number was 30 and in the Gore district 15 were yet to reopen.

Some state highways remained closed yesterday afternoon, although most had reopened.

State Highway 1 through Mataura to Gore reopened with a 30kmh speed restriction. State Highway 93 from Clinton to Mataura was also reopened.

The NZ Transport Agency said the full length of the Milford Rd was unlikely to be open before Wednesday next week, and possibly would be closed longer, due to extensive damage beyond the Main Divide.

Multiple serious slips and road washouts are apparent from photographs posted by the NZTA this week, but NZTA system manager Graeme Hall said the agency needed more time to work out exactly what would be required to fix the road.

"At the moment, we are in response and assessment stages so it will be several days before we properly understand the costs and programme of works."

The NZTA reopened SH94 from Te Anau to Cascade Creek yesterday, and expected to extend that as far as the Hollyford turnoff or the Main Divide by this afternoon.