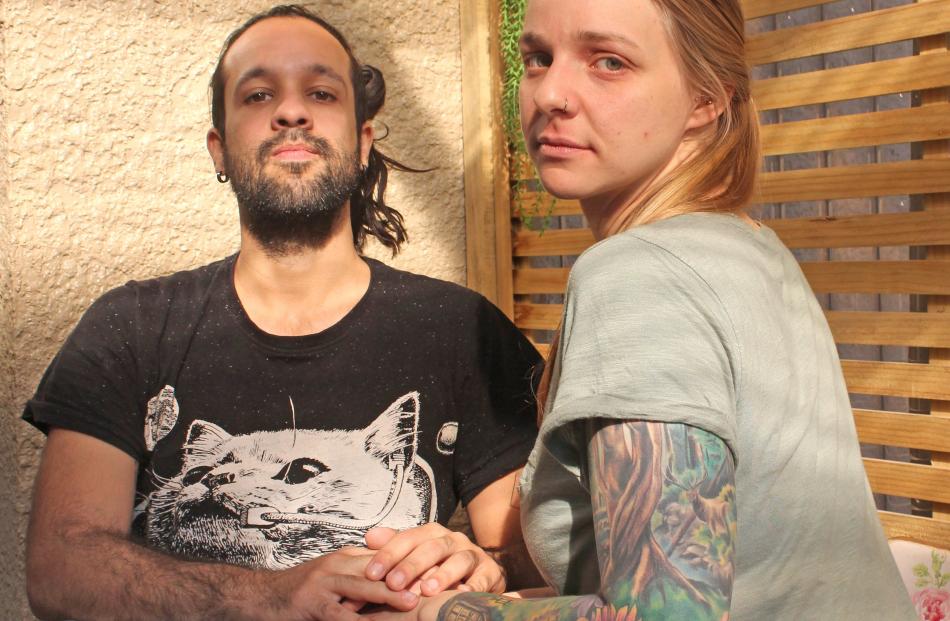 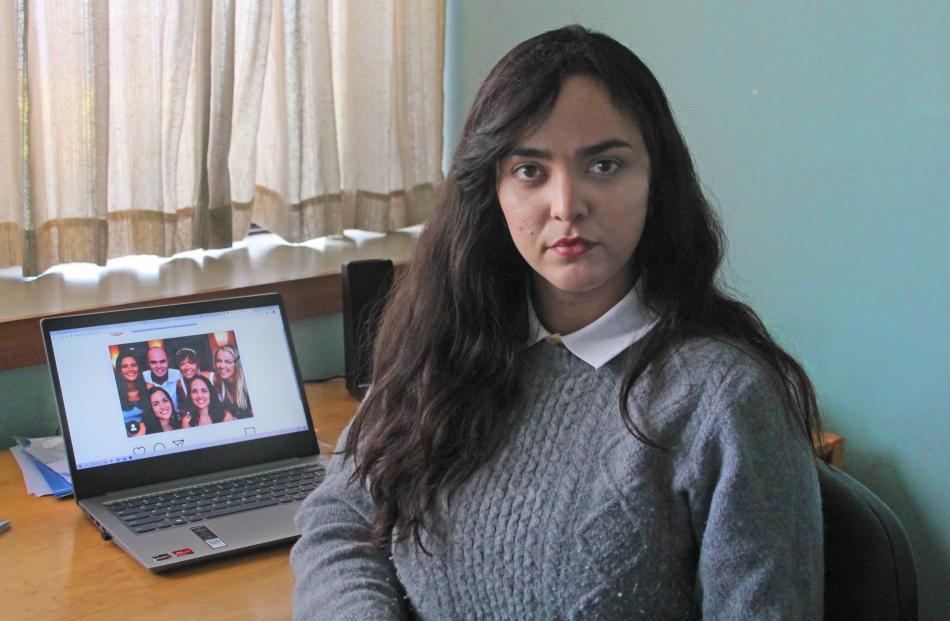 Rafaella Melo says the constant worry about her family in Brazil means she has been waking up in the middle of night. PHOTO: LUISA GIRAO 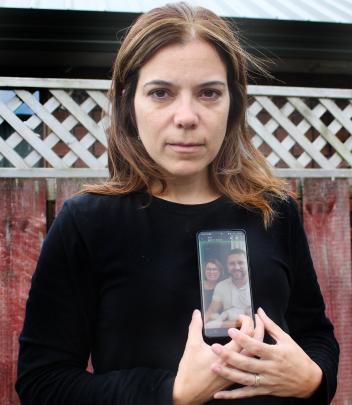 Celina Dore treasures this photo of her mother-in-law, Katia Dore, whom she had to farewell from a distance. PHOTO: LUISA GIRAO 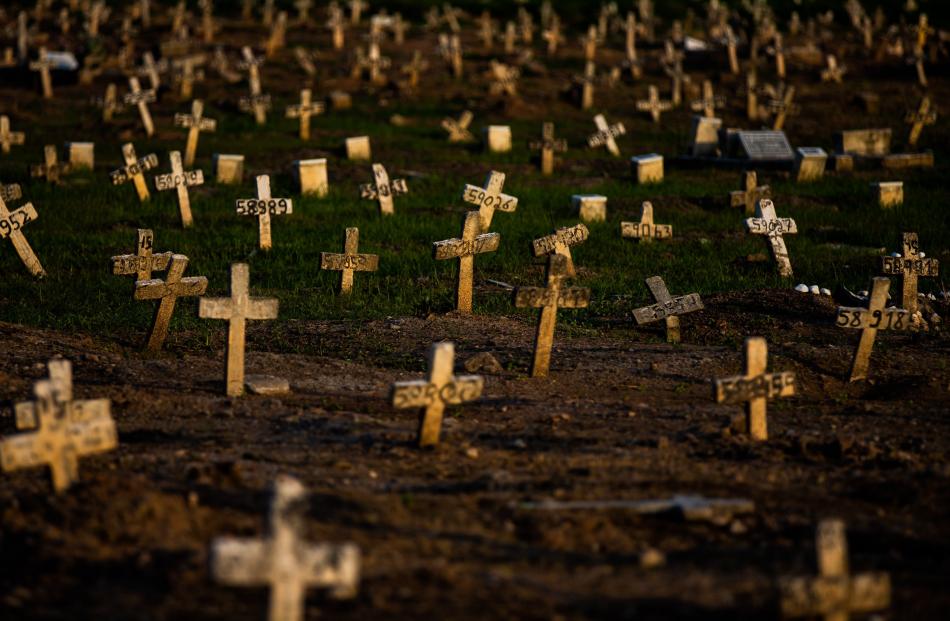 The Caju cemetery in Rio de Janeiro is filled with Covid-19 victims as the official death toll from the pandemic in Brazil passes 360,000. PHOTO: GETTY IMAGES 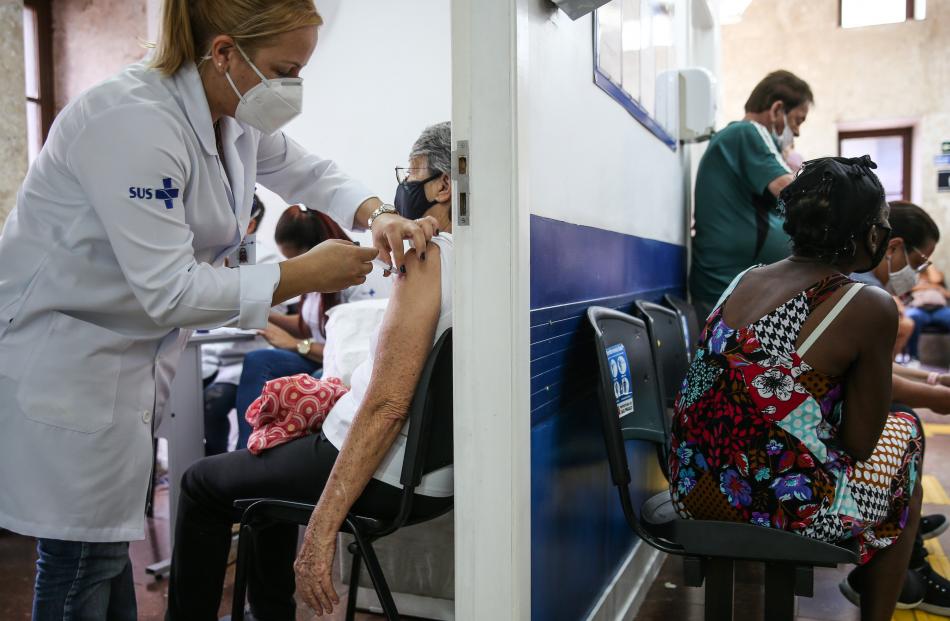 A senior citizen receives the Covid-19 shot in Sao Paulo, Brazil. Less than 4% of the country’s population has been vaccinated. PHOTO: GETTY IMAGES

Agony, hopelessness and guilt - those are some of the emotions Invercargill’s Brazilian community described to Otago Daily Times reporter and Rio de Janeiro native Luisa Girao when she spoke to them about how it feels to live in a safe place while their home country is devastated by Covid-19.

Celina Dore’s eyes become teary when she speaks about the situation her fellow Brazilians are enduring back home.

"I feel like a boat adrift — with plans and even our life on standby, relying on faith and hope to keep going," she said.

She did not know how she would be able to cope with being apart from her loved ones for so long.

Living in Invercargill, she sees herself in a place where Covid-19 seems to be under control.

But back home, in a situation a world away, people suffer and struggle to deal with thousands of people dying each day because of the pandemic.

Sleepless nights, intense heartache and a tight chest are symptoms of her anxiety caused by not knowing when she will next be able hug her loved ones.

"It is almost impossible if you are a Brazilian to not know a person who had, or lost someone to, this virus.

"I wish I could have all my loved ones safe — as we are here."

The pain got worse a month ago when she had to farewell her mother-in-law, 62-year-old Katia Dore, from the other side of the world.

When she and her husband discovered her mother-in-law had Covid-19, with 70% of her lungs compromised, they immediately packed their bags.

However, her family convinced them to stay put, as there was nothing they could do once they arrived and going to Brazil could put the health of her, her husband Marcel and children Davi (14) and Joao (11) at risk.

Updates on her mother-in-law’s condition were sent by a nurse via audio message.

Each one was agonising.

Back in Invercargill, her colleagues and friends helped ease the pain, she said.

"I don’t think they have an idea of what is happening over there — but through my pain, they understood and feel a bit what we are feeling."

After about a month in hospital, her mother-in-law was declared brain-dead and the family had to decide whether to turn off the life support.

"It was, for sure, the hardest decision of our lives.

"But it would be selfish for us to keep her alive in a vegetative state with so many people needing a bed and oxygen in Brazil.

"It is awful but we had to accept she was not there anymore."

Two days later, she was declared dead, and the family was devastated.

"We could not say goodbye to her, to grieve her. It is a feeling of guilt, pain ... something is missing."

They watched the funeral online as their family again asked them to stay in New Zealand where they were safe.

"It’s what she would want."

Telling her family about life in a country where there was no disaster was difficult for her.

"Sometimes the situation at home is so hard that I feel bad and even ashamed to share some good news or show pictures of our travels here.

"But they said we needed to share because it was important to them see us happy.

"I think that is the real meaning of love — and I feel I can give them some kind of hope."

Mrs Dore said New Zealanders could not ever take the position they were in for granted.

Her pain is not an isolated case.

"We are happy with the tranquility of a safe country where we can breath freely and live a routine, almost as if Covid-19 did not exist.

"On the other hand, it is a constant fear that the phone will ring at any time bringing bad news.

"It hurts, it saddens me. We can only be grateful and keep having hope for better days."

That sentiment was shared by Joao Pedro Evangelio and his New Zealand partner Louise Webster.

The couple were living in Rio de Janeiro before the pandemic.

When the virus first broke out, they did not realise the severity of the havoc the virus would wreak on Brazil, Ms Webster said.

However, when the numbers of cases and deaths began to increase, they decided to move to New Zealand.

It took almost eight months for Mr Evangelio be able to get an exemption to get into New Zealand.

Ms Webster said she had to explain to Immigration New Zealand how the situation in Brazil was affecting her mental health.

At the same time, she wanted to be with her family but she could not leave the country without her love, she said.

"I felt like my freedom was taken away and my choices were taken away," she said.

"I felt trapped and I couldn’t deal with it. I felt isolated."

Mr Evangelio said it was overwhelming to watch the situation back home, as the South American country had never experienced war or a pandemic situation.

"The problem with Covid-19 there is that they normalised death. For the first few deaths, everybody was shocked ... but they started to try to find excuses, saying the majority were elderly or had some health issues."

After the first wave, the numbers started to decrease, and he believed Brazilians started to relax and forgot what was really happening — now it was "out of control".

"Honestly, if things keep like we saw when we were there, we will not be able to return home for the next five years."

He said it was stressful to know his family was still in a vulnerable position.

"Of course I’m worried, thinking about them, living in the chaos and destruction.

"It is completely different from what I feel here; I have some small problems, like everybody else, but I promised myself, comparing the situation of my family and friends in Brazil, I will never complain of absolutely anything. "

Having grown up in an low-income suburban area in Rio de Janeiro, he felt blessed and thankful to be safe.

"I’m feeling privileged and I want to enjoy this for the first time of my life. But this enjoyment makes me feel guilty."