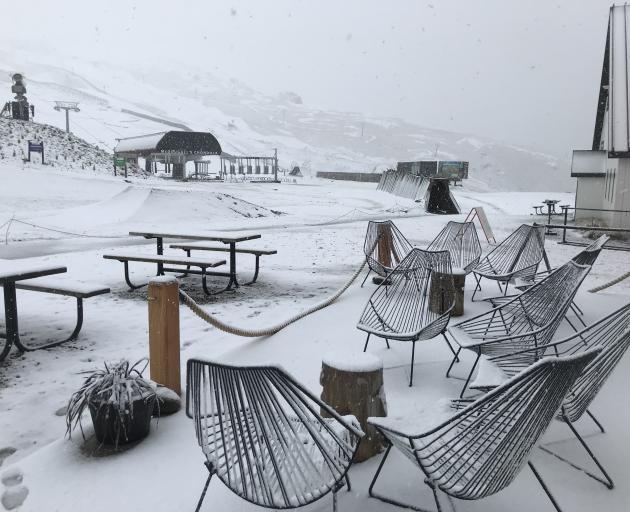 Snow at Cardrona Alpine Resort this morning. Photo: Geoff Wayatt
Snow is falling in parts of the South this morning as a southerly air flow puts the brakes on summer for a few days.

Cardrona Alpine Resort near Wanaka reports that 8cm of snow has fallen and as of 11am it was still falling.

Snow has also settled at The Remarkables skifield  near Queenstown.

The Queenstown Lakes District Council has advised that Mt Aspiring Road is closed at Glenfinnan Ford owing to flooding.

While cool air has already turned up in many places around the South Island, it's likely to hang around for the next few days as the low pressure system drags up cool air from the Southern Ocean. Queenstown has dipped below 10C which is their average Jan overnight low. ^Lewis pic.twitter.com/ieAdxSmiFi

The unseasonal snowfall comes amid predictions of heavy rain and strong winds for the centre and south of New Zealand.

MetService forecaster Mmathapelo Makgabutlane said the western South Island, including the Fiordland region, could have 150-250mm of rain throughout today and into tomorrow. 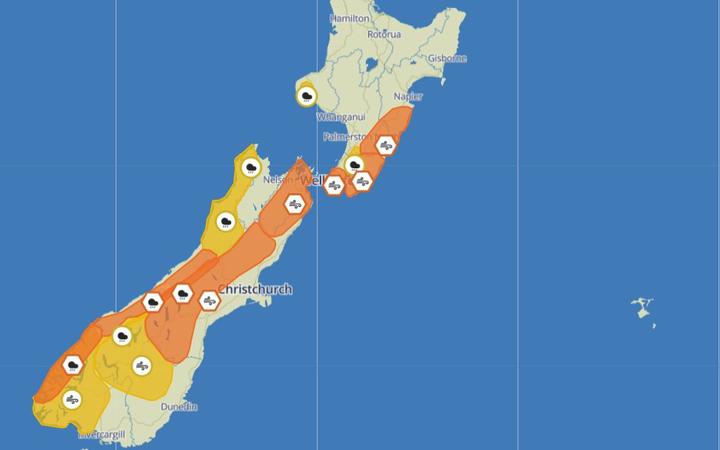 Rain and wind warnings are in place for many southern and central parts of New Zealand today. Image: MetService

In Westland, thunderstorms may continue during the day along with strong wind and even hail.

Makgabutlane said temperatures in the South Island were starting to fall.

"From today, already we see those temperatures starting to drop over the southern parts of the South Island, and all the way into the southern lakes as well."

Wanaka and Queenstown would reach a maximum of 15C, well below the January average, she said.

"Those cold temperatures continue into Thursday with the first signs of back to average temperatures only coming through by the end of the working week."

A southerly air flow behind a cold front is bringing the cooler air from the Antarctic, with the drop in temperature partly responsible for the thunderstorms.

"Those cool temperatures, especially in the upper atmosphere, cause quite an unstable atmosphere, bringing very favourable conditions for [the] thunderstorm activity."