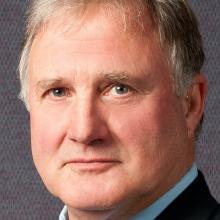 Gerry Eckhoff.
Complaints against the Otago Regional Council have been laid by Cr Gerry Eckhoff with the Ombudsman and also the Office of the Auditor-general over  exclusion of the public from a recent meeting.

A decision was publicly released by the regional council late  on Friday, from an in-committee, meaning non-public, non-media meeting on Wednesday, which the ORC yesterday defended  on the basis the decision could be appealed.

The regional  councillors voted in favour of accepting commissioners’ recommendation that a minimum water flow be set for the Lindis River catchment in Central Otago.

Mr Eckhoff released a statement yesterday outlining his complaints, and in an interview said  not having the issue aired in public revealed a "grossly inappropriate process".

He had sought to have the meeting in public, but lost out  in  a  vote and the meeting subsequently went "in-committee".

He was asked why he considered the Lindis River flow a "controversial issue" and why it deserved a public airing.

He said the outcome "will be seen by some as setting a precedent for other water-short areas" in the setting of other rivers’ minimum flows in the future.

"I consider the process which followed; enacted by the [ORC] chair Cr [Stephen] Woodhead and deputy chair of the ORC, Cr [Gretchen] Robertson, who was also chair of the hearing panel,  has effectively disenfranchised the public’s interest in this matter," Mr Eckhoff said in his statement yesterday.

Mr Woodhead was contacted yesterday for comment, in turn leaving it to ORC chief executive Peter Bodeker to respond, in an email.

Council staff made the recommendation to hear the Lindis matter in public exclusion after  seeking legal advice  on matters  where a decision by the council is open to an appeal in a court or tribunal, Mr Bodeker said.

"This decision made by council on the hearing panel’s recommendation can be appealed in the Environment Court," he wrote.

He said the public did have  an opportunity to be part of the process, with there being "a large number" of submissions by various parties, many of which were heard during a six-day public hearing.

Mr Eckhoff said he had filed letters of complaint with the Ombudsman and the Office of the Auditor-general.

"I consider that ‘due process’ was wrongly, if not unlawfully, set aside during the ‘closed session’ of the council meeting," he  said.

Mr Eckhoff was circumspect while being interviewed yesterday, saying by talking about details, who voted for what, or the voting numbers on Wednesday, he could be in breach of ORC standing orders.

"It’s totally frustrating not being able to talk about it," he said.

He claimed Mr Woodhead had since emailed councillors "to reinforce the requirement/demand" that councillors not disclose how they, as individuals, voted on the Lindis recommendation.

He said he had asked Mr Woodhead last Friday  to release the information, once the minimum flow decision was made public, but Mr Woodhead had not responded to him.

Mr Eckhoff said he wanted to "totally disassociate" himself from the process, where councillors "have effectively been gagged by inappropriately going into publicly excluded session for the decision-making process".

However, Mr Bodeker said Mr Eckhoff could not  disassociate himself from  the process of considering the hearing panel’s decision, given he took part in all aspects of the meeting after the council had agreed to hold it in public exclusion.

● The commissioners had recommended that a minimum flow of 900 litres per second of surface water be accepted for the Lindis River catchment, the river having historically been overallocated.

A minimum flow limits when water can be taken from a river during low-flow conditions,  leaving sufficient water for aquatic ecosystems, and retaining a river’s natural character.