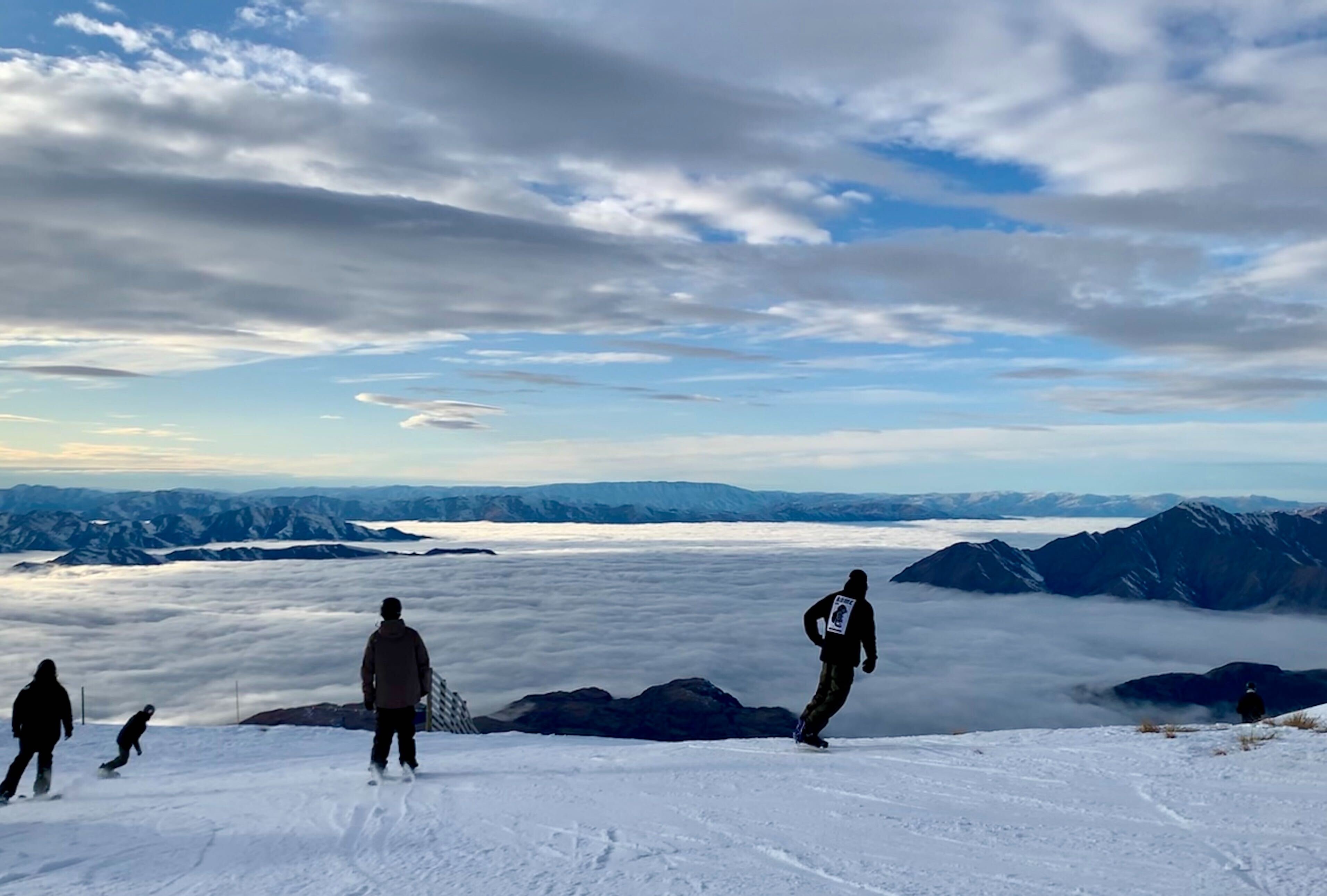 Early snowboarders and skiers take to Treble Cone's Triple Treat slopes on the opening day on Saturday, with a backdrop of mountains peaks peeking through the inversion cloud over the lake and Wanaka. PHOTO: JAMES MULCAHY
"Fabulous" was how Cardrona Alpine Resort and Treble Cone general manager Bridget Legnavsky described opening day at the Treble Cone skifield on Saturday.

About 1000 locals, including 896 skiers and snowboarders, attended.

It was "limited skiing" on the mountain but people did not really care and many hiked to the summit, she said.

The Treble Cone opening was a day after Cardrona Alpine Resort was opened by the Prime Minister Jacinda Ardern.

Ms Legnavsky estimated there were hundreds of people on foot who came just to see the prime minister.

That was in addition to the 1850 skiers and snowboarders who attended.

"It was an incredible day — much bigger crowds than we had expected.

"It was amazing how the community just came together and showed so much love and appreciation for our prime minister, which was really inspiring."

Ms Legnavsky said a decision on whether to open on Thursday and Friday would be made later in the week but it would definitely be open for the weekend.

"We need to rebuild the Easy Rider trail because it has had a lot of moisture on it today."

She said the wet weather had already brought fresh snow to Cardrona and it would hopefully bring snow to Treble Cone overnight.

Ms Legnavsky said both skifields were now preparing for the July school holidays "which would give us an idea of what sort of business we are going to get and how the season will go".

Over the range NZSki chief executive Paul Anderson said Friday and Saturday were the biggest and busiest first two days of the ski season at Coronet Peak he could remember.

Car parks were full on Saturday by 10.30am and about 1200 vehicles were up the mountain.

Mr Anderson attributed the busy opening weekend to a combination of good snow, along with the Covid-19 lockdown creating a desire for people to get out and about again.

“There was a real sense of gratitude, which was really nice for the staff to experience as well ... for the efforts we’ve been through to get open and everything the staff have done.”

The Remarkables skifield is set to open this Saturday but the new chairlift will not open for another month.

The project has to wait for a specialist rope splicer, who is expected to arrive on the mountain later this week after self-isolating in Christchurch.