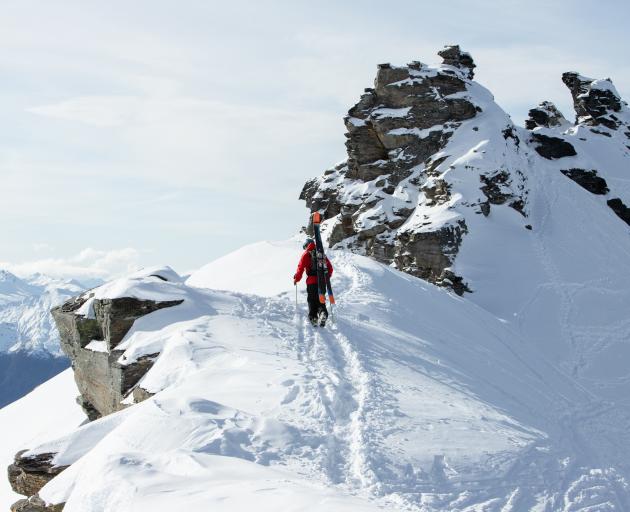 Treble Cone skifield patroller Sven Gorhan on his way to assess snow conditions on the summit slopes. PHOTO: JACKSON LANA
Wanaka’s Treble Cone skifield is well known for being the largest in the South Island, for having challenging steep runs and off-piste terrain, and for being the gateway to backcountry ski touring. Both areas are attracting more and more skiers and riders seeking a purist wilderness experience, but as the snowline rises due to climate change so does the risk of an avalanche. Kerrie Waterworth reports.

It was a bitterly cold winter's morning, the overnight storm had gone and the first rays of sunlight were just touching the summits when the stillness of the morning was broken by what sounded like giant footsteps on the mountains.

In my half-awakened state I soon realised it was not giant footsteps but the echo of explosive charges detonated by the Treble Cone avalanche patrol team to trigger ricocheting controlled avalanches to make the skifield safe for visitors that day.

Patrol manager Brendan Kearns has worked with the ski patrol for 17 years and said he never grows tired of being the first person on the mountain, making observations, and making fresh tracks.

"It is a special place."

Mr Kearns said weather, wind and new snow created the biggest avalanche hazards at Treble Cone and "the steeper the terrain the more avalanche risk we are dealing with." 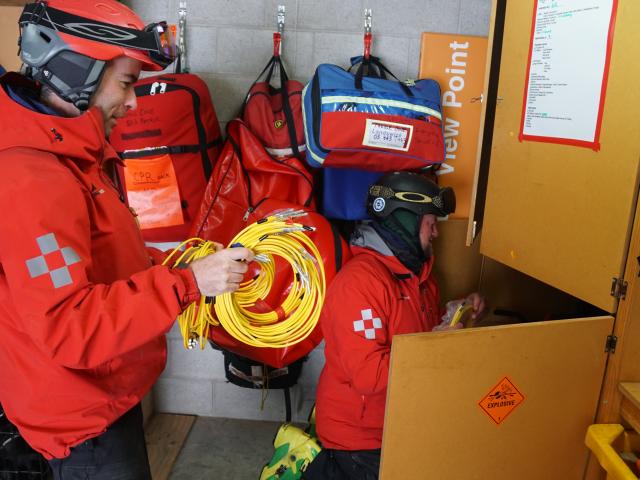 Erik Besselman and Tony Donaldson preparing their packs, detonators and fuse cables for an early morning avalanche control run on Treble Cone skifield. PHOTO: RICHARD BIRKBY
Treble Cone has more than 300 known avalanche pathways and it can take the patrol team anywhere between two and three hours to check them for avalanche hazards.

Mr Kearns has worked as an avalanche dog handler for the past 14 years.

"Avalanches have occurred during that time and people have got caught but I still haven't been to a site where I have had to dig anyone out."

He has worked in the industry for 20 years and has started to see the effects of climate change and warmer winters in a decline in the amount of snow falling in the alpine areas and an increase in rainfall at the same time.

"The snowline is going higher up the mountain and people are going into areas which are still avalanche prone but way more accessible because they are not blocked out by snow.

"Your typical back-country user in the Wanaka area would use the TC skifield facilities to get into the back country but with changing weather patterns people can access alpine environments without having to go through the skifield and they might not be aware there is a risk of an avalanche."

He said even day hikers could be at risk as some avalanches can go from the top of the mountain to the valley floor.

Mr Daisley said the council was pushing a "very strong message" that if people wanted to go into the back country they needed to first check avalanche.net, the avalanche advisory website.

"It's not just looking at the red, orange, green, yellow colour coding but looking at the forecast given and if you don't understand it then maybe you should reconsider whether you should be going in to the backcountry at all, or maybe choose to go with a commercial operator or guide."

Treble Cone skifield patroller Erik Besselman carrying a backpack of explosives to trigger any potential avalanche hazards. PHOTO CREDIT: RICHARD BIRKBY
Mr Daisley said commercial operators and guides "knew exactly where they are going, do their own assessments in those areas and they will choose places they know are a low risk for avalanches".

In her book Avalanche Awareness in the New Zealand Backcountry author, avalanche forecaster, educator, ski patroller and mountaineer Penny Goddard said statistically you are most at risk from avalanches in New Zealand if you are climbing, tramping, skiing, snowboarding, hunting, working in avalanche country or participating in mountain skills training.

"Avalanches don't invade our territory, we invade theirs."

She said most avalanches occurred during and within about 24 hours of a storm and people should not rely on outrunning an avalanche in the backcountry as they can travel at 200km per hour.

Wanaka and Queenstown are hubs for snowboarding, skiing and ice climbing, and the ski resorts provide access to the backcountry.

Ms Goddard warned the proximity to controlled terrain could cause people touring there to "drop their guard".

Mr Daisley agreed. He recommended anyone exploring the backcountry and not aware of the avalanche risk to knock on the door of the ski patrol and ask their advice.

He said New Zealand's geography and the proximity of the mountains to the sea made windslab avalanches more common here than anywhere else in the world.

The avalanche patrol team was "absolutely critical to Treble Cone", making sure as far as it was humanly possible that there was no risk of avalanche for anyone within the boundaries of the skifield, he said.

"They are passionate about the environment and helping people get there safely. They go about their business expertly, professionally and quietly in the background and do such a fantastic job you don't really hear about them."

Having met some of them I'd agree, except perhaps on a winter's morning when the quiet stillness is suddenly broken by what sounds like giant footsteps on the mountain as the team sets off controlled avalanches on Treble Cone.

-This story is part of the Otago Daily Times contribution to Covering Climate Now, an international campaign by more than 170 media organisations to draw attention to the issue of climate change ahead of a United Nations summit on September 23. To read more of our coverage go to odt.co.nz/climate