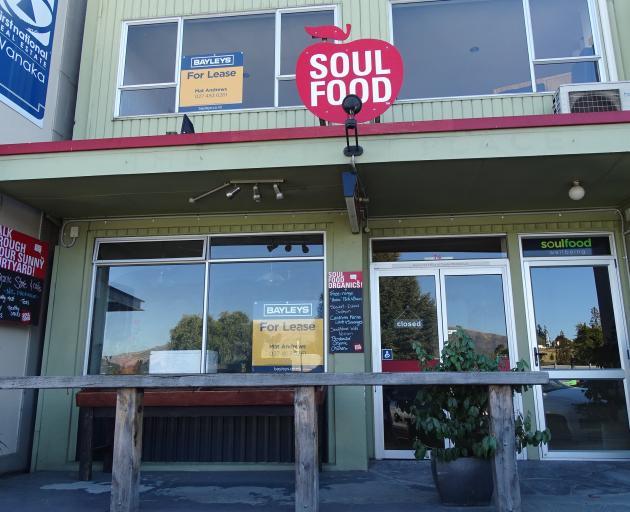 The impact of Covid-19 has been too much for the owners of organic store and cafe Soulfood in Wanaka’s Ardmore St. PHOTO: KERRIE WATERWORTH
A new tourism campaign encouraging locals and the rest of New Zealand to explore Wanaka and the Upper Clutha may have come too late for at least one business in the lakeside town.

Late last week Lake Wanaka Tourism launched a social media and poster domestic tourism campaign called "Have You Ever?" encouraging locals and regional visitors to explore their own backyard.

The economic pressure being felt by many Wanaka businesses was discussed at last week’s Wanaka Community Board meeting.

Queenstown Lakes District deputy mayor Calum MacLeod said there was the potential for more businesses to follow Ardmore St organic store and cafe Soulfood, which had closed due to the economic downturn.

"Potentially there will be an array of businesses that could close. Maybe there are too many cafes in town, I don’t know, but certainly there is pain being felt, so be kind," he said.

Wanaka community board member and Warbirds general manager Ed Taylor said the worst thing about the economic impact of Covid-19 was its effects were not felt evenly.

On the surface Wanaka looked normal apart from fewer cars, but that was not the reality for a lot of people and not everyone was doing well, he said.

"I know firms (at Wanaka Airport) that have asked their engineers to see if they can find other work because they just have not got the work for them. These people all have families and kids at the schools and the knock-on effects are large," Mr Taylor said.

Lake Wanaka Tourism general manager Tim Barke said they had campaigns ready to roll out in Australia now the border was about to open. But they were also geared towards the domestic market, as it was a very strong market for Wanaka and would continue to be so.

A lot of tourist operators were still struggling but almost all of them had not yet tipped over despite pressure to drop their prices for the domestic market, he said.

"Tourism operators have significant costs they have to cover to be able to operate and a lot of those costs are fixed, so it is really difficult to drop your price.

"I know in some cases some operators have done deals where they are actually effectively paying the customer to go on their trip because the revenue is not covering their costs. But they still want to be in business and keep offering the service," he said.

Ignite chamber of commerce spokeswoman Naomi Lindsay said businesses were managing to hold on, for now.

"They have certainly missed the usual busy summer and autumn season. The string of long weekends and holidays only go a certain way to supporting the business," she said.

In February Ignite surveyed 112 businesses in the Upper Clutha and more than half said they expected their own business situation to deteriorate in the next three months.