Coutts at regatta to help and inspire young sailors

A five-time winner of the America’s Cup, Olympic gold medallist and 2017 America’s Cup CEO Sir Russell Coutts was invited by the Wanaka Yacht Club to introduce a new race at the club’s annual New Year Regatta, a leg of the O’Pen Bic Junior National Circuit, and to reintroduce the "fun" element to junior sailing. 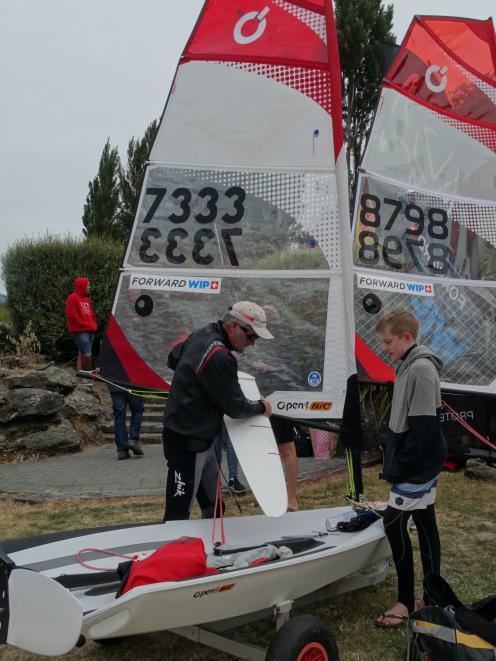 Sir Russell helps Jacob Goodall, of Napier, prepare for the inaugural O’Pen Bic race on Lake Wanaka.
"What the club is doing down here for junior sailing is fantastic. It’s bringing more kids into the sport, so I’m happy to help," Sir Russell said.

Thirty-six O’Pen Bic boats competed in the O’Pen Bic races around Lake Wanaka on Saturday and yesterday and the young sailors took part in coaching sessions with Sir Russell. Former Team New Zealand sailor and Lake Wanaka Yacht Club coach Barry McKay said that six months ago, the club did not have one O’Pen Bic boat, but it introduced them as a way to "reinvigorate youth sailing" and make it more fun.

"Some of the boats kids learn how to sail on are 40 to 50 years old in design. The O’Pen Bic is a new class of boat; it’s a skiff-like design, it can’t sink and it goes very fast."

Mr McKay said having Sir Russell in Wanaka was also a big part of creating a fun environment and an inspiration for young sailors. Two months ago, Jacob Goodall (13), of Napier, was going to give up sailing but after meeting Sir Russell at the Sir Peter Blake Torbay regatta in early December and attending an O’Pen Bic coaching clinic in Wanganui a week later, he could not wait to meet Sir Russell again in Wanaka.

"He helps everyone in the race, which is good. He gets everyone’s boat set up the same way, and he gives you tips on how to sail better and how to keep everything properly on the boat," Jacob said.

At the awards ceremony last night,  the Wanaka Yacht Club also announced winners of O’Pen Bic scholarships. Coach Barry McKay said the scholarships were sponsored by local Wanaka businesses and would  give the recipients  the use of an O’Pen Bic boat for a year and the opportunity to travel to other South Island regattas to compete.

"This is a new concept in getting kids out on the water without having to buy a boat. Our measure of success is not whether we produce an Olympic champion or an elite sportsperson but how many kids we can retain in the sport, and the scholarship should go some way towards doing that," he said.