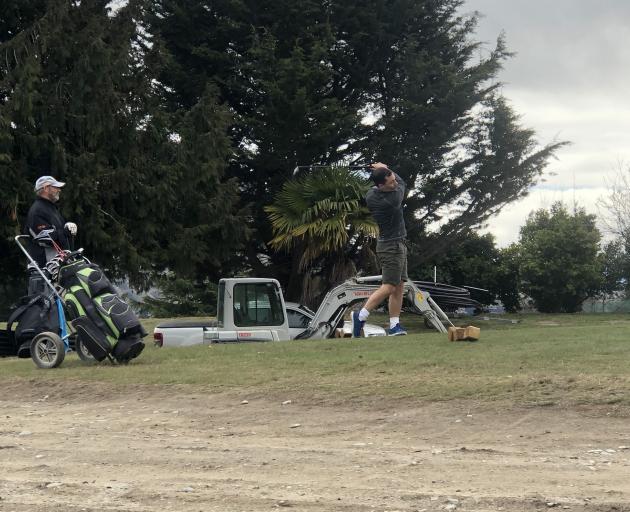 David Lee and Jamie Nesbitt play golf on the first nine at the Wanaka Golf Club, reduced to an eight-hole course during the irrigation upgrade project. PHOTO: KERRIE WATERWORTH
A Wanaka Golf Club director overseeing an upgrade of the club’s irrigation system believes members who oppose the project do not understand there has been a change in water consents and a change in attitude towards the environment.

Project co-ordinator Terry Carr said 10% of the membership voted against the one-in-30-year upgrade on the western half of the course at last year’s annual meeting.

He said their preferred option was to keep the existing system, which he described as "old and failing" and costing $20,000 each year to repair.

Some members may not be aware their water allocation had changed, Mr Carr said.

"Our consent was due to be rolled over but due to the low levels of the Cardrona river we lost some water rights."

The club has had to make better use of its water and look after the environment better and "that required better water controls".

"We have tried to explain that to them but not everyone can pick up on where we are heading and our vision," he said.

Grants from Central Lakes Trust, Otago Community Trust and the Lion Foundation, plus a levy on every member, are expected to cover most of the $550,000 cost of the upgrade.

Wanaka Golf Club has around 1000 members. With 7000 green fee players per annum, it can claim to be the largest golf club in the South Island.

Advanced Irrigation Systems began replacing the old pipes around the first nine holes, east of McPherson St, at the end of June.

Club manager Kim Badger said the upgrade had been planned to coincide with the club’s quietest period of the year, but then Covid-19 arrived.

Normally in June there would be "a mass exodus" of members to warmer climes, but due to Covid-19 border closures they were "stuck" in Wanaka, she said.

This winter had been the club’s busiest period ever and reduced daylight hours meant players had to book early to get on the course.

She said the irrigation upgrade was on track to be finished before the first major golfing tournament next month.