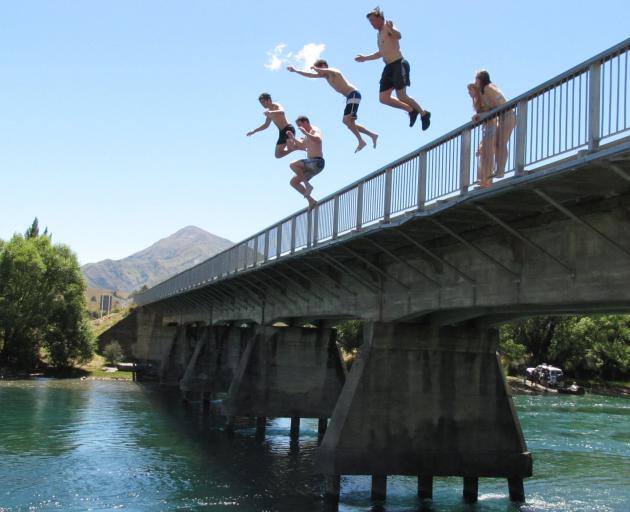 Mr Black said the signs had gone up ''for obvious reasons''.

''There's been six or seven people this summer who have come to grief after jumping off the bridge and there's a risk there.'' 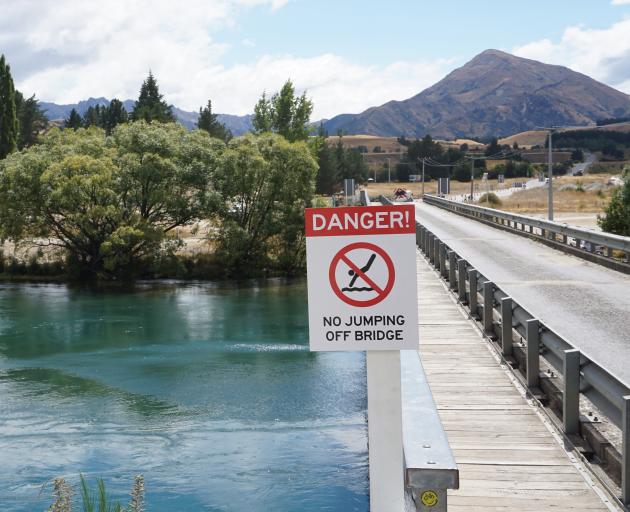 Signs have been erected at the Albert Town Bridge by the New Zealand Transport Agency banning people from jumping off the bridge. Photo: Sean Nugent
Those risks included the strong flow of the Clutha River, as well as willow trees located downstream.

''There's various ways people got into trouble and we can't ignore that,'' Mr Black said.

''How would we feel if we lost someone there? We've been pretty close a few times.''

While the signs stated ''no jumping'', Mr Black said they were more of a warning than a total ban.

There was no way to police it at this stage, although that could change with a bylaw amendment in the future.

He said the number of people jumping had ''increased dramatically'' in recent years, but his personal belief was that it was not dangerous, particularly now jet-boats and other powered craft were banned from that stretch of river.

''This is an activity that many people, especially teenagers, get a kick out of, and almost all of them do it multiple times and do it safely and without incident.

''The ban is not only an overreaction, it is heavy-handed and simply can't be justified on safety grounds because by any measure it is a safe activity.

''We don't ban skiing at Treble Cone or Cardrona because every season people break legs and rupture knees.''

I think the authorities should also look at the tower at Puzzle World ... the number of photos I've seen of people trying o keep that thing from falling over and injuring someone must be a great concern .... especially for ACC and the 162 back strain injuries over the last year which cost the taxpayer $15.5m (figures obtained from undisclosed and totally unreliable source)

My guess would be that Mr Cowie used to (and possibly still does) have a great time jumping off that bridge every summer ... Mr Black not so much !

Maybe the two gentlemen mentioned should settle the matter by jumping off the brige and seeing who makes the biggest splash .... come on guys .... I dare ya !!

What about how many people have fallen off bike riding around Wanaka this holidays? Close all the tracks if more than 6 people got hurt. This is just stupid. So what is the fine? It will be ignored.