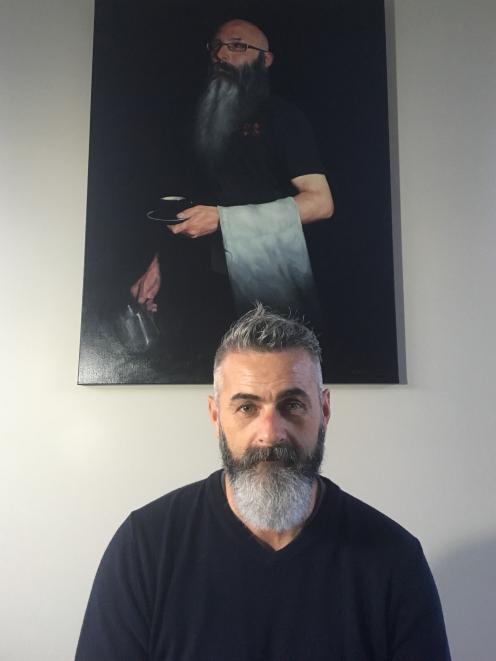 Luggate artist Stephen Martyn Welch is flanked by Robert Holt, barista, one of the portraits he will be displaying in his ‘‘Everyone Deserves a Portrait’’ Wanaka exhibition. PHOTO: ALEXIA JOHNSTON
The Upper Clutha district is set to host a landmark exhibition of art with a difference. Pam Jones meets the artist who has decided everyone needs a portrait.

Some of the people who make a difference in the Upper Clutha district are set to be honoured in a venture that puts unsung heroes centre stage.

The initiative is from Luggate artist Stephen Martyn Welch, whose ‘‘Everybody Needs a Portrait’’ Wanaka series celebrates ‘‘ordinary people with extraordinary stories’’.

Welch, a portrait artist who won the national Adam Portraiture Award in 2012, has already painted many portraits of the ‘‘rich and famous’’.

He also hosted his own television art show, where he interviewed well-known New Zealanders while painting their portraits. The two series of The Sitting screened in 2008 and 2011.

But Welch’s Wanaka ‘‘Everybody Needs a Portrait’’ series chose those who were ‘‘overlooked by society’’ and not usually asked to be portrait subjects, he said.

Subjects include people such as ‘‘the barista who makes my coffee in the morning, the girl who cuts my hair, the young guy in my son’s dance group, a woman aged 92’’.

The motivation for his subject selection came from a deep-rooted philosophy that everybody had equal worth, and also had family origins, Welch said.

One of Welch’s three children, his son Scott, has Kubaki Syndrome, a genetic disorder so rare there are only 350 documented cases internationally.

It was in Scott’s journey that Welch found the driving force behind his work, he said.

‘‘Putting emotion into brush, paint and canvas was a skill born of long nights and difficult circumstances.’’

Serving on the boards of special needs schools while Scott was young and meeting similar families, Welch saw ‘‘humanity at its best’’ in the parents and teachers who helped people like his son. He decided he ‘‘wanted to portray that truth’’.

‘‘Having a child with a disability opened my eyes to a world where individuals, their families and loved ones face these seemingly insurmountable odds, their lives affected by circumstances beyond their control and through no fault of their own. I sat with them, listened to their stories, was one of them . . .It taught me to see the things often overlooked, to see the people on the margins of ‘normal society’.’’

‘‘I made this choice, that I would be a painter that truly focused on everyone.’’

His paintings since then have included portraits of ‘‘a cool special needs dude’’, burns and accident victims, and those who have Asperger’s Syndrome.

Welch, who is donating his time for the Wanaka project and receiving no payment from it, has received support for his project from the Wanaka Arts Charitable Trust and Paradise Trust. He also headed to Paradise on Thursday to work on paintings for the series for a month.

He is hoping more financial support can be gained from the Upper Clutha community, from corporate sponsors and philanthropists, to expand the ‘‘Everybody Deserves a Portrait’’ series.

The 12 portraits from the first part of the Wanaka series will be donated to the subjects, and an exhibition from the project will be staged at the end of the year.

★ Anybody wishing to provide support for the project can email Welch at smw@smw.nz. For more information go to www.stephenmartyn­welch.com