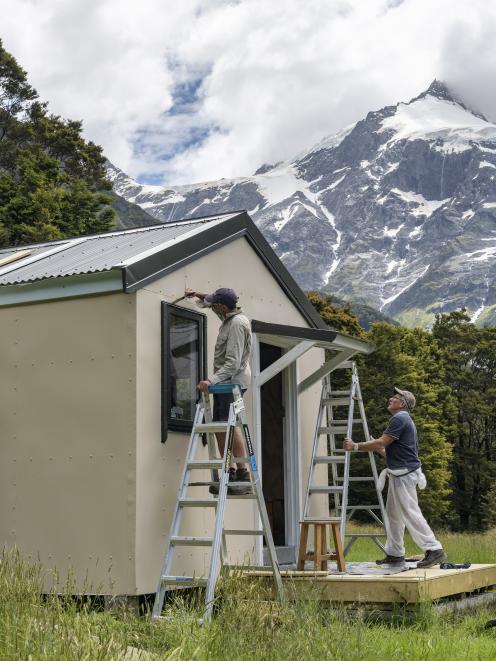 The Top Forks Hut, at the head of the Wilkin Valley, west of Makarora, was built for deer cullers and musterers on Mt Albert Station in the 1960s — before the park was even gazetted.

One of those involved in its construction was the late Alan Duncan, who was suspected of having been the model for Barry Crump’s quietly spoken character Clarence in his book A Good Keen Man.

Although the hut was on concrete piles and very well built of heart rimu, the east and west walls had been badly affected by the weather, to the point where the Department of Conservation considered demolishing it.

Instead, the Back Country Trust, with help from contractors, a helicopter operator, volunteers, government funding and donations has rebuilt the hut from the floor up, with the finishing touches being added this week.

Trust manager Rob Brown, of Wanaka, said because of all the assistance the restoration cost just $55,000, whereas replacing the hut would have cost more than $300,000.

"Looking after what we’ve got is usually infinitely more preferable.

"It’s a cost-effective way of providing good facilities for people."

The eight-bunk hut is just one of 60 to70 projects the trust is involved in across the country.

Huts still in line for work in the Makarora area are the Wills and Cameron huts north of the Haast highway.