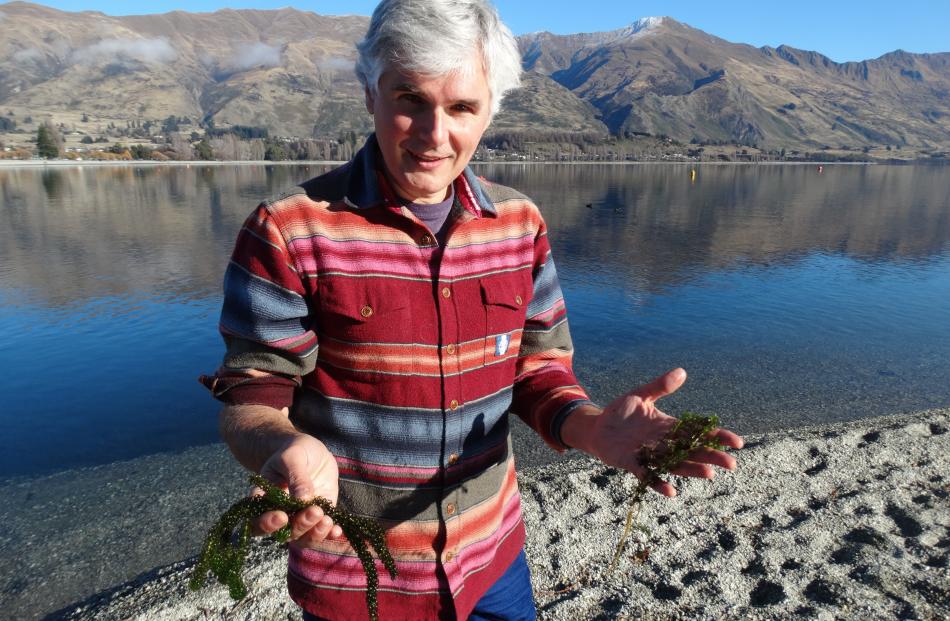 Dr Marc Schallenberg holds Lagarosiphon major (the invasive South African oxygen weed) in his left hand and Myriophyllum triphyllum (also known as water milfoil), a native macrophyte, in his right, both freshly picked from the edge of Lake Wanaka.... 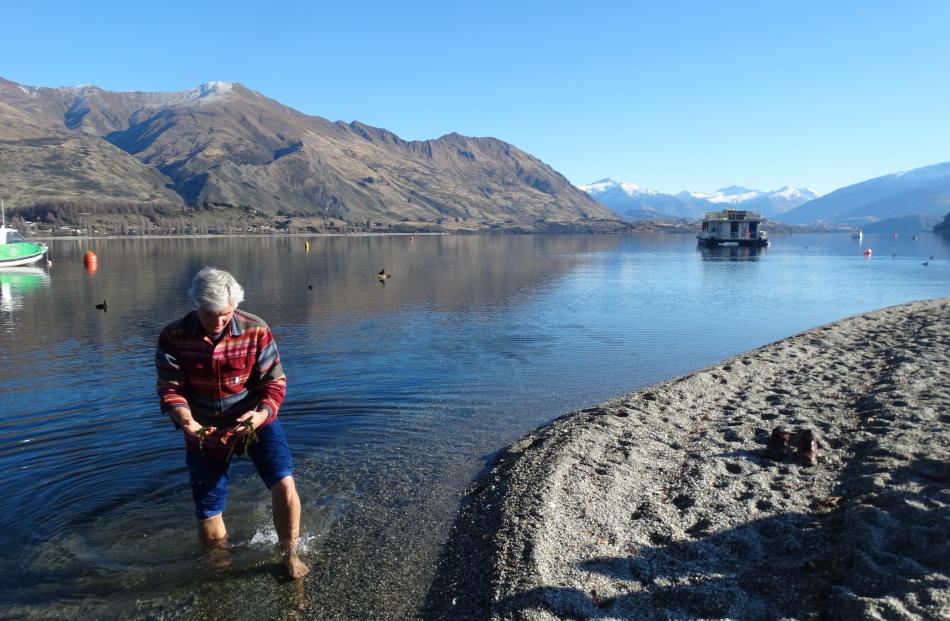 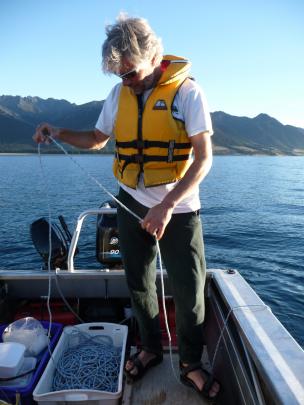 Dr Schallenberg on Lake Wanaka in 2012, lowering an instrument on a long rope to measure water quality in Lake Wanaka. Photo: Tina Bayer. 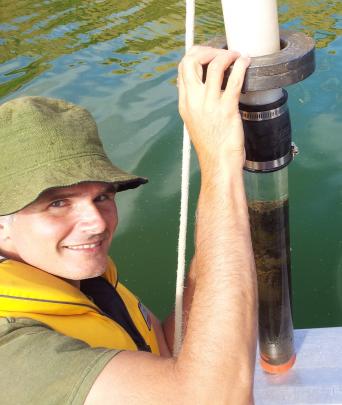 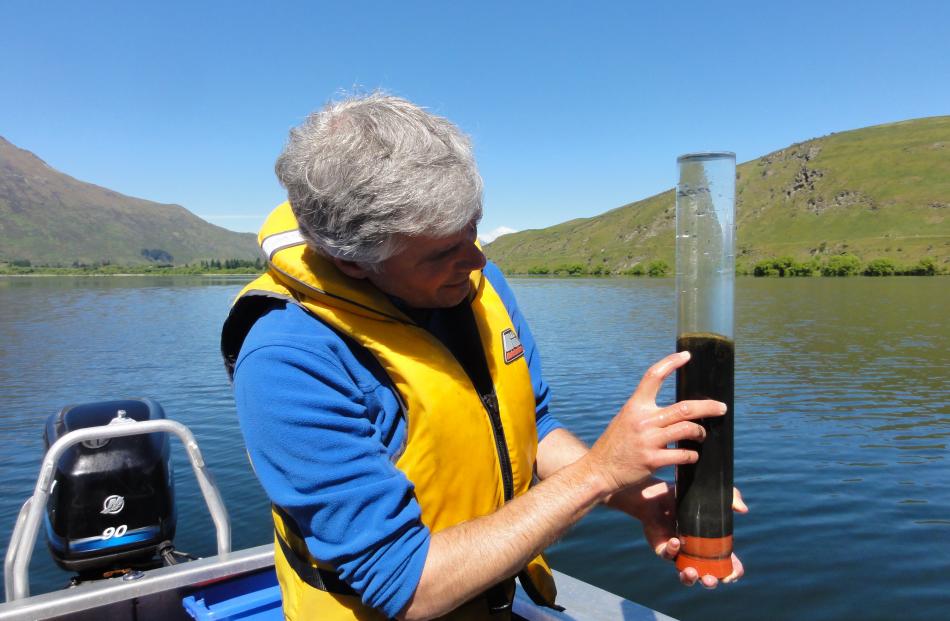 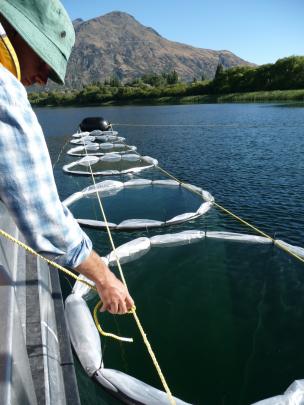 Taking limnocorrals on Lake Hayes from enclosures for experiments on phosphorus cycling in 2010. Photo: Ciska Overbeek.

Confirmation the organism that produces lake snow is in Lake Tekapo and probably undetected in most South Island lakes has put water management and quality back under the media microscope. Wanaka reporter Kerrie Waterworth caught up with the man behind a campaign to get better data on the alpine lakes and asked him why he cares.

Dr Marc Schallenberg does not like being interviewed by the media.

Halfway through our interview the Otago University research fellow and New Zealand Freshwater Sciences Society president admitted "my day is a much better day if I don’t have any interviews" and then laughed apologetically. Yet, just under a year ago, the 53-year-old ecologist made a conscious decision to step into the spotlight and draw the media’s attention to the changes that were happening in the alpine lakes. The catalyst was the discovery of lake snow in Lake Wakatipu.

"We knew it was in Lake Coleridge and in Lake Wanaka but when it got into Lake Wakatipu I thought this is now a serious national issue. It could go into Lake Taupo, Lake Waikaremoana and all through our southern great lakes and no-one is listening to me."

Dr Schallenberg has been calling for better monitoring of the alpine lakes since the day in 2008 when he and the PhD student he was supervising, Tina Bayer, dragged a net through the waters of Lake Wanaka and pulled up a sample of zoo plankton covered in lake snow.

"There was all this white floaty flocculent stuff and I thought ‘hold on, what’s this?’ I had never seen it before, including polluted lakes I’d worked on."

That day was a turning point for Dr Schallenberg, one of many he had had so far. Born in Cardiff, Wales, to Swiss hairdressers who had each gone to London in the 1960s to be at the cutting edge of hairstyling fashion, Dr Schallenberg said he almost grew up in New Zealand.

"My parents went back to Switzerland soon after I was born but decided it was far too conservative to raise a family so looked at emigrating to New Zealand or Canada. My dad said they got a price list of everyday goods in both countries but the price of nylon stockings were so exorbitant in New Zealand they chose Canada."

Dr Schallenberg spent his childhood playing in Toronto’s gullies and ravines "where you could hang out with friends and get up to mischief."

Coming from Switzerland his parents loved the Canadian wilderness, he said,  and nearly every weekend and holidays the family of now four would drive three hours north of Toronto and stay in rustic lodges and swim and fish and go boating.

"I remember the smell of the wood fires, the wooden boats, the water, the sun and the haunting sound of the loons. Everything about it was so evocative."

"I remember I borrowed a book from the school library on the history of Toronto and in it was this etching or print of people catching salmon in the Don River, a polluted and dead river near my house. It just filled me with intense anger and I thought what have they done to these amazing places that were once pristine and had these wild populations of fish?"

That experience introduced Dr Schallenberg to the "slipping baseline", where what is perceived as natural or normal is based on the changes each generation has experienced in their lives.

"I guess the injustice of future generations somehow getting ripped off by the current and past generations really spoke to me as a kid. It was a turning point that turned me on to the environment."

Dr Schallenberg was the first in his family to go to university and, being attracted to the French culture of Montreal, he enrolled in a medical degree at McGill University. It was not long before he realised it was not for him and stayed with biology subjects until the last year of his undergraduate degree, when he took a course in limnology, the study of fresh water.

"Without even trying" he got the highest mark the lecturer had ever awarded a student and was invited to do a postgraduate degree.

With a doctorate and now a wife and two children, he looked to New Zealand to do a post doc.

"New Zealand was right at the top of my list because when I was 14 I saw a film about it in a geography class and I was gob-smacked. My jaw dropped when I saw the images of the country and the lakes and the fish."

He wrote to the Department of Scientific and Industrial Research, the precursor to the National Institute of Water and Atmospheric research, as it was "doing world-class research on Lake Taupo and other North Island lakes" and received an offer to work with the new Niwa organisation in Christchurch studying Lake Coleridge.

At the end of the year in Christchurch the University of Otago freshwater scientist and lecturer Prof Carolyn Burns asked Dr Schallenberg to give a talk in Dunedin.

"I thought ‘wow, this is a really cool town’. It had so much character and you could just feel the energy of the university everywhere."

Prof Burns received a research grant and asked Dr Schallenberg to join her in Dunedin. He conducted the first ecological studies of Lake Dunstan since it was filled and studied Lake Wakatipu, which he described as a "mind-blowing" lake to work on. In Canada, Dr Schallenberg had studied wilderness lakes that were so full of contaminants from the air the fish were inedible.  In New Zealand the alpine lakes were so pure it was almost impossible to measure any changes in the water but changes were starting to happen on the land.

"When I first came up here in ’94 I had no sense of the rate of development but when you come up here every year you start to notice a subdivision where there was once a hillside or a hotel complex where there had been a holiday park. It was clear there was going to be a lot of pressure on the environment."

In 2008 when Dr Schallenberg and his student found lake snow in Lake Wanaka he asked the Otago Regional Council for all their historical lake monitoring data to see if there had been changes in the water, to try to find the cause.

"I knew there was increased housing development, there was also the land tenure process going on and herbicides had been used in the lake to kill off lake weed and there was also the lagarosiphon issue, so there were a whole lot of factors that could have contributed to the appearance of lake snow. But when I looked at the ORC’s data I couldn’t make any sense of it, because they hadn’t been using sensitive enough chemistry methods. There was 20 years of data that just said ‘below measurable concentrations’. How can you look for trends in that?"

In March 2013, after studying more than 70 New Zealand lakes from Northland to the Campbell Islands, Dr Schallenberg was invited to give an overview of Lake Wanaka at a major seminar, "Lake Wanaka  For Better or Worse? Planning for the Future", hosted by the Guardians of Lake Wanaka. Dr Schallenberg said it was "on the cusp of change" as it was facing pressures from land use change, increased presence of non-native species, climate change and lake snow.

In August of that year Dr Schallenberg became a New Zealand citizen so he could stand as a candidate in the ORC elections later that year, in the hope of "bringing a more scientific voice to its decision making," but didn’t secure enough votes. In 2014 he became president of the New Zealand Freshwater Sciences Society and has since become a familiar face and voice in the media championing the cause of freshwater science.

"It actually isn’t in my nature to speak out but my education has been funded by taxpayers, all the research I have done in my career has been funded by taxpayers and so I have a strong feeling that I need to give back to society this knowledge that I have and to work with governments. If the evidence that I presented to them was taken on board, there would be no need to go to the media or to the public."

Earlier this year, Dr Schallenberg and Prof Gerry Closs (also of the University of Otago) applied for an $8.5 million Ministry of Business Innovation and Employment grant which would have paid for 18 scientists to research and record baseline data on the South Island’s 12 alpine lakes over five years. The proposal didn’t make the first cut. It was yet another rejection of an attempt to secure funding to study the alpine lakes.

"I honestly don’t know why the proposal didn’t make it through even the first round.  If we knew why, we could change the way we write the bids.

"Considering how high the environment is in the public’s perception, how water is the number two issue behind the economy, how we have pest issues, invasive species issues, potentially climate change issues, sea level rise, you would think that a country like New Zealand whose reputation rests on the environment would be putting more money towards looking at these problems than it does."

Dr Schallenberg said he was now considering all options to fund his research, including crowd funding.

"I think some people consider these lakes to be very resilient because of their big size but the evidence from overseas suggests they’re actually very sensitive and that’s why we need to be looking at them very carefully and monitoring them. That’s why I’m getting out there in the media."

At that point, I said the interview was finished and Dr Schallenberg breathed a sigh of relief.