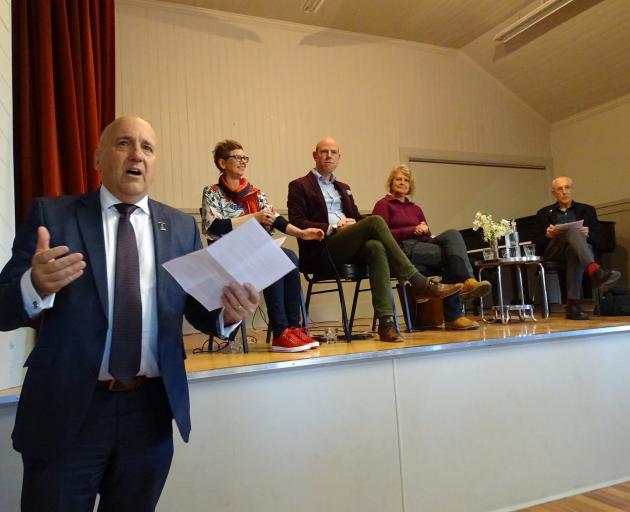 Central Otago Mayor Tim Cadogan opens the ninth annual Across the Bridge festival on Tuesday night in Bannockburn, ahead of the Big Conversation panel discussion on the future of tourism. On the stage are panellists (from left) tourism strategist Sarah Bennett, writer and journalist Max Rashbrooke, Kathmandu co-founder and Riverrun Luxury Lodge owner Meg Taylor and Wanaka Festival of Colour director Philip Tremewan. PHOTO: KERRIE WATERWORTH
A minimum stay for tourists, a road toll for the Milford Rd and developing cycle trails in remote places were suggestions from a panel considering the topic of how to "reset" the tourism industry when the borders reopen.

A nearly capacity audience of 80 people attended the Big Conversation session, part of the Across the Bridge festival at the Bannockburn Coronation Hall on Tuesday night.

Panellist Sarah Bennett, a tourism strategist and former Lonely Planet writer, described herself as an inveterate traveller, but said she had had an "epiphany" two years ago when she was flying from London to Florence among a mass of other planes.

"There was so much air traffic in the sky and where there was not air traffic there were vapour trails criss-crossing the sky — there were planes everywhere.

"When we arrived in Florence we were herded like cattle through the airport and I literally had this epiphany where I thought ‘this is gone wrong, maybe we have reached a tipping point’."

Kathmandu co-founder and Riverrun Luxury lodge owner Meg Taylor also spoke on the panel, and said everything had reached a tipping point, not just tourism.

"The pressures on the world are massive, such as the amount of plastics, and a lot of that has to do with population.

"The increasing volume of people who are becoming wealthier and able to travel, like the huge middle class coming out of China, are contributing to the large numbers of tourists visiting countries including New Zealand."

The third panellist, writer and journalist Max Rashbrooke, believed a cap on tourist numbers would be too difficult to manage and could be undemocratic.

He made the point immigration numbers were capped, but those who had more money got more points.

"Do we want tourism to work that way?" he asked.

All three panellists agreed that as well as the Covid-19 crisis, climate change, carbon pricing and the need to reduce reliance on fossil fuels would be the biggest drivers of change in the tourism industry.

Ms Bennett said in recent months she had been talking about what was necessary travel.

"There has to be some degree of travel, I am accepting that, but there needs to be some serious behavioural change," Ms Bennett said.

Ms Taylor suggested introducing a minimum stay for international tourists would be a more egalitarian way to reduce the number of tourists to New Zealand and increase their dollar value at the same time.

Mr Rashbrooke said he believed the big decisions about tourism should not be decided by market forces.

He said the price put on carbon needed to be decided collectively and suggested New Zealand follow the French Government’s example of creating a citizens’ assembly made up of 100 citizens who made the recommendations for how the nation could meet its climate goals.

In the audience was New Zealand author Kate De Goldi, who said she found the discussion "timely and sobering".

"I think the whole thing speaks to really big questions about consumption and growth and how we live in the world," Ms de Goldi said.