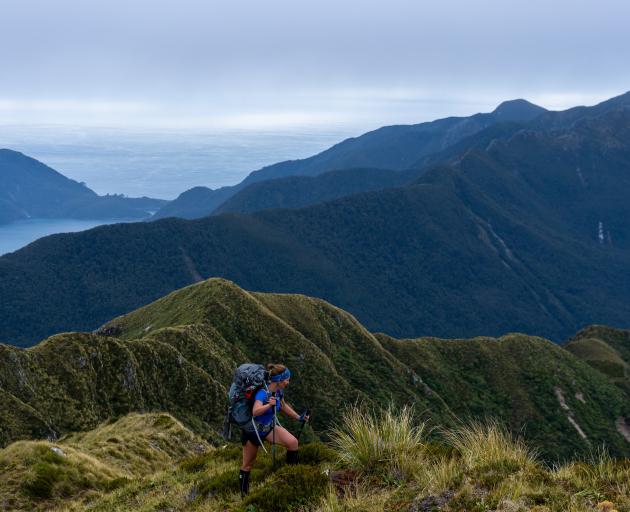 The adventure had a few purposes: to promote resilience and demonstrate women can do anything, to make an adventure film with Wanaka videographer Ben Wallbank, and to prove to herself she could conquer her fears and alpine inexperience.

"It was the most amazing experience I have ever had, really high highs, and — not really low lows but — some things were really quite hard," she said.

At times she questioned what she was doing but kept going because she had had the "audacity to start and face potential failure".

"A lot of people didn’t think I could do it," she said.

Ms Bottomley and Mr Wallbank were dropped by helicopter on to an unexplored ridge in the Fiordland wilderness on January 28.

The pair scampered off on a three-day trek to Caswell Sound Hut.

The first day was nearly their undoing. They lost their packs down a 100m boulder bank.

"That was horrifying to watch."

Mr Wallbank’s phone and the screen of their satellite tracking device was smashed.

Fortunately, Ms Bottomley’s phone, their drone and their camera survived.

"We had some very sobering reflections on our first day."

For the next two days, they climbed waterfalls and steep-sided mountains and slept a night on a small 2m by 2m ledge.

There was no running, which the experienced ultradistance runners had been hoping to do.

The pair could still use their satellite tracking device to send and receive messages, including advice from experienced mountaineers.

"The grandeur — there is nothing like it, or thigh-deep bogs," she said.

"Things always look way scarier from a distance. Once you get there, you can figure out how to overcome," she said.

There is a book in those three days alone, as well as the rest of journey across Lake Te Anau, through Central Otago, and ever onwards, despite heat exhaustion, illness and occasional re-routing, to Oamaru.

The key messages would probably include "do up your bags", drop petty complaints about life, have compassion and "there is a way", Ms Bottomley said.

The adventurers finished on February 24, in time to make a friend’s wedding two days later.

Ms Bottomley was nominated this week as a finalist in the 2022 Queenstown Women’s Refuge Inspirational Women Awards.

She has been promoting her message of female empowerment and life beyond domestic violence for three years.

The award winner will be announced in Queenstown on November 19.