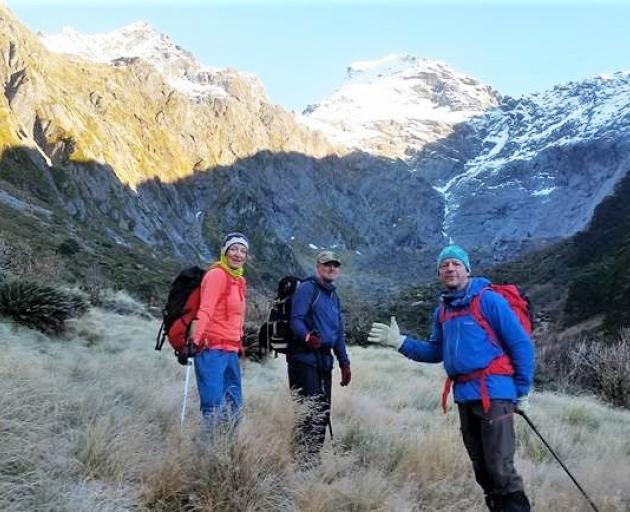 Predator-control programme a turning point ... International mountain and ski guide Lydia Bradey became the patron of Aspiring Biodiversity Trust following a trip checking traps with Anthony Coote and Dean Staples in the Crucible Basin. PHOTO: PERRY BROOKS
Seeing first hand the number of predators caught in traps in remote alpine valleys has prompted one of New Zealand’s most well-known mountain climbers and guides to become the patron of a trust set up to protect and restore indigenous biodiversity.

In 1988, Lydia Bradey became the first woman to climb Mt Everest without supplemental oxygen and went on to climb the mountain five more times.

In autumn, Ms Bradey joined a team from the Aspiring Biodiversity Trust clearing and resetting traps in the Makarora catchment.

Four stoats and mice were found caught in traps along a line up to Lake Crucible as well as stoats on other trap lines.

Trust spokeswoman Rachel Hufton said there had been an alarming increase in stoat activity among monitored rock wren territories in two separate basins in the Wilkin and Siberia Valleys.

Rock wrens are New Zealand’s only true alpine bird and one of only two surviving wrens of six species known to have once existed.

They nest on the ground, are poor flyers and are easy targets for introduced predators such as stoats and rats.

Ms Hufton said Ms Bradey was ‘‘the right fit for ABT’’ having spent many years in wild places.

As patron she would not only promote the trust’s work protecting and restoring indigenous biodiversity but also connect people with nature.