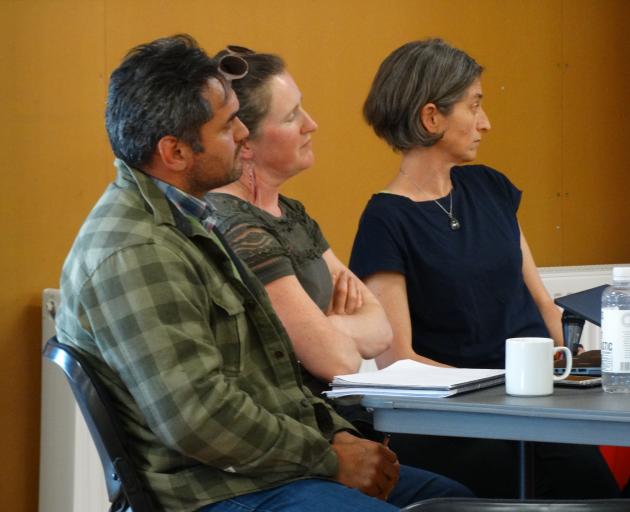 Planners involved in the process of including places of significance to Maori in the Queenstown Lakes district plan listen to the opinions of about 25 Lake Hawea residents on Thursday night, at the last of nine consultation meetings. They are Aukaha planners Cassino Doyle and Maree Kleinlangevelsloo, and Queenstown Lakes District Council senior planner Sarah Picard. PHOTO: MARK PRICE
"Arbitrary lines" and a lack of detail were the main criticisms of Wahi Tupuna mapping at a Lake Hawea public meeting on Thursday night.

The maps show sites of significance to Maori and are set to become part of the Queenstown Lakes district plan, now being reviewed.

Once the policy is adopted, property owners in areas marked on the map will need to consult Ngai Tahu before carrying out developments.

Owners of Lake Hawea Station Geoff and Justine Ross told the meeting they were aware of, and respectful of the ancient Maori trail running through their 6600ha property.

However, Mr Ross said they were concerned at the broad expanse of land regarded as Wahi Tupuna.

"Pretty much all of the station is a blanket map ... yet areas of cultural significance are quite specific and quite small.

"So why a blanket map when the real interest is in some key areas?"

Mr Ross said being included in the Wahi Tupuna area would mean they would have to consult Ngai Tahu on recreational activities, building, water use and earthmoving.

Having to consult on those things was "quite a hefty burden on day-to-day farming".

Chairwoman April Mackenzie questioned why Wanaka and Queenstown urban areas were not included, but part of the Hawea township was.

As one of the affected property owners, Ms Mackenzie said the proposed Wahi Tupuna designation was causing anxiety.

And another speaker asked why the line through the town was straight, and did not follow the topography.

He suggested the lines were "arbitrary".

Planners for Aukaha - the company working on the proposal for Ngai Tahu - Cassino Doyle and Maree Kleinlangevelsloo, told the meeting the information came from Ngai Tahu elders, that it was not necessarily perfect and urged those attending to make submissions.