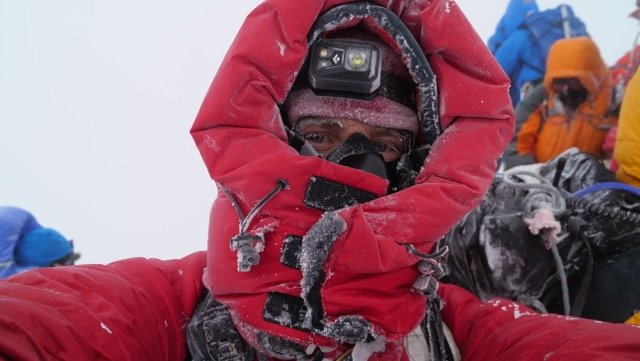 Scott Simper (52) had been in Nepal since February and was on his second film shoot, making a documentary about Sherpas for a Canadian production company, when he caught Covid-19.

His wife, Wanaka mountain guide and former ski and adventure racer, Anna Keeling, said her husband believed he caught the virus somewhere between Mt Everest base camp and base two, then incubated it until he summitted on May 11.

It was his third ascent of the world’s highest mountain, but was his worst in terms of how he felt.

"He’d had an 18-hour day filming above 8000m the whole time, he felt really, really unwell and was just exhausted."

Respiratory conditions were very common on Mt Everest due to dust, dry air and the exertion of being in high altitude but Mr Simper suspected he had Covid.

Ms Keeling said when Mr Simper arrived back at base camp he was coughing badly but local doctors did not test for Covid-19.

It was not until he returned to Kathmandu he found out he had the virus.

Mr Simper was in a bubble of about 10 people. Some tested positive and some did not.

She said some of the group did not get tested, such as the Sherpas, because they returned to their villages.

Mr Simper was not hospitalised and the staff at the hotel where he was quarantined were "enormously proactive", taking the best care of him they could, Ms Keeling said.

"The entire country as well as the Kathmandu Valley has been really strapped by Covid, yet the level of compassion he received was pretty extraordinary."

Ms Keeling was a speaker at the Southern Hemisphere Alpine Conference in Wanaka last week when Mr Simper was still in quarantine in Kathmandu.

As well as waiting on a negative test, there were also no flights into or out of the country.

On Monday, Mr Simper sent word he had arrived in the US.

Ms Keeling said due to Covid and border lockdowns Mr Simper had only had one other filming job in the past year.

"I would have preferred he had not taken the jobs [in Nepal] but I am not the boss of him.

"We have a mortgage and expenses, and a tough ski season last year with no Australians compounded issues. I am a mountain guide and I have a lot of clients who are New Zealanders but ... it was not quite enough to make ends meet.

"Scott felt he needed to take them, I kind of wish he hadn’t gone but I understand why he did."

Ms Keeling said a “huge weight” was now off her mind with Mr Simper on his way home but she feared for those remaining behind in Nepal.

Donors can help the people of Nepal deal with Covid-19 crisis by giving to the New Zealand-based Himalayan Trust.