Development West Coast says the $5million it has released for the glacier towns is intended to protect the social and economic fabric of the community. 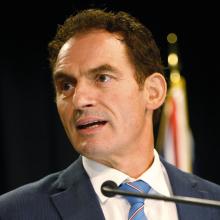 Tourism Minister Stuart Nash. Photo: AP
DWC acted this week in response to the desperation felt at Franz Josef Glacier and Fox Glacier, where dozens of businesses and hundreds of jobs are at risk over the next few months without economic help.

Before the pandemic and the border closures, the glacier towns were 90% reliant on international tourists.

DWC chief executive Heath Milne said it would decide how the $5million was distributed after consulting with the community via Glacier Country Tourism.

Tourism Minister Stuart Nash, who visited Franz Josef for himself this week, challenged DWC to step up and release more of its $128million funds, suggesting it should be at least double the $5million committed.

Originally, the West Coast Development Trust, it was set up with government money in 2001 in return for terminating the native logging industry on the Coast.

Mr Nash rejected calls from DWC and Glacier Country Tourism for an immediate $35million package for Franz and Fox.

"Given the gravity of the situation in the glacier country, we believe there is still a good opportunity for Government to work with local communities to help protect their social and economic fabric, and ensure they are ready and able to significantly contribute to the national economy once again when it rebounds."

A recent survey conducted by DWC and Glacier Country Tourism found 62% of jobs have already been lost, 16% of businesses have closed, at least 23% of people have left, and the area has experienced significant losses of volunteers in key community services.

It is forecast that in the next six months, if there is no additional support, 84% of jobs will be lost, 67% of businesses closed, and at least 31% of people will leave.

Mr Milne said the glaciers were a key contributor to the economy of the wider West Coast region.

"When we come out of this situation, and international tourists return, if that community isn’t there to host them, it is going to have an impact on the whole country.

"The true value of glacier country goes far beyond its significant economic contribution. Over 1170 West Coasters have built lives and families in the area, with many contributing to the wellbeing of their small communities through volunteer services."

Mr Milne said it was about the teachers, builders, electricians, and the volunteers providing fire and emergency, ambulance and search and rescue services.

"This is about the social fabric of the area. The community down there will not survive unless there is some form of support."