Funding for rockwork to secure dump 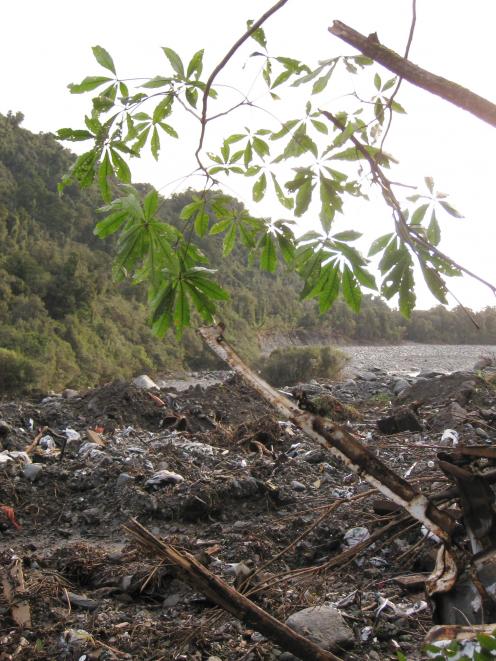 The Fox Glacier landfill.PHOTO: ELSPETH MCLEAN
The Westland District Council yesterday reluctantly agreed to spend $465,000 it does not have, to put in rockwork while it digs out the remaining Fox Glacier rubbish dump to prevent it being further scoured by flooding.

The money - which will apparently be loan-funded - was unbudgeted.

It will pay for rockwork to keep the rest of the old buried landfill safe while the council finds a new dump site in the wider glacier area.

The council is also talking to the Ministry for the Environment about funding.

The mess left when the landfill was breached by a massive flood in the nearby Fox River on March 26, has only just been tidied up after the Government stepped in and put the volunteer clean-up under the Department of Conservation with help from the NZ Defence Force.

"I could see us spending a lot of money which we haven't got," deputy mayor Latham Martin said at the council meeting yesterday.

"There's no easy answer. We definitely have to do something."

Chief executive Simon Bastion said the challenge was to get the rock protection in before the spring rains. Contractors were lined up to do the work.

However, even then, the rockwork was only expected to buy time, he said.

"We can't sit on our hands," Cr Durham Havill said.

Cr Jane Neale said the future need was to minimise the rubbish being generated by tourists at the glacier townships.

"We need to get tourism operators on board. Is there an opportunity with the tourism levy?"

"There is concern, both internally and externally, including from the Department of Conservation, about the possibility of reputational and environmental risks if another significant weather event occurs and no further works have taken place since [the council's] preliminary rock protection and geofabric work," Mr Bencich said.

Resource consents would be required for a new landfill.

In the meantime, 20,250 tonnes of rock was needed for the interim protection measures. Doc had signalled that contractors could take the rock from the Fox River bed.

If the weather was good, that work would take about 25 days, he said.